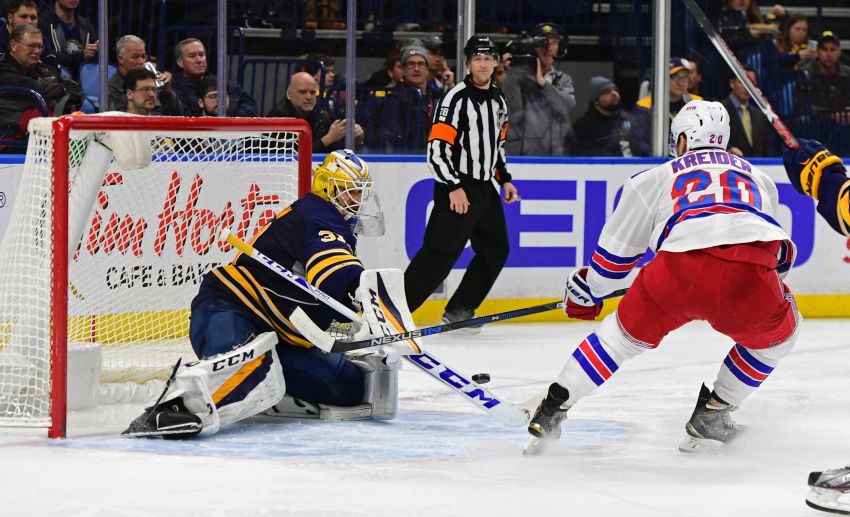 BUFFALO – Very quietly, after years of ineptitude on home ice, the Sabres have recently morphed into a strong team at KeyBank Center, winning four straight games.

Of course, four consecutive home victories isn’t overly impressive. But for the Sabres, who haven’t finished above .500 at home since 2012-13, the streak represents progress.

It also gives them some hope. With each loss, their slim playoff chances decrease. But tonight’s tilt against the New York Rangers kicks off a stretch in which the seventh-place Sabres play 11 of the next 16 games at home.

“It’s big for us, especially the situation we’re in now,” Sabres defenseman Cody Franson said Wednesday. “We’re in a dogfight, and to have that advantage of playing at home and having the shorter end of the travel stick is definitely beneficial to us. We got to make sure we take advantage of it. That’s what good teams do in these situations.”

Sabres winger Tyler Ennis said: “We got to treat every game as a playoff game from here on out.”

Not surprisingly, the normally quiet home patrons have reacted to the excitement, consistently making noise for perhaps the first time in years.

After years of being beaten down by losing, the fans love having something positive to cheer about. The Sabres hadn’t won four straight home contests since December 2014.

“It’s a lot of fun to play in front of these fans here,” Franson said. “They’re passionate people. … They’ve been waiting for change for a long time. We’re trying to give them that change. They’re responding. We really feed off the crowd when it gets going. That extra bit of momentum in tight situations in games is something we feed off.”

The Sabres haven’t played here since beating Detroit in 3-2 in overtime Jan. 20, a contest in which Ryan O’Reilly tied the game late before Kyle Okposo’s winner.

“We’ve played a fast game, a game to the offensive zone and been a tough team to handle at home,” Sabres coach Dan Bylsma said. “That’s really where we’ve had our success in our games and had our success, whether it’s home or the road.”

The Sabres, however, have been struggling on the road, where they’ve lost two straight games, including Tuesday’s wretched 5-2 loss in Montreal, arguably their worst setback all season.

“(Tuesday’s) game we have to throw out the window because it was horrendous,” Sabres winger Marcus Foligno said.

Bylsma said: “We got beat badly.”

Defenseman Zach Bogosian, whose play had surged in recent weeks, was a stunning -5. The NHL record is minus-7. Bylsma broke up the Bogosian-Franson duo late in the game.

“That can’t be how we play,” Bylsma said. “That can’t be who we are as a group. Zach’s part of that. That’s not who Zach is as a player. That’s not how he’s played for us over the past seven, eight, nine, 10 games.”

At 31-18-1, the high-scoring Rangers are one of the Eastern Conference’s best teams. But the Sabres have handled them well this season, beating them 4-1 on Jan. 3 in New York and roaring back from a two-goal deficit to win 4-3 at home Dec. 1.

“We’ve done a good job of negating their long play and their speed on two accounts, with our forwards being on top of their plays and with us putting pressure on their defenders to not be able to make those long plays, not be able to flip pucks up the ice,” Bylsma said. “We’ve had success and had opportunities because of that going the other way.”

Rangers goalie Henrik Lundqvist, one of the NHL’s best for years, has shown strong signs of graying this season, compiling the worst numbers of his 12-year career. After getting yanked from Tuesday’s 6-4 loss to Columbus, the 34-year-old Swede is 21-13-1 with a 2.78 goals-against average and a .905 save percentage.

The league-average save percentage is .912, according to hockey-reference.com.

“He’s to the point, given a good report by the doctor, (he) could be working back to playing with his skates,” Bylsma said.