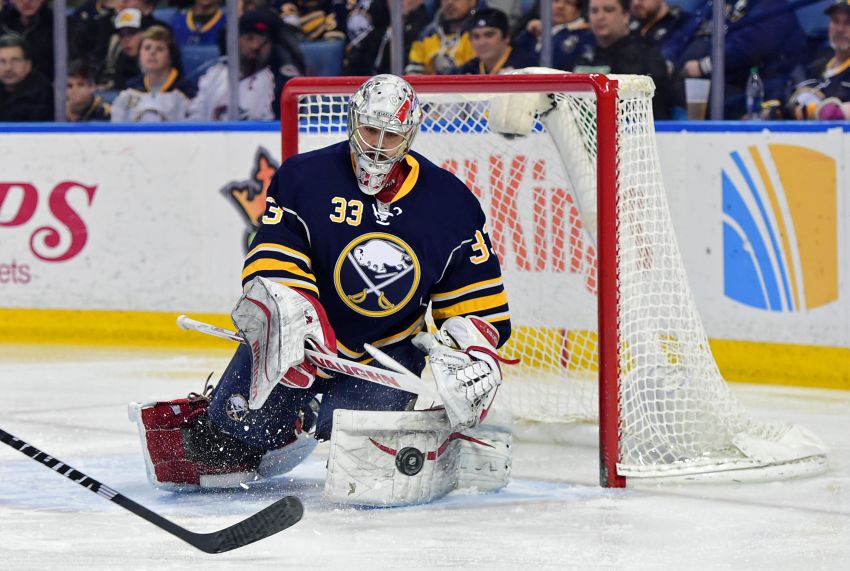 BUFFALO – In the big picture, failing to hit a .500 points percentage, a notable mark the Sabres sorely wanted, shouldn’t matter much.

The Sabres’ 4-1 loss in Friday’s home finale to the lowly Columbus Blue Jackets secured their third straight losing season (34-36-11), and like so many other home games recently, they let a weak opponent exploit them.

That they couldn’t hit it shouldn’t diminish the progress they’ve made this season following consecutive 30th-place finishes. With 79 points, they’re 25 points better than a year ago.

“One game under, one game over … you still have to improve, and we improved this year, and we’re a better team because of it,” Sabres winger Marcus Foligno said.

They close the season tonight on the road against the New York Islanders. Eighty points, something else Bylsma has targeted, is still attainable.

The Sabres played well for stretches Friday before a capacity crowd of 19,070 on “Fan Appreciation Night,” although a few mistakes burned them.

Kasdorf, 23, an afterthought in the blockbuster trade with the Jets that brought defenseman Zach Bogosian and winger Evander Kane here last season, has quietly become a notable prospect.

The R.P.I. product, a 2011 sixth-round pick by Winnipeg, signed his entry-level contract last month. He spent about two weeks rehabbing a groin injury he suffered in his final NCAA appearance before joining practice last week.

Kasdorf made 26 saves, including 13 in the first period.

“I felt confident all game … felt like I was controlling most of my rebounds,” Kasdorf said.

He added: “I knew that it would be fast and I knew that they can shoot the puck. It’s basically everything I expected.”

The 6-foot-3, 172-pound Kasdorf found out Thursday he would start. About 17 family members, many of them from Winnipeg, attended.

“It’s an amazing experience to play in the NHL,” Kasdorf said. “It was lots of fun. I thought the guys battled really hard in front of me. It was awesome. It was just a really special game for me.”

Kasdorf wants to use the game as a “building block.”

“We gave up some pretty good opportunities, especially the second or third one, golden opportunities he wasn’t able to stop,” he said. “I thought in the first period, with the (14) shots he faced, I don’t know if he was ever able to get comfortable in net.”

Schneider, meanwhile, became the sixth Buffalo-area born player to play for the Sabres. After 278 AHL games, Schneider, 25, started the game on the right wing with center Ryan O’Reilly and Zemgus Girgensons with about 50 family members and friends watching.

“Incredible experience, wouldn’t want to do it anywhere else but here,” Schneider said.

In 12 minutes, 54 seconds of ice time, Schneider had two shots on goal.

“I was trying not to make any mistake out there, but I thought I played all right,” he said. “I’d like to do it again sometime.”

Rodrigues, 22, started on the fourth line and eventually moved up for some shifts. In 10 minutes, 10 seconds of ice time, he pumped five shots on net.

“I thought they both looked pretty good,” Bylsma said. “I thought Cole looked comfortable with the pace and making plays and made a couple of good ones, has a couple of opportunities around the net. I thought Evan … he was every bit (as tenacious as training camp).”

In other news, Bogosian left the game with a lower-body injury early and is out tonight, Bylsma said.

One thought on “Sabres fall in home finale to Blue Jackets, won’t hit .500”