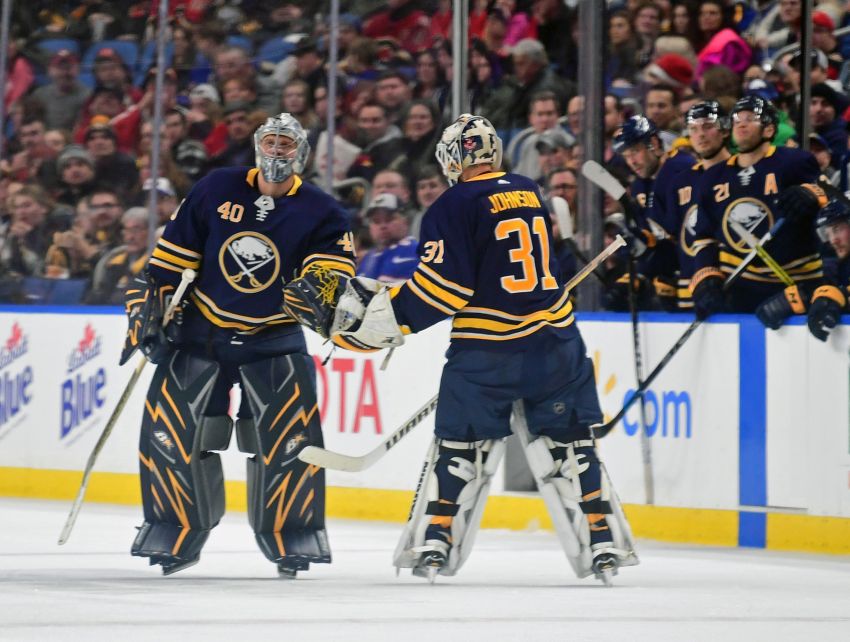 BUFFALO – Eight hours before the Calgary Flames throttled his team 5-1, coach Phil Housley talked about the Sabres’ need to match their opponent’s desperation.

The Flames came into town reeling, losers of four straight games and seven of the last nine. Without injured No. 1 goalie Mike Smith, they’ve fallen out of a playoff spot.

“They’re three points out of a playoff spot, they’re talking about this as their season, these next two games against us and Ottawa,” Housley said Wednesday morning.

The Flames left Buffalo with a dominating victory that could buoy a run to the postseason.

Incredibly, the Flames had never won a game in regulation at KeyBank Center, which opened in 1996. Their last 60-minute win in Buffalo before Wednesday came March 15, 1996, at Memorial Auditorium.

The Sabres, like so many other times, imploded early, falling behind 2-0 8:35 into the game. By the 6:01 mark of the second period, after the Flames scored twice in a span of 1:01, Housley yanked goalie Chad Johnson.

“Standing around and watching,” a dismayed Housley said following the game. “I talked about their desperation. They got the start they wanted and we didn’t have a pushback. From top to bottom, it was really ugly. It’s disappointing, because you think we’re going in the right direction.”

When the period ended with a 5-0 deficit and Robin Lehner in net, many fans in the crowd of 17,773 booed the Sabres off the ice, a regular occurrence this season.

Watching it all in a blue Jack Eichel Sabres jersey was Buffalo Bills wide receiver Zay Jones, who attended his first hockey.

“I hope he’s coming to another one, that’s for sure,” Sabres center Ryan O’Reilly said.

Blowouts are nothing new to the 30th-place Sabres. They’ve endured them all season. But slowly, they seemed to be turning a corner in recent weeks.

“It’s disappointing, because you think we’re going in the right direction,” Housley said. “I understand we had an emotional win against Toronto, but that’s just where we’re at as a team right now, the consistency to get up for a team that’s desperate.

“You look at the games like Tampa, Boston and Toronto, they’re easy to get up for, and Calgary comes in here, which is a desperate team, and we didn’t match that desperation.”

How does that change?

“It’s about preparation and being a good pro,” Housley said. “The learning curve of this team is measuring your consistence, game in, game out. You can say it was an off night, I don’t agree. We had a little too much cheat, not enough compete, losing puck battles all around.”

The 18-save outing ended Johnson’s three-game winning streak. Very quietly, since beating the Flames on Jan. 22 in Calgary, Johnson had been one of the NHL’s hottest goalies.

On Tuesday, Johnson, who played for the Flames last season, credited his teammates’ improved play for much of his success. A day later, they often hung him out to dry, allowing the Flames to pepper 17 shots on him in the first period.

Johnson didn’t care much he lost to his old team.

The Sabres couldn’t exploit Flames rookie goalie David Rittich, who was 17.1 seconds away from recording his first NHL shutout. The Czech had allowed 24 goals in his last six outings, including seven last week in an ugly loss to the Vegas Golden Knights.

Right before defenseman Casey Nelson scored the Sabres’ only goal, some fans in the 300 level starting chanting, “We want Dahlin,” as in defenseman Rasmus Dahlin, the presumptive No. 1 pick in the 2018 NHL Draft.

The Sabres play a road tilt tonight against the Ottawa Senators.

One thought on “Sabres fall behind early, lose to Flames”