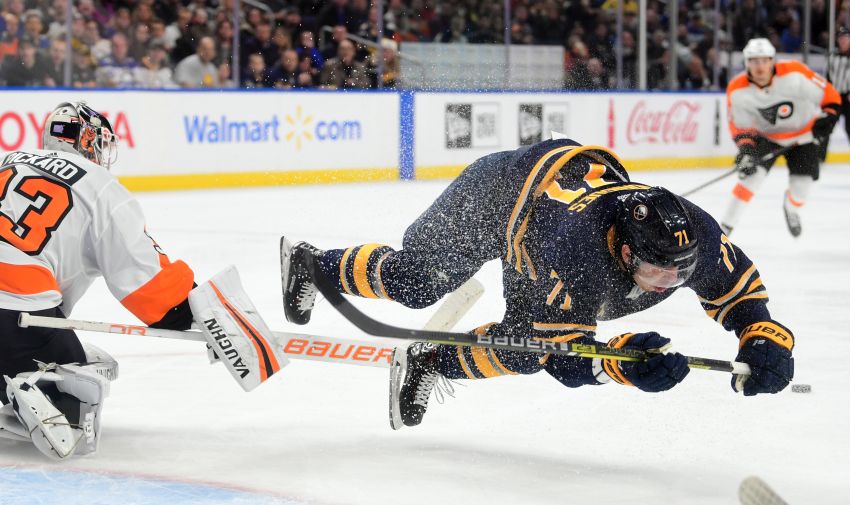 BUFFALO – The Sabres sensed it right away, before the game even started. After about 8,000 fans watched them warm up, they knew it could be a special night inside KeyBank Center.

“It was talked about coming off the warm-up,” center Johan Larsson said following Wednesday’s exciting 5-2 victory over the Philadelphia Flyers, the Sabres’ seventh consecutive win. “We had a little feeling it was going to be buzzing.”

The rink buzzed like it hasn’t in years during a rollicking first period in which the Sabres annihilated the Flyers, opening up a 4-0 lead.

Jeff Skinner scored 3:38 into the contest. Tage Thompson followed at 5:20 before Evan Rodrigues’ power-play goal at 8:55.

The capacity crowd of 19,070 ate it all up. Larsson’s goal at 19:52 might’ve generated the biggest roar. Well, at least before Larsson fought Scott Laughton three seconds later.

When the first period ended, the fans gave the Sabres a standing ovation.

“Our guys were really focused and on our toes and we really attacked the game in the first period,” Sabres coach Phil Housley said. “We shot pucks off the rush, we got pucks to the net, the power play scored a big goal.

“But it was the start that we were looking for, especially coming back home and to a big crowd. The fans were awesome tonight.”

This city had been waiting a long time to experience a game like Wednesday’s. The Sabres haven’t played meaningful late-November games in about seven years. They haven’t won seven straight contests since winning the first 10 games of the 2006-07 season.

Usually they’re out of it by now, buried at the bottom of the Eastern Conference.

Fans were itching for the Sabres to return home. They morphed into the NHL’s hottest team by winning their last three games on the road.

“The energy in the building was really electric tonight,” said Thompson, who scored for the second straight game.

He added: “It jumpstarted, got us going.”

The crowd helped the Sabres pounce on an opponent for the first time during their streak. They’ve been living dangerously, overcoming third-period deficits five times.

“It’s progress from the last few games of not starting the way we wanted,” Sabres captain Jack Eichel said. “Full 60 minutes is what we’re looking for. I thought we played the majority of the game we wanted to. There’s some of it we probably wanted to have (back).

“It was good to make that type of impression on our fans after coming home. Get them into the game and play with the lead.”

While the Flyers pushed back and narrowed it to 4-2, the Sabres never totally lost control.

Clearly, the Sabres are building something special. Right now, they’re 14-6-2. Their 30 points rank third in the ultra-competitive Atlantic Division and fourth overall. They’re just one point behind the Tampa Bay Lightning for first in the division.

“We talk about just being even keeled, not being too high, not being too low, because there’s going to be parts of the game we’re not going to be able to control,” Housley said. “So how do we react to that adversity? … This group is getting tighter and tighter every game through this winning streak.”

Rodrigues said: “I don’t think this room has any plan of stopping. We’re going to do whatever we can to keep this rolling. It’s a good feeling.”

Against the Flyers, secondary scoring and role players helped buoy the Sabres. Larsson ended a 31-game goal drought and fought for only the third time in his 274-game career, according to hockeyfights.com

“Larry plays with such an edge,” Sabres defenseman Jake McCabe said. “We call him ‘Angry Larry’ for a reason. He’s an angry Swede out there, but that’s just Larry for you. He has a great goal then a second after, drops the glove at center ice with the other centerman. The building was going crazy. It’s a lot of fun to play in front of that crowd.”

Rodrigues, meanwhile, ended a 20-game goal drought in his return after being scratched three straight contests.

“You could (see) that he was itching to get back, he was attacking the game,” Housley said.

Rodrigues said: “It was definitely huge to get that proverbial monkey off the back. It’s the first of many, I feel like.”

One thought on “Sabres extend winning streak, get huge assist from crowd”