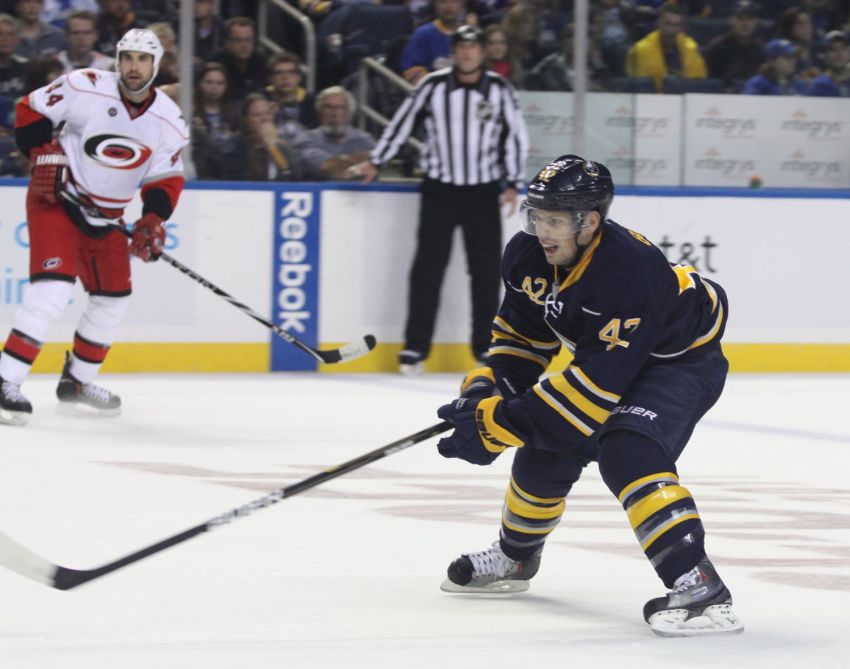 BUFFALO – The defensive style winger Nathan Gerbe has embraced and played so well this season isn’t quite a full-fledged checking role. No way. The Sabres still expect Gerbe to score, something he’s done only six times this season in 60 games.

“I think people want to use checking role. We never, per say, said ‘checking,’” Ruff said about Gerbe’s role Tuesday prior to the Sabres’ 6-5 overtime win against the Toronto Maple Leafs inside the First Niagara Center. “He had great opportunities to put pucks away in the middle of the year where … he missed the net a lot. …

“I think sometimes using the word ‘checking’ is a copout.”

Gerbe, a collegiate and AHL scoring star, is experiencing his worst offensive year ever. He tallied 16 times last season, scoring at a 30-goal pace during the second half. The 24-year-old has one goal in his last 19 games and two in 32.

“That’s not the best,” Gerbe said. “That’s not exactly what I would want.”

Prior to his injury, Gerbe liked other aspects of his game, saying he was “playing well, skating well.” In February, he was one-third of a strong checking trio with Paul Gaustad and Patrick Kaleta. He skated on some other lines after the Sabres traded Gaustad to Nashville.

Gerbe played only 8:07 with Kaleta and Cody McCormick on Tuesday, as Ruff shortened the bench.

“I was put in a role to be a defensive left wing on our line there,” Gerbe said about his role in the winter. “I thought as far as that we were doing pretty well. We were keeping the top players off the score sheet and we were winning games. That’s the most important thing.”

“Offensively, I want to be a threat and I want to produce on the other end, and so I got to keep doing that,” he said.

Gerbe was hurt during the morning skate March 14. He had been stuck in an “80-90 percent range,” Ruff said.

“Weird, not much I can do about it,” Gerbe said about the injury. “It was pretty frustrating, pretty weird. It’s one of those things you just got to kind of forget and focus on getting better.”

With Gerbe back, the Sabres scratched struggling forward Brad Boyes, who has six goals in 64 games.

“No, no it didn’t,” Hecht said Tuesday morning following a long on-ice workout.

“It was a tough pill to swallow in Jersey, but that was something you can’t decide right then,” Hecht said. “I can get through my days. I just want to make sure this doesn’t happen again.”

Right now, Hecht’s practicing in a non-contact role. He’s felt normal for about three or four weeks. He still must pass his baseline test and be cleared for full practices.

“I feel good out there,” the German said. “I get through practices. I got a lot of conditioning to do.”

He can’t put a timetable on a return if the Sabres make the playoffs.

“We’ll see how all of this progresses,” said Hecht, who’s played only 22 times this season. “My conditioning has to get better.”

“You can’t help,” Hecht said. “You see mistakes that they made that they would probably make, too. But you see the solution out there right away when you watch the game. It looks a lot easier from upstairs.”

Notes: With a goal and two points, center Tyler Ennis has 11 scores and 27 points in the last 24 games. The Sabres are 15-3-5 when he records a point. … Defenseman Alexander Sulzer had a career-high three points (two goals, one assist). … Defenseman Robyn Regehr played his 900th NHL game. … The Sabres have won 11 of their last 12 home games versus the Leafs. … The Sabres last rallied from a three-goal deficit to win on Jan. 1, 2010, a 4-3 overtime decision against Atlanta.