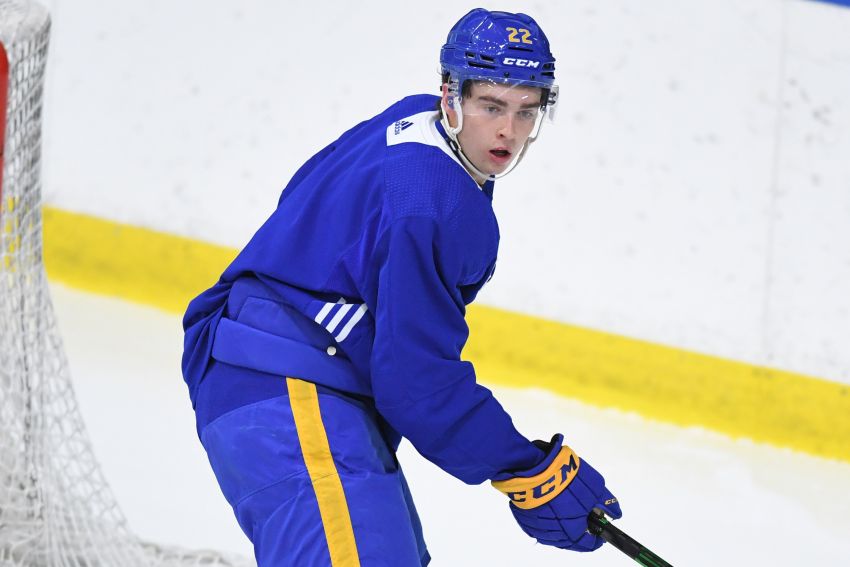 BUFFALO – Jack Quinn acclimated to center right away as a rookie, recording two assists in his debut. Had the Sabres prospect not undergone season-ending hernia surgery in April, he would’ve closed the AHL campaign pivoting a line.

“He … was very, very good at it,” Rochester Americans coach Seth Appert said of Quinn’s two-game stint at center.

So Quinn, the eighth overall pick last year as a right wing, will be playing center during the Prospects Challenge, which starts tonight against the New Jersey Devils at Harborcenter. Quinn and wingers Brett Murray and J-J Peterka offer the Sabres an intriguing No. 1 line for the rookie tournament.

Given the dearth of centers the Sabres have on their roster, the move, which could be temporary, might give Quinn, 19, a faster path to the NHL.

“If you can play any position, maybe you have a better chance,” Quinn said following Thursday’s practice. “But I’m not really thinking about it for that sense. I don’t think (the Sabres) are, either. I’m going to try to play center, and if I’m a better center than a winger, then that’s the best-case scenario.”

The 6-foot, 176-pound Quinn believes shifting from right wing will help him showcase his skills.

“I like playing the puck through the middle of the ice and dictating the play a little bit more, kind of be a little bit more competitive by being more involved in the D-zone,” Quinn said. “And I think just the fact that I can keep my speed up and down the ice instead of starts and stops along the wall might be a bit of an advantage.”

Long before the Sabres moved Quinn they believed he possessed the traits of a center. Sabres general manager Kevyn Adams said in April the data Quinn generated with the Ottawa 67’s in 2019-20 illustrated “he played as almost as if he was a center.”

“He’s a play-driver, and there’s not a ton of wingers that are play-drivers,” Appert said. “A lot of times wingers are guys that get out early on offense and can score or they have some defensive deficiencies to their game.”

Quinn’s ability to dissect the game also gives the Sabres confidence he can play a more demanding position.

After an early-season stint on the Sabres’ taxi squad in 2020-21, Quinn spent the rest of the year with the Amerks, registering two goals and nine points in 15 games. In a normal season, Quinn wouldn’t have been eligible to play in the AHL because he was a teenager. But the COVID-19 pandemic forced the Ontario Hockey League to cancel its season, so he was available to Rochester.

“By the end of the 15 games, I was a lot better player than I was at the start,” Quinn said. “For a few examples, learning how to play against bigger guys. I can’t use my size as much as I could against junior players the year before, so learning how to create offense without that kind of advantage could be one thing (I learned).”

Quinn said it took about two or three months before he fully recovered from the hernia surgery. He spent the summer focusing on two areas Appert challenged him to improve: his skating and shot.

He worked with Shelley Kettles, the Ottawa Senators’ skating coach, to enhance his positioning and edge work.

“I improved that part of my game a lot,” Quinn said. “I’m excited to see how that translates out there, if that makes things easier out there.”

While Quinn has a terrific shot, Appert wants him to develop a quicker release. To accomplish that, he shot pucks in his backyard.

“He’s put a ton of work in,” Appert said. “The beauty of Jack is he’s really coachable, so when you tell Jack Quinn to go attack an area of his game in practice last year he does. When you watch video with him, he’s listening and absorbing. He wants to get better.”