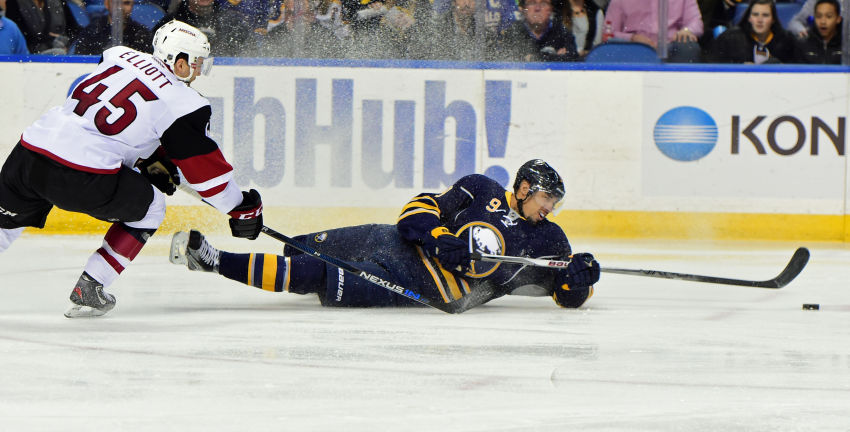 Scoring once in his first 11 appearances and missing 10 contests with an MCL injury certainly didn’t help.

But that disappointing start has recently become an afterthought, as Kane’s one of the NHL’s hottest scorers as the Sabres start a three-game Canadian road trip tonight against the Edmonton Oilers.

Kane, 24, scored twice Friday – a slick short-handed breakaway and an empty-netter – in the Sabres’ 5-2 win against Arizona. He was perhaps the best player throughout Tuesday’s 5-4 shootout loss in Detroit, scoring twice and pumping six shots on goal.

“I’m starting to feel like my old self again,” Kane, who has six points in his last three games, said Friday.

It has taken Kane almost a year to regain some normalcy. He underwent season-ending shoulder surgery in February. Then, in the midst of a slow start, he hurt his left knee Oct. 24.

These days, he looks like the first-line power forward the Sabres envisioned when they acquired him in a blockbuster deal with Winnipeg on Feb. 11.

“He’s probably our hardest worker, our guy who puts the most pressure on teams with how he skates and how he plays,” Sabres coach Dan Bylsma said. “I just think he’s getting opportunities now because of that pressure, because of the way he’s playing.”

Kane’s playing well, in part, because he has finally found some linemates. In four games together, Kane, center Ryan O’Reilly and Sam Reinhart have become the Sabres’ undisputed No. 1 line.

“I think we’re starting to find some offensive chemistry – me, Ryan and Reino,” Kane said. “We’re working well. I think we all kind of have different skill sets. I think we’re gelling quite nicely.

“For me, I got my legs right now. I’m feeling good about my game and about my line. It’s fun to play right now.”

Very quietly, winger Jamie McGinn has morphed into one of the Sabres’ top offensive threats, scoring two goals and five points in the last four games.

McGinn, who has played with just about every forward this season, has recently been skating with center Jack Eichel and captain Brian Gionta.

“I’m just trying to keep it simple, do the things that make me successful – be physical out there and kind of get the boys into it right away where I have to get myself into it by getting hits early,” McGinn said. “When I do that, the ice kind of opens up for me a bit. I’m fortunate they’re going in right now.”

The Sabres recalled forward Cal O’Reilly, the older brother of Ryan O’Reilly, from the Rochester Americans on Saturday. The team needed an extra forward for its road trip.

Sabres winger Matt Moulson, who has only four goals and 11 points in 26 games, on his struggles: “Sometimes it’s tough when you’re not playing as confident. … It makes things a lot easier when you’re playing with a lot of confidence. I guess I just have to keep working. That’s the only way I know to get yourself going.”

Moulson was benched by Bylsma for a bit Tuesday.

The Sabres practiced Saturday in Edmonton.