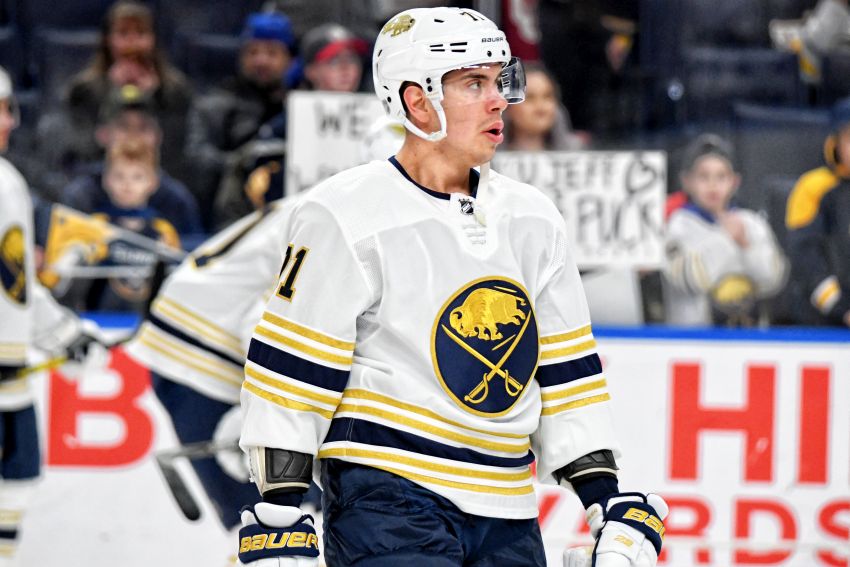 BUFFALO – After playing 10 straight games, Sabres forward Evan Rodrigues will likely be scratched this afternoon against the Pittsburgh Penguins.

Sabres winger Michael Frolik has recovered from a nasty bout with the flu and is set to return, meaning one forward must sit out.

Based on Friday’s practice lines, Rodrigues will be a healthy scratch for the first time since Jan. 28.

Rodrigues, 26, sat out regularly over the first two months, often serving as the Sabres’ 13th forward. For the past six weeks, however – shortly after he reportedly requested a trade – he has played regularly, only getting scratched twice.

“He has definitely stepped up within the game we want to see and the habits are becoming more natural to him,” Sabres coach Ralph Krueger said following Friday’s practice inside KeyBank Center.

Rodrigues has started producing a bit, scoring three goals in the last eight contests. Remember, he scored his first goal this season on Jan. 12, his 26th appearance.

The speedy Boston University product’s versatility has also helped buoy him. He can play every forward position and all over the lineup. He recently subbed for Victor Olofsson at left wing on the top line beside center Jack Eichel and Sam Reinhart.

Rodrigues has performed well in limited ice time. A team looking for depth up front could be interested in him before Monday’s trade deadline.

But these days, Rodrigues sounds happier. Does he see a future with the Sabres?

“It’s just harder to make plays when you don’t have the puck on your stick as much and you’re getting out there every five, 10 minutes,” said Rodrigues, whose ice time has dropped from 15 minutes, 49 seconds a game last season to 11:19 this year. “It’s hard to stay in a rhythm, stay confident. You believe in yourself that you have the ability, but when you don’t get the touches, it’s a little bit tougher to make those plays.”

During the preseason, Rodrigues talked about how he believed he had solidified his game and could play with anyone in the NHL.

Barely a week later, he began the season as a healthy scratch.

“It’s obviously not a good feeling,” Rodrigues said. “So, yeah, it was a little difficult. I thought I bounced back well.”

So what has changed since early January?

Krueger said Rodrigues has started adjusting to the Sabres’ new system and set of expectations.

“I believe I have the whole year,” Rodrigues said. “I think it’s just feeling more confident with the puck on my stick and making plays. I think that’s the biggest difference and just letting the game come to me.”

What about his scoring surge? He has scored five times in his last 14 outings.

“It started going in, I think,” said Rodrigues, who has compiled nine points in 38 games. “I don’t think I’ve done anything different or changed anything. They just started to find the back of the net. It’s a weird game. Things like that happen and they don’t go in for a while.

“Then you get one and they just start coming. It’s just the way it’s been. The puck’s starting to go in. That’s pretty much it.”

“At the moment, everybody’s available,” Krueger said after all three players practiced Friday.

Eichel and Okposo had maintenance days Thursday. Frolik, meanwhile, skated on his own Thursday after the flu sidelined him two games.

“Kind of finally back to normal, I guess,” Frolik said. “That really knocked me out. I don’t know what it is. I can’t remember when I missed that much time with the flu.”

Frolik said he was bedridden for a few days.

The Sabres sent winger Scott Wilson back to the Americans on Friday.