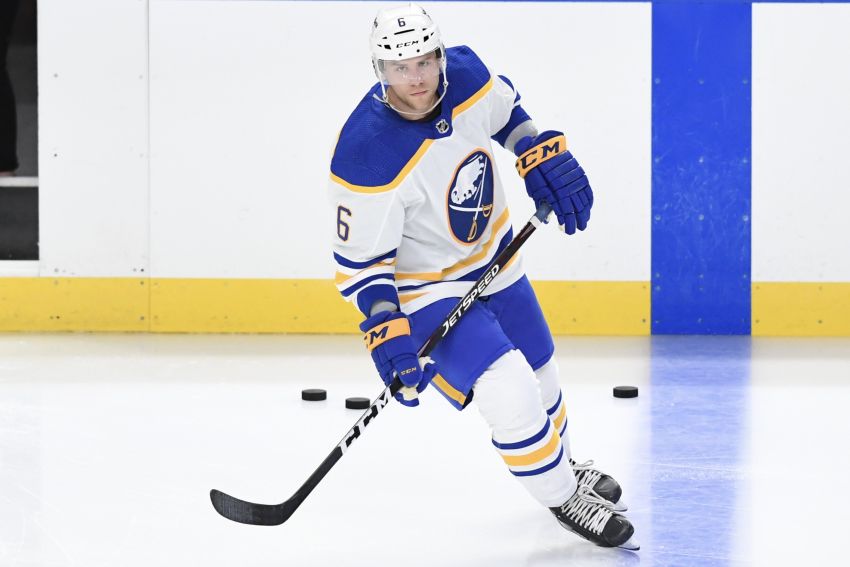 BUFFALO – Sabres defenseman Ethan Prow spent much of his 20s toiling in the AHL, posting gaudy numbers and never earning even a cup of coffee in the NHL.

In 2018-19, Prow morphed into one of the league’s elite offensive defensemen, registering 18 goals and 50 points. The next year, after changing organizations, he recorded nine goals and 32 points during a shortened campaign.

A call to the big leagues never materialized, and last season, Prow bolted to Germany, where he kept producing for Red Bull Munich.

But Prow, 29, said he possessed belief he would earn his chance in the NHL someday.

“That’s why I came back (from Germany), I guess, right?” said Prow, who scored a goal in his NHL debut Wednesday, a 4-3 loss to the New Jersey Devils at KeyBank Center. “So there’s always that thing in your mind that wants to play in the NHL and today that came true.”

“You never expect to get your first one and your first goal as well,” said Prow, who signed a one-year, two-way contract with the Sabres on July 29. “So that’s just the cherry on top.”

Having lost Colin Miller to an undisclosed injury Tuesday, the Sabres had just five healthy defensemen and needed reinforcements from the Rochester Americans.

Amerks coach Seth Appert said Prow was likely going to be recalled with defenseman Mattias Samuelsson. But Appert awakened to a text at 5:45 a.m. Wednesday saying Samuelsson had tested positive for COVID-19.

So now Prow would go alone to Buffalo to join the taxi squad. Appert said he called Prow about 7:30 a.m. and told him to get to Blue Cross Arena as quickly as he could and he would give him more details.

“Didn’t really know at the time if I’d be in or not, and I kind of got the luck to get in and get it done,” said Prow, who participated in the Sabres’ morning skate and was promoted to the active roster late in the afternoon.

At 6:30 p.m., Prow was sent out for the customary “solo lap” to begin warm-ups with winger JJ Peterka, who was also making his NHL debut Wednesday. Coincidentally, Prow and Peterka, 19, were also teammates in Munich last season.

Prow, who was partnered with Will Butcher, played 15 minutes, 59 seconds against New Jersey. He scored on his first NHL shot 14:38 into the third period, pinching in and burying winger Victor Olofsson’s rebound.

“He’s a really good player, and I think people saw that,” Appert said of Prow.

“Definitely a special moment and night that’s Prow’s going to never forget,” said Sabres assistant Matt Ellis, who’s filling in for head coach Don Granato while he’s in the NHL’s COVID-19 protocol. “But the culmination of the moment and how this transpired is pretty cool. Sometimes the best scenarios are the ones you don’t have any time to think about, where you’re running on just pure instinct and adrenaline and passion for the game.

“Sometimes that’s the best scenario when you don’t really have a chance to sit back and digest what’s going on, you’re thrown right into things and
you’re just totally on reaction.”

So why did it take so long for the 5-foot-11, 183-pound Prow, a right-handed shot, to play his first NHL game? Wednesday was his 284th pro appearance. He’s in his sixth pro season.

Appert said it can be easy to label Prow as a skilled AHL player. Prow’s a bit undersized for his position and doesn’t have dynamic feet.

“He’s not a poor skater,” Appert said. “He’s not an elite-skating defenseman for a guy that’s 5-11ish. So that’s always scary to people. If you’re under 6-foot or 6-1 and you’re not as mobile as they’d like you to be, it’s easy to not give those guys a chance.

“But intelligence and competitiveness wins out more than skating ability usually does, as long as the skating’s good enough, and his is.”

Appert said Prow has been a “warrior” for the Amerks.

“I mean, this guy goes to war for his teammates every night, blocks shots, one of our best defenders, plays against the other team’s best line, penalty kills,” he said. “So I think there’s a misconception on what he is as a player.”

Ellis on the potential of anyone leaving protocol Friday: “That’s something that’s been discussed. I know our medical team has looked at that, as has Kevyn. They haven’t brought me up to speed, but I know with the changes in protocol there’s certainly a chance.”

The isolation period was recently reduced from 10 to five days for fully vaccinated players who meet certain conditions. Granato and six players are in protocol.