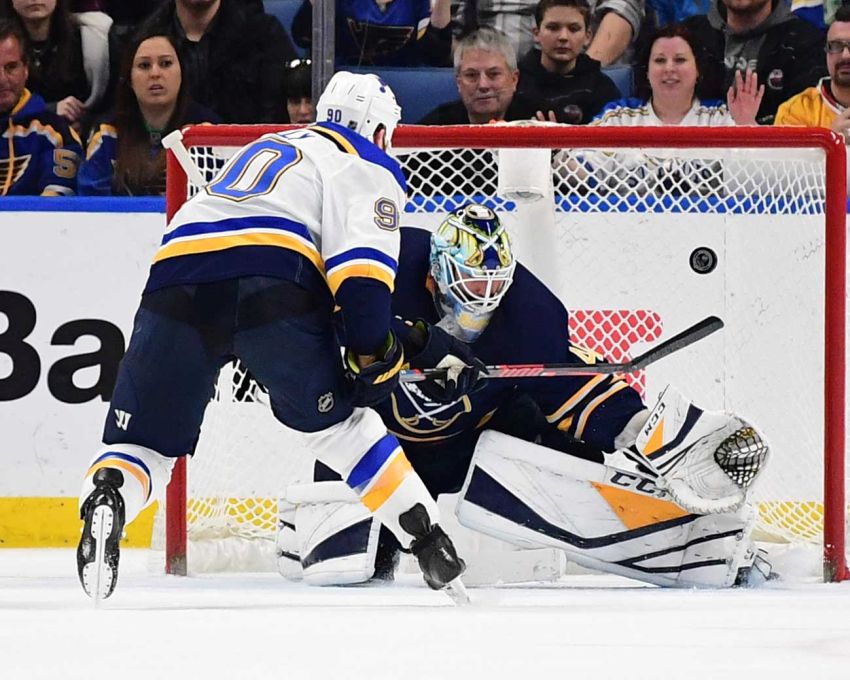 BUFFALO – Sabres winger Kyle Okposo heard the crowd roaring and wanted in on the action.

For a 27-second stretch late in the third period of Sunday afternoon’s entertaining 4-3 shootout win, the Sabres started thumping every opponent in sight.

The normally docile fans inside KeyBank Center grew louder and louder with each hit.

So Okposo wasn’t about to pass up an opportunity to hit St. Louis Blues defenseman Jay Bouwmeester.

“I just heard everybody cheering when guys hit each other, so I dumped it in and finished my check in the corner,” a smiling Okposo said after the Sabres ended their seven-game losing streak before the crowd of 18,486. “They just kept cheering.”

For the first time since November, the building became electric.

Every Sabre on the ice – Okposo, forwards Zemgus Girgensons and Johan Larsson and defensemen Casey Nelson and Marco Scandella – registered a hit.

Okposo said he skated to the bench laughing.

“It was just funny,” Okposo said. “They weren’t big hits, but the crowd was into it. So it was great, it was great to see fans into it, have a few adult beverages on St. Patty’s Day. I’m sure everybody’s feeling nice.”

For one of the few times in recent months, the Sabres played a complete home game, never flinching after the Blues erased a two-goal lead.

“It got physical,” Sabres coach Phil Housley said. “It all started with Larsson’s line, they came out and delivered some hits. Our guys didn’t back off.”

Okposo said: “It was fun just to be a part of that and have some energy at home and get a win for the fans. It was a big shift.”

The victory, the Sabres’ first since March 1, lifted a massive weight off their shoulders. Things had become so bad – they got shut out in three straight contests before Saturday’s 4-2 loss to the Carolina Hurricanes – it felt like changes could be coming.

The Sabres received contributions up and down the lineup before winger Sam Reinhart’s shootout-clinching goal.

Rodrigues and Sheary both scored. Nylander, who could be playing for his future with the Sabres following his recall last week, assisted on both goals.

“They’re finding a way to find some offense and some secondary scoring for us,” Housley said of the trio.

Nylander, the eighth overall pick in 2016, has looked more and more comfortable over his four games. He finally got rewarded with his first points Sunday.

“He’s gotten his step now,” Housley said. “He’s moving with the puck and he makes plays. (He made a) really nice pass to Sheary there. He just seems to get more confidence as the games go on here.”

Rodrigues said: “I’m trying to talk to (Nylander) a lot. … When you can let him know that he has time or when he has to make a quick play, it’s definitely going to help out his game. I think he’s starting to show off his skill.”

Sabres goalie Carter Hutton, meanwhile, made 30 saves against his old team, including six in overtime.

“That’s the beauty of the three-on-three (overtime), I think it’s a lot of fun for everyone involved,” Hutton said. “Sometimes the goalie, it’s feast or famine, but you just try to battle and just have fun with it.”

“I try to treat every game like wins are wins and try to stay focused,” Hutton said. “But obviously it’s rewarding going against a team you played for.”

Reinhart’s shootout winner was his third this season, tying him for the most in the NHL with Ryan Johansen and Kevin Shattenkirk. Reinhart is one shy of the Sabres’ single-season record Ales Kotalik set in 2006-07.

Sabres captain Jack Eichel scored the Sabres’ other shootout goal and has converted four of eight tries this season.

Patrick Maroon, David Perron and Brayden Schenn, who tied the game 8:41 into the third period, scored for the Blues.