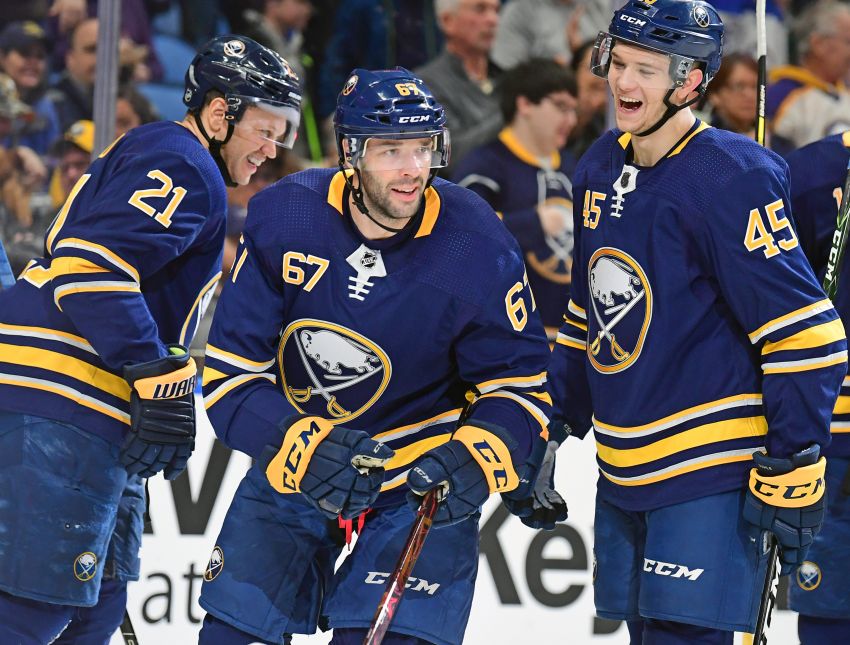 BUFFALO – Six days ago, the Sabres began their bye week on a rare high note, earning only their 11th win in 44 tries by beating the Columbus Blue Jackets 3-1.

The Sabres, of course, fell out of the playoff race a long time ago. Still, the confidence the rare victory generated carried through the break.

When the Sabres convened for practice this morning, coach Phil Housley noticed his team’s jump.

“It was great that we won that game before the break because you could see the energy in our practice, really good life out there,” Housley said inside KeyBank Center. “I think guys are feeling good about themselves.”

The Sabres have one two-game winning streak this season. That’s not a typo. They won consecutive games on Oct. 21 and 24. That’s it.

They have another chance in Thursday’s road tilt against the New York Rangers.

Finding motivation when you’re buried in last place can be difficult. But for Housley, a rookie coach, the Sabres’ schedule presents an opportunity.

“We’re playing a lot of teams down the stretch that are in the playoffs or in playoff contention,” Housley said. “That’s our challenge, see how we measure day in and day out against really good teams. Columbus was a good example.”

“You come to work and you want to be at your best, you want to prove to yourself and prove to everybody that you still have it, you’re a good player,” he said. “I think that we all should take that into consideration.”

The flu sidelined Beaulieu five games last month. The Sabres summoned Nelson once earlier this season but didn’t dress him.

Why didn’t the Sabres recall top defense prospect Brendan Guhle? The slick youngster, who looked impressive in two outings before the break, suffered a lower-body injury in Tuesday’s practice and is day-to-day, Housley said.

“We want him back healthy if he does come up,” Housley said. “We don’t want to put any pressure on him and put him in a position not to succeed. I really liked what he brought the last two games for us, especially the Columbus game. A lot of times it was him and Jake (McCabe) up in the rush, and I’m all for that kind of hockey.”

The Sabres also have defenseman Victor Antipin, who missed 10 games battling the flu, available. The Russian said he lost 10 pounds but has put the weight back on.