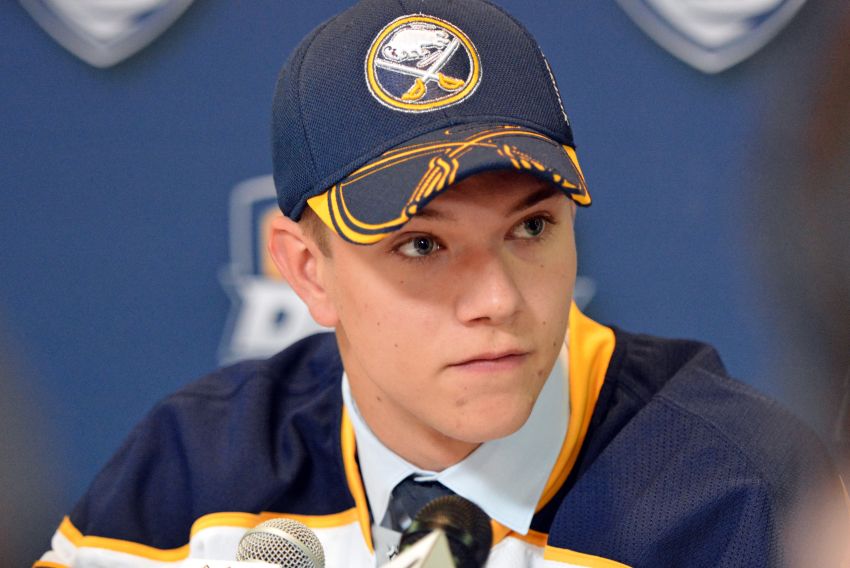 SUNRISE, Fla. – Brendan Guhle left the NHL Scouting Combine earlier this month in Buffalo feeling good about his future. The defenseman had some impressive pre-draft workouts and felt he interviewed well with the Sabres. He also enjoyed seeing sights around the city during his brief stay.

The 6-foot-1, 184-pound Guhle left Buffalo feeling good about his chances of returning.

Lucky for him, he’ll be visiting again real soon. The Sabres selected the 17-year-old in the second round, 51st overall, with their first pick Saturday.

“I’m really excited,” Guhle said inside the BB&T Center. “I love the city.”

What kind of prospect is Guhle?

The Sabres’ info on Guhle was so strong they wished he would’ve skipped the combine testing so other teams couldn’t see him, Murray said.

Guhle plays a physical style – he can give and take hits – but Murray said he needs work on his defensive game. The youngster doesn’t have to look far for help. He’s from the same hometown in Alberta – Sherwood Park – as Sabres prospect Mark Pysyk. The two recently spent some time on the ice together.

“We don’t have a lot of depth there, but it certainly wasn’t designed,” Murray said about the defensemen.

Here are the Sabres’ other selections:

The Sabres didn’t select a goalie – no third-round picks played a role in that, Murray said – for the first time in five years. They’ll likely add a young goalie in the next two days, said Greg Royce, the Sabres’ director of amateur scouting.

“We had hoped to get a goalie,” Royce said. “We were talking about different goalies. They start coming off the board, then there were a few goalies there. I think we can do a little homework in the next few days and get a young goalie into camp that didn’t get drafted that will be equal or better than the guys that were drafted.”

On Friday, the Sabres acquired goalie Robin Lehner, a 23-year-old they expect to start next season. Murray said the Sabres also discussed their other young goalies – Notre Dame’s Cal Petersen and Europeans Jonas Johansson and Linus Ullmark – and want to give them time to grow and separate themselves.