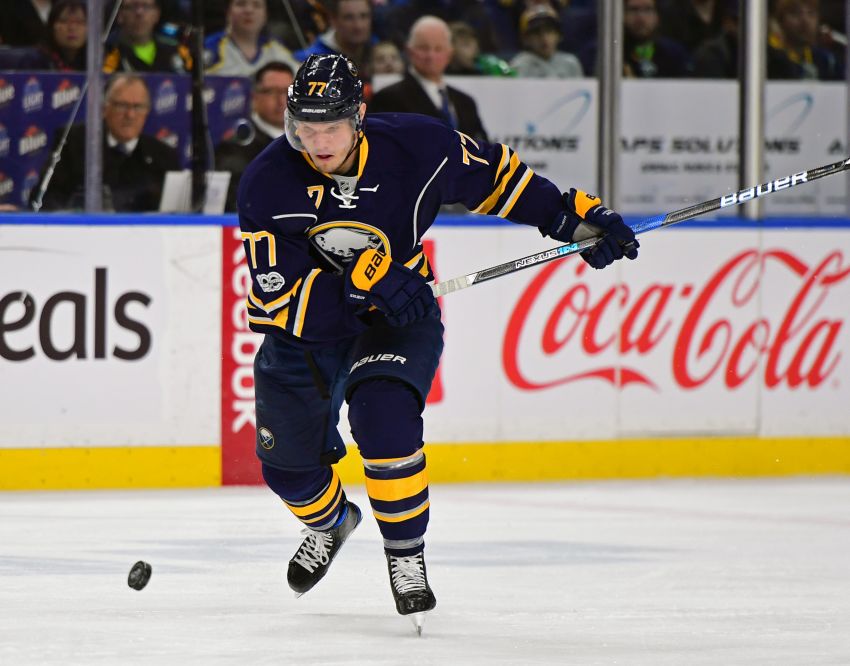 BUFFALO – In his first and probably only season here, defenseman Dmitry Kulikov has performed so poorly – the Russian has one goal, two points and a wretched minus-17 rating – the Sabres couldn’t even get a late-round pick for him before Wednesday’s trade deadline.

So the Sabres have Kulikov for 18 more games. Of course, that doesn’t mean coach Dan Bylsma will play him.

“I had a discussion with him today post-deadline,” Bylsma said prior to Thursday’s 6-3 win against the Arizona Coyotes inside KeyBank Center. “He’s a guy that needs to play better. … He potentially, yes, could come out of the lineup if he doesn’t find his game here in the last (18) games.”

Kulikov has battled a lower-back bruise since getting knocked into an open bench door in his preseason debut, an injury that has limited him to 38 games. The first half of the season, he said, “there was always something bugging me with that injury.”

Kulikov figured to draw interest before the deadline because he compiled a strong body of work over his first seven seasons. Not even a year ago, he was a stud during Florida’s opening-round playoff series.

In other news, thanks to no deadline activity, there were some relieved players in the dressing room Thursday morning.

“Yesterday was a little bit of a stressful day, there’s no way around that,” Sabres defenseman Cody Franson said. “I’m very happy with the turnout. I enjoy it here. I like it here. I’d like to remain here. When I didn’t get the call, I was happy.”

Sabres captain Brian Gionta probably slept well, too. Gionta, who could only be dealt to five teams, said Murray called him Wednesday.

Gionta, 38, was adamant before the deadline he wanted to stay. He understands what Murray did will be noticed around the league.

“That’s what we’re trying to build here is a place that people want to come to, a place that’s on the rise and has that stability,” Gionta said.