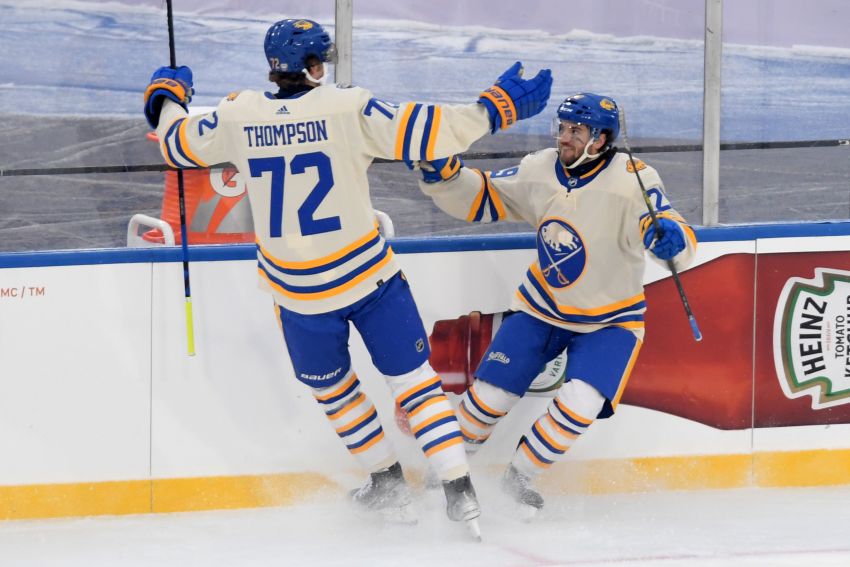 HAMILTON, Ont. – If the Buffalo Sabres crack the postseason in the near future, the last four days, punctuated by Sunday afternoon’s 5-2 victory in the Heritage Classic, will be remembered as a significant stretch in their maturation.

Before a capacity, pro-Toronto crowd of 26,119 fans outdoors at chilly Tim Hortons Field, the Sabres scored three third-period goals to down the playoff-bound Maple Leafs.

It was a game, just like Thursday’s 3-1 win over ex-captain Jack Eichel and the Vegas Golden Knights, the Sabres almost certainly would’ve lost earlier this season.

For the first time in more than a decade, the Sabres enjoyed some time in the spotlight, soaking it up and thriving under the pressure.

On an international stage – Sunday’s contest was nationally broadcast in the United States and Canada – the rebuilding Sabres rallied from two second-period deficits and embarrassed their fiercest rival for the second time this month.

“It’s big, because it’s big moments in front of a crowd like this, in Canada,” coach Don Granato said of the Sabres’ first-ever outdoor win. “What an amazing event, this is a spectacular event. … So to be able to do it in in this environment, perform under pressure, yes, it does give you confidence moving forward.

“We’ve had a lot of games we felt we deserve better and maybe deserve wins, and didn’t come. And you have to just keep pushing forward. So this one, the last couple of days have been a good indicator, just keep doing it, just keep doing what you’re doing and things will turn for you.”

Maybe after years of futility, things are finally turning for the Sabres. Thursday, in their most intense outing this season, they blew a late lead before roaring back for an emotional win.

“There’s no question it’s a turning point in the form of confidence,” Granato said of the last two wins.

Goalie Craig Anderson said the Sabres need to keep reminding themselves “to stay in the moment.”

“You get too far ahead of yourself, you start worrying about the play you just had, whether it was good or bad, nothing good can come from that,” he said. “We’re starting to learn that and we’re starting to grow in those areas.”

The Sabres have lost 14 games this season in which they were leading or tied after two periods. Now, they’re finding ways to win.

“We’re really proud of what we have here, from the standpoint of we know we have skill here, it’s a lot of young skill and a good mix of some older really good leaders,” Granato said. “But we really know we have good people and competitive people. When you watch our group compete the way they’ve competed the last couple of games and get the reward for the work, it’s nice on the coaching side, I can tell you for the organization and (general manager Kevyn Adams) and for all we talk about.”

Krebs and Hinostroza became the talk of Sunday’s game. After a scoreless first period as snow fell, Toronto’s Ondrej Kase opened the scoring 40 seconds into the second. But Krebs tied it at 1:22, converting a nifty pass from Hinostroza past goalie Petr Mrazek.

Following Auston Matthews’ goal at 2:57, Hinostroza’s pass defected off Toronto’s TJ Brodie and in at 10:53.

In the third period, Hinostroza scored from the goal line at 5:16, a shot the maligned Mrazek likely wants back. Then Krebs put the Sabres up 4-2 at 13:49, beating Mrazek as the net came off the moorings.

“You don’t get to be in these things very often,” Krebs said of playing an outdoor game. “I just tried to do that every shift, have a smile on my face, ya know, and if the puck’s bouncing, just kind of shake it off. Everyone’s battling the elements. I just tried to do my best with my linemates and my teammates, have fun and, yeah, it was a great experience. Probably the most fun I’ve had playing hockey. It was awesome.”

The memories of the weekend – after Saturday’s practice, there was a family skate – will be seared in the players’ minds forever.

“There were so many distractions this weekend, we had family over the hotel enjoying themselves,” Hinostroza said. “But our team did a good job of kind of putting that in the background and coming in realizing we have a big game to win here, and I’m really proud of our team.”