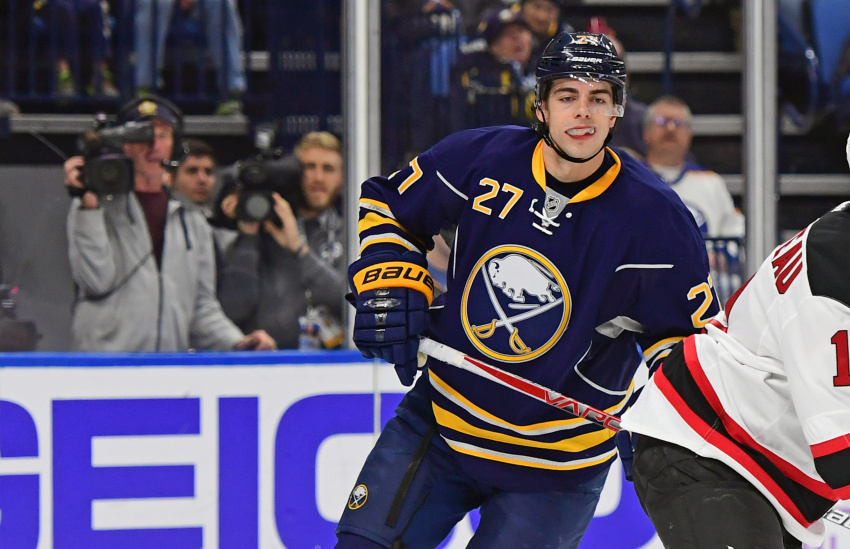 After all, Grant, 26, was the Sabres’ best player throughout training camp, helping him vault from a depth player likely ticketed for the AHL into regular NHL duty.

“He adds more to our team than scoring goals,” coach Dan Bylsma said Friday prior to the Sabres’ 2-1 overtime loss to the New Jersey Devils inside KeyBank Center. “That’s where his focus has got to be.”

The 6-foot-3, 212-pound Grant has focused on adapting his talents to the NHL. The Michigan State product is a lethal AHL scorer, having compiled 27 goals and 45 points in only 36 games last season with the Stockton Heat, the Calgary Flames’ affiliate.

But Grant’s scoring prowess hasn’t translated to the NHL. He has zero goals and four assists in 54 big league appearances.

“It’s different,” Grant said. “The minutes played, the times between shifts – it’s an adjustment. … Whether I’m down there or I’m up, my focus for me is being a strong two-way centerman, and obviously from there it starts in the faceoff circle.”

Grant has made perhaps his biggest impact in the faceoff circle, winning 78 of 151 of his draws (52 percent) entering Friday’s tilt. In Wednesday’s 2-1 shootout loss to the Ottawa Senators, Grant won 14 of 20 faceoffs. As the game progressed, Bylsma put him on the ice with other lines to win draws. He also earned time killing penalties thanks to his faceoff skills.

“It’s something I’ve worked a lot at for the past four or five seasons,” Grant said of faceoffs. “It’s been a big focus of mine. It’s a big part of the game.”

As a youngster, Grant said some veterans, including former Sabres center Zeno Konopka, taught him the art of taking draws. These days, he tries to pick up whatever he can to get an edge.

“It’s probably a lot more mind games than people think, too, when you’re taking it against the same guy over and over,” Grant said. “Whether he’s beating you or you’re beating him … (you have to) try to get in each other’s heads a little bit. It’s something you got to work at if you want to stay consistent.”

While Grant contributes in other ways, his low offensive output still bothers him. He recorded his first point Wednesday.

“Something I try not to think about too much,” he said. “Obviously, it’s in the back of your mind a little bit. I think I know I can score goals. I was able to do it quite a bit last year.”

Grant scored at a 57-goal, 95-point pace in the AHL last season.

“Being a guy who scored (28) goals in the American Hockey League last year as a go-to guy, a net-front guy, power-play guy … it’s a maybe more of a mental adjustment getting in the back of the net,” Bylsma said. “We’ve talked about it a little bit. He’s gone a lot of games without a goal in the National Hockey League. That could be a tough thing mentally for him.”

Down one day, up the next. Repeat for six months. For the last three seasons, Sabres newcomer Justin Falk has served as a depth defenseman for three organizations, constantly shuttling between the NHL and AHL.

“Over the last two or three years I’ve hopped back and forth quite a bit,” Falk, 28, said after the Sabres recalled him Friday morning. “Just another day for me to go about my business. It’s just a different league, a higher-up league.”

With defenseman Dmitry Kulikov out Friday (undisclosed injury), the Sabres summoned Falk, a veteran of 172 NHL games, from the Rochester Americans. Kulikov is questionable for tonight’s game in New Jersey.

“I just want to be solid and steady,” he said. “There’s nothing fancy about my game. I’m hard to play against. I play hard in front of our net and hope that the puck goes quick to our forwards in transition. I just try to bring reliability on the back end.”

Meanwhile, Eichel, sidelined by a high left ankle sprain since Oct. 12, skated Friday without equipment for the second straight day, upping his minutes from 25 to 45, Bylsma said.