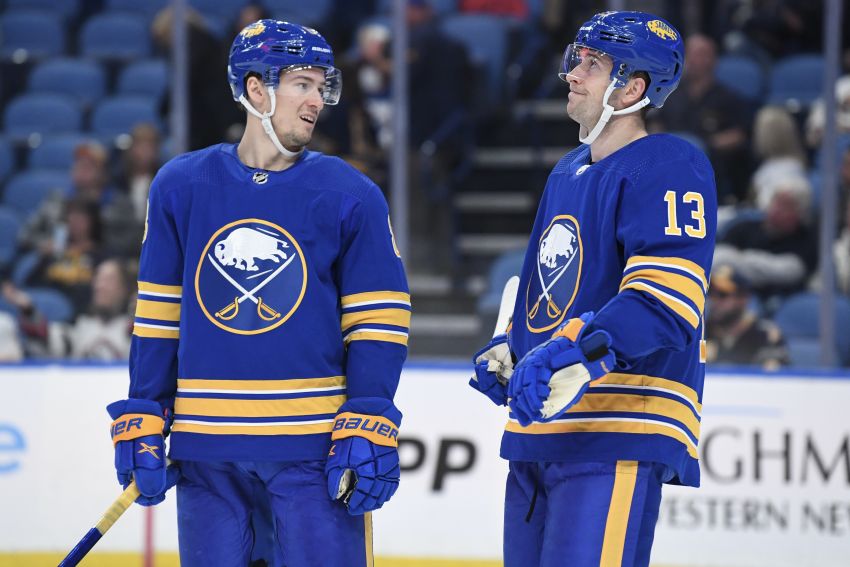 “We try to move the puck up north as quick as we can and try to close plays in the D-zone as quick as we can,” Hagg said following Wednesday’s practice at KeyBank Center. “I think that’s why we’ve been successful so far.”

That style, of course, can be a tad boring. Still, it has been effective for the duo entering tonight’s contest against the Anaheim Ducks, the start of a four-game road trip.

Hagg and Pysyk, both of whom always seem to be smiling, have played all six games together this season. They’ve quickly developed a friendship off the ice and chemistry on it, learning each others’ tendencies.

“They … see the game with a lot of experience in different situations and they play well together,” Sabres coach Don Granato said. “I mean, every situation that they’re in, they’re in it as a pair.”

Pysyk said “being predictable with one another” helps generate their success.

“In practice, we’re pushing each other and having fun,” he said. “There’s that level of comfort where if one of us makes a mistake, you’re not letting the other guy down. We’re building each other up.”

Hagg said Pysyk is “underrated” and always seems to be in the right spot.

“If there’s a foot or a stick that needs to be there, his stick is there or his foot is there or his body is there,” he said. “I’m really happy to play with him because it makes my game much easier because I know if I screw up, I know I have his position behind me and he will help me to clean it up.”

In Monday’s 5-1 win, Hagg and Pysyk enjoyed their best outing together, holding Tampa Bay Lightning superstar Steven Stamkos and his linemates to just four shot attempts, according to NaturalStatTrick.com.

With the game tied at 1 late in the second period, Pysyk made a critical play, nullifying Stamkos’ breakaway by lifting his stick.

“It was elite,” Hagg said of Pysyk’s tenacious backcheck.

Despite their defensive tendencies, Hagg and Pysyk occasionally showcase their offensive skills.

While neither play was spectacular, both helped the Sabres improve to 4-1-1 this season.

Hagg, 26, and Pysyk, 29, sound energized by their new opportunities. So far, they’ve each averaged more than 18 minutes of ice time a game. Two weeks into the season, they’ve also had stability as a tandem.

“We must be doing something great because we haven’t switched it up,” said Hagg, who was acquired in a trade with the Philadelphia Flyers on July 23. “So, of course, it helps, you play with the same guy, you get to know him a little bit better, what his moving pattern is.”

Hagg was so excited about his fresh start he moved to Buffalo in early August. None of his other teammates had arrived yet.

“I was happy,” he said. “I came early and I got to see the beauty of Buffalo, too, during the summers. It was actually really fun.”

Hagg and Pysyk are two of several players the Sabres have on expiring or one-year contracts looking to reestablish themselves. Hagg endured a rough season in 2020-21, becoming a healthy scratch.

Pysyk, meanwhile, sometimes skated as a winger over the last two seasons. An opportunity to play defense regularly again helped him return to Buffalo, where he started his career in 2012-13, as a free agent.

In his first weeks coaching him, Granato has learned how the affable Pysyk maintains a balance, never getting too high or low.

“He reacts but he never overreacts and that’s what I like about him,” Granato said. “He reacts how you should react. Doesn’t overreact and obviously doesn’t underreact and brush things off. He’s businesslike but also there’s personality there, there’s a smile on his face.”

One thought on “Sabres defensemen Robert Hagg, Mark Pysyk thriving together as partners”