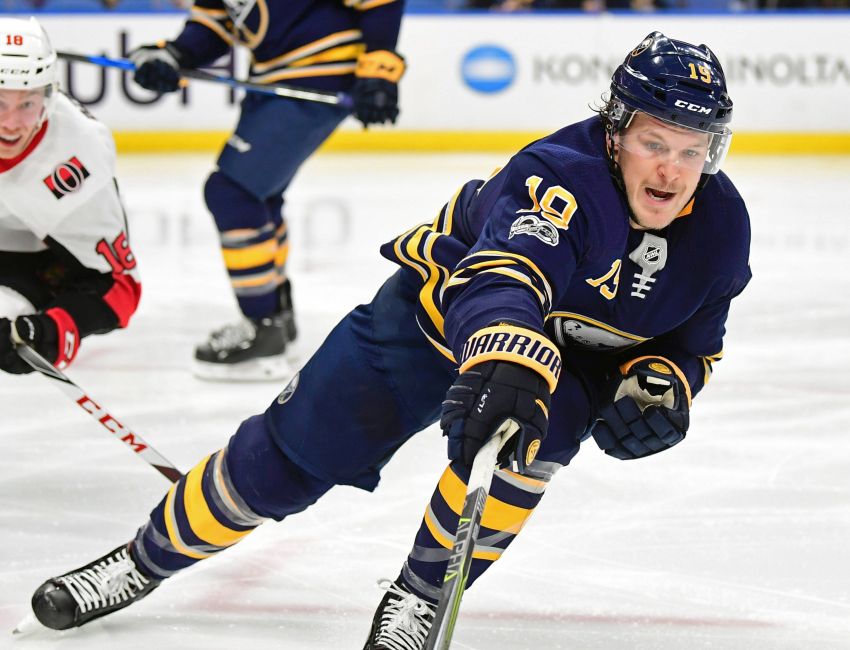 BUFFALO – Zero goals scored by a defense corps over a two-month stretch would be surprising for any NHL team, but one coached by Phil Housley, how could that happen?

Housley, of course, is a Hall of Famer who scored 338 goals, the fourth-highest total among defensemen in NHL history. The Sabres coach once scored 31 times in a season.

But Housley’s defense has produced just two goals this season entering tonight’s tilt against the Boston Bruins inside KeyBank Center. Jake McCabe has both scores, the first coming Dec. 5 in Colorado, the Sabres’ 28th game.

“It’s internally, it’s us,” Sabres defenseman Nathan Beaulieu said of the meager production. “It’s nothing Phil can do, we’re the guys out there. … The only way is to find positives out of situations like this. I think that we’re heading in the right direction.”

With little secondary scoring, the Sabres have averaged just 2.2 goals a game through 33 outings, the league’s lowest total.

“Our team success is going to be based upon our secondary scoring and our big guys stepping up for us,” McCabe said. “We’re part of that secondary scoring, we have to maybe contribute some more.”

Housley, whose defensemen have struggled to showcase the aggressive style he wants, acknowledged Monday the lack of offense from his blue line has surprised him.

“I think it’s coming,” he said. “A lot of the times we’re getting our shots through and we’re unfortunate. You look around the league, guys shooting pucks from the point and it’s hitting shin pads or finding its way through. We just got to continue to do that.”

McCabe said: “Just getting pucks to the net and bodies to the net, that’s really what it comes down to. It’s not that we haven’t had our looks this year, we just haven’t had necessarily good puck luck.”

True, Housley’s defensemen haven’t received many breaks or bounces. Still, the offensive struggles should mostly be traced to underperforming players.

For example, defenseman Rasmus Ristolainen, who has nine assists in 24 appearances, has averaged eight goals over the last three seasons. The Finn scored a hat trick in a 14-minute span two seasons ago.

Beaulieu scored four goals and a career-best 28 points last season in Montreal, yet has compiled three assists in 21 contests with his new team.

“I’m not going to panic here,” Beaulieu said. “I had (28) points in this league for a reason last year. I’m a producer.”

Defenseman Zach Bogosian has seasons of 10 goals and 30 points on his resume but hasn’t recorded a point in eight contests this year.

Injuries have also stymied the defense’s production. Bogosian (25 games), Ristolainen (nine) and Beaulieu (12) have all missed time, forcing Housley to rely on depth players at times.

Right now, other than Taylor Fedun (foot), the entire defense is healthy.

“Now that we’ve got the band back together, I think we’re going to start trending in the right direction,” Beaulieu said.

McCabe kept trending in Friday’s 5-4 overtime loss to Carolina, scoring his second goal (coincidentally, both have been reviewed) and adding two assists.

“Jake is getting his shot off a lot quicker, he’s jumping up in the play, reading the play real nice and using his mobility to get up,” Housley said. “He has a shot mentality now. … He’s just doing things quicker.”

Slowly, Beaulieu said, the defensemen are getting “more involved offensively.”

“But it’s a process, it takes a couple games to get that feeling back in,” he said. “Me being out a couple weeks (sick), I feel like the first game in my feet were moving. I feel like offensive chances are going to happen, you can’t push it. It’s the kind of thing that’s got to come to you, you don’t want to force it, because that’s when you get in trouble.”