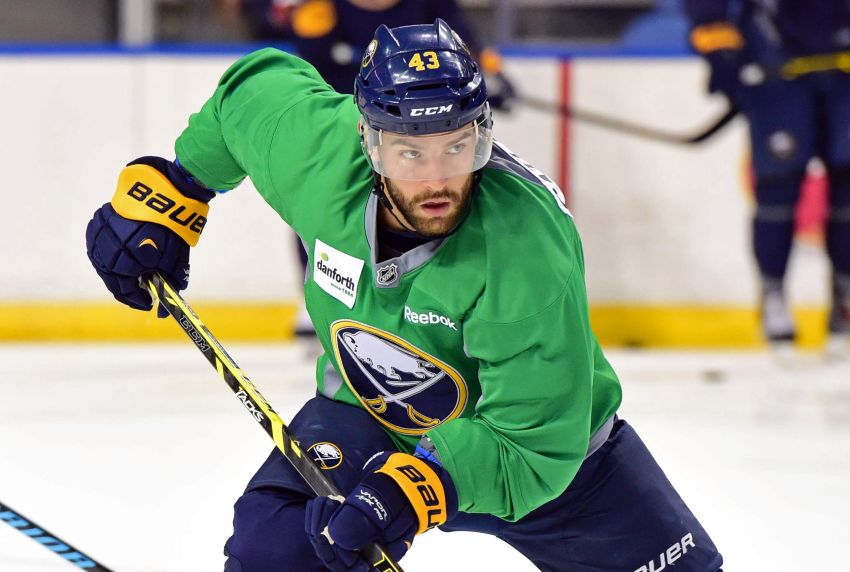 BUFFALO – In his first three AHL seasons, Sabres winger Dan Catenacci has developed what he believes is a strong relationship with his coaches. So the youngster was shocked when Randy Cunneyworth summoned him to his office Friday and the entire Rochester Americans’ staff began berating him.

What was the beef? Something Catenacci called a “nothing play” in the previous game.

“They started yelling at me,” he said Monday following practice inside the First Niagara Center.

An “angry” Cunneyworth eventually ordered Catenacci to “get out of my office.”

“I turned away and he just smirked,” Catenacci said. “He said, ‘You’re going up.’ It was probably the best news I’ve ever had in my life. It was very nice.”

What a way for Catenacci, the 77th pick in 2011, to find out he had earned his first NHL recall after 182 AHL appearances.

“The guys were all laughing, hugging me after,” Catenacci said. “They’ve never yelled at me like that before, so I knew something was up.”

For now, Catenacci, 22, is still up with the Sabres. He made his debut Saturday, skating seven minutes, 42 seconds on the fourth line in a 2-1 overtime road loss to the Boston Bruins.

Sabres winger Marcus Foligno practiced Monday and could return from his lower-body injury tonight against the Florida Panthers inside the First Niagara Center, meaning Catenacci might be scratched. But winger Zemgus Girgensons couldn’t practice and is also questionable with a lower-body injury.

If Catenacci plays, it will give his parents another chance to see him in an NHL game. His father, Maurice, and mother, Nancy, couldn’t get from their home outside of Toronto to snowy Boston.

“My mom called me crying before the game,” Catenacci said. “They couldn’t get a flight out of Toronto that wasn’t delayed. She cried about it, and I promised her I’d get another game for her to come and see. Hopefully, I get that opportunity.”

Why did the 5-foot-9, 191-pound Catenacci, who has seven goals and 15 points in 36 AHL contests this season, receive his first big league opportunity?

“(He’s) really using his speed, playing a straightforward game, being a forechecking pest, being on pucks,” Sabres coach Dan Bylsma said. “That’s really what’s been the strength of his game this year.”

After some early butterflies, an emotional Catenacci settled down and showcased some of those talents Saturday. Bylsma said he felt he was going to score. At one point, Catenacci battled Zdeno Chara, who’s almost a foot taller, and won a puck battle by “taking a chunk out of” the hulking defenseman, Bylsma said.

“You don’t want to screw up,” Catenacci said. “But I think as the game went on I gained a lot of confidence and feel a lot better around the guys now.”

Catenacci’s journey reminds Bylsma of the one he took 20 years ago. Bylsma played four minor league seasons, including 85 games in the ECHL, before the Los Angeles Kings rewarded him with a four-game look in 1995-96.

“It’s been a long time for him in the game and (he) paid some dues and had some lumps,” Bylsma said. “I think he’s worked through his game to another level and had to do it through his years (as a) pro. It’s a big payoff for him to get his first game.

“Yes, I see some of the same look on his face and appreciation of finally getting here and finally playing a game that I remember a long time ago.”

Catenacci has been overshadowed by other forward prospects for years. These days, rookie AHL wingers Justin Bailey, who could be on the Sabres’ radar next thanks to four goals and six points in the last three games, and Nick Baptiste garner most of the attention.

Quietly, Catenacci has improved his game. He scored 12 of his 15 goals in the final 38 contests last season and had two goals and seven points in the seven games prior to his recall.

“Last year I thought I had a great second half and a good year,” he said. “I wanted to build on that. I knew maybe there wasn’t a good chance of making it at first. Obviously, I knew if I kept working hard I’d get my shot.”

Forwards Cal O’Reilly, Tim Schaller and Phil Varone all got a shot this season before Catenacci.

Foligno said a deep-tissue bruise kept him from playing Saturday.

“Right now, it’s just a pain tolerance,” he said. “That’s all I can really say. Nothing really major, but it was just a tweak.”