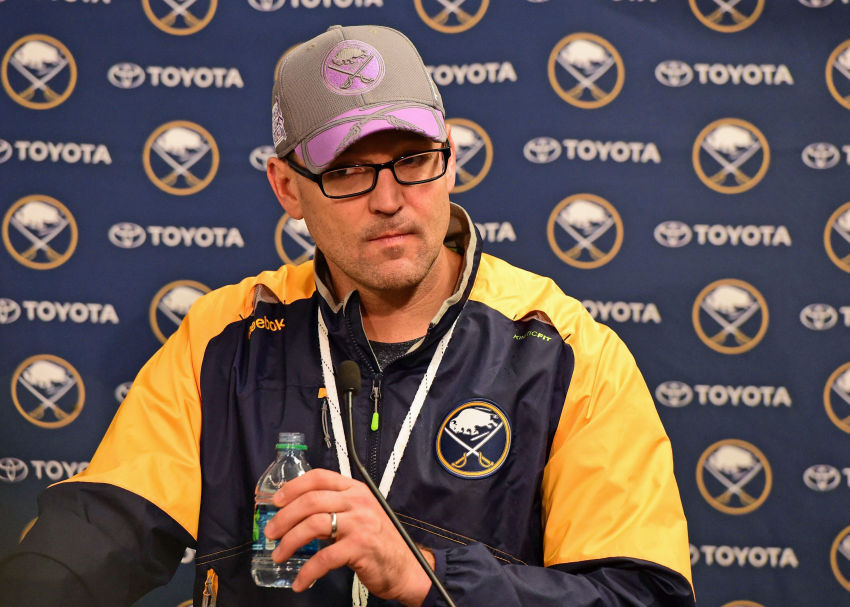 Dan Bylsma took over the Sabres on May 28. ©2015, Dan Hickling, Olean Times Herald

PITTSBURGH – There are no hard feelings, Buffalo Sabres coach Dan Bylsma said. For five and a half seasons, he enjoyed a heck of a ride leading the Penguins, winning a Stanley Cup just months after taking over the job in 2009.

That they let him twist in the wind at the end of another disappointing season, refusing to fire him for three weeks after letting general manager Ray Shero go, doesn’t matter.

“I don’t think there needs to be any reconciliation,” Bylsma said Wednesday inside the Consol Energy Center. “I got the opportunity to coach a great team, great group of players and a great organization.”

Of course, tonight’s contest, Bylsma’s first here since the Penguins fired him in June 2014, will be emotional. Lots of old friends greeted Bylsma with handshakes Wednesday.

“There’s a lot of familiarity walking into this building,” Bylsma said. “I certainly felt that today.”

From a hallway outside the dressing room, Bylsma looked out into the empty seats as he spoke to the media.

“I know 50 faces in the stands tomorrow, where they sit, and I know where my family sat when they were here,” he said. “There’s certainly going to be some emotions.”

“Coming in last night, it felt different than probably the previous 400 days I’ve been in Pittsburgh,” he said.

Bylsma went an incredible 252-117-32 as Pittsburgh’s coach, winning at least 47 games in every full season. Did the Penguins make a mistake letting Bylsma go?

Sure, they suffered a string of playoff disappointments after winning the Cup, only reaching one Eastern Conference final and losing twice in the first round. But some of those losses can be chalked up to injuries – superstars Sidney Crosby and Evgeni Malkin both missed the 2011 postseason – and wonky goaltending from Marc-Andre Fleury.

“I hate to say, we came close,” Bylsma said. “We put ourselves in position to … win series and move on and we didn’t.”

He added: “We didn’t do it, and that’s my only lament about the situation. I think we should have.”

After the New York Rangers’ seven-game win over the Penguins in the 2014 Eastern Conference semifinal, Bylsma knew he was finished in Pittsburgh.

“We needed to win a Stanley Cup,” he said.

The Penguins fired Shero May 16 but waited until June 6 to dismiss Bylsma.

Naturally, that created some odd situations.

“I think the most uncomfortable thing is the group of texts I got on the day I didn’t get let go, a number of people giving me condolences,” Bylsma said. “That was the hardest thing for me and them. They had to call me back and say, ‘Sorry, I didn’t mean that.’

“I don’t look back on it and begrudge anybody. I knew after we lost to the Rangers that I wasn’t going to be back.”

Firing him hasn’t radically transformed the Penguins. If anything, they’ve regressed under new coach Mike Johnston.

The talent-laden club, once the NHL’s most feared, eked into the playoffs last year by beating a hapless Sabres squad in the season finale before quickly getting bounced. Their offensive firepower has vanished.

The Penguins’ days as a juggernaut might be over.

They began their tilt Wednesday in Washington at 4-4 with only 13 goals, just 1.6 a game. Yes, a team with Crosby, Malkin and newcomer Phil Kessel has the NHL’s second-worst offense.

Right now, with just one goal and three points, Crosby is enduring the worst offensive stretch of his 11-year career.

“I don’t think anybody ever looks at Sidney Crosby and Evgeni Malkin and says, ‘Oh, we’re catching them while they’re not scoring,’” he said. “You always fear their ability to score.”

Bylsma, who was hired by Buffalo on May 28, will experience that fear for the first time tonight. Part of his growth as a coach was understanding how teams tried to eliminate Crosby and Malkin to beat the Penguins.