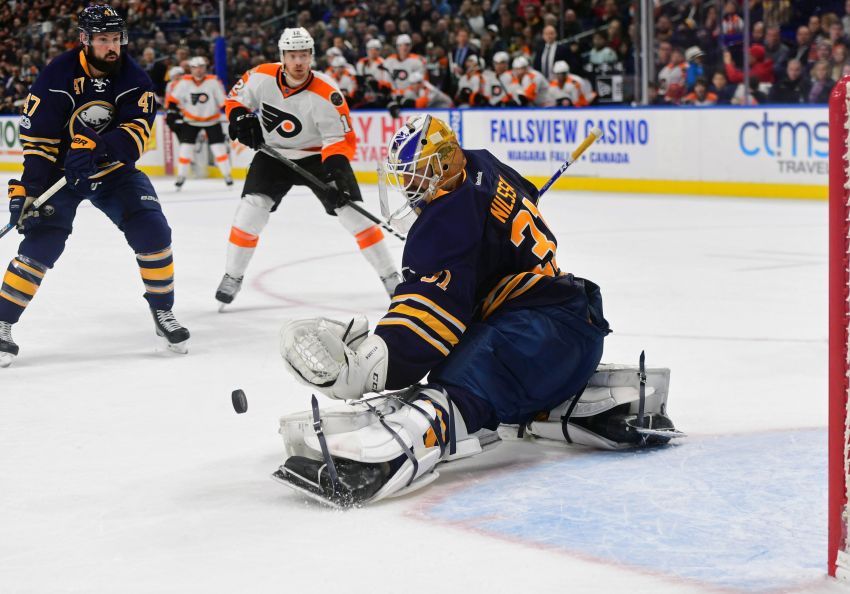 BUFFALO – With about 10 minutes left in Tuesday’s 4-1 win against the Philadelphia Flyers, as the Sabres closed out an impressive start-to-finish effort, center Ryan O’Reilly said he felt differently.

For one of the few times this season, the Sabres were in total control late, cruising to a victory instead of trying to eke one out or overcome a deficit.

“It’s been a while since we kind of had that feeling, last 10 minutes and you kind of know that you outworked that team and you’re going to win,” O’Reilly said.

The Sabres have 16 wins through 40 games, nine of them by just one goal. The resounding victories this season can be counted on one hand.

While the Sabres have played some entertaining affairs recently – Saturday’s 4-3 win against Winnipeg packed two games worth of action into the third period – they usually fall behind in those contests and roar back.

Tuesday’s tilt before 18,920 fans inside KeyBank Center was complete effort.

After a scoreless first period, the Sabres scored three times in the second, getting a power-play goal from Sam Reinhart and even-strength scores from William Carrier and Evander Kane. Unlike their 4-3 overtime loss Oct. 25 in Philadelphia, a game in which they blew a three-goal, third period-lead, the Sabres closed out the win.

“Up three goals, we know that we needed to do something different,” O’Reilly said. “We got to stay with the game plan. We were having success.”

The Sabres are 3-0-1 in their last four outings. Quietly, they have crept up the standings a bit. With 41 points, the Sabres trail third-place Ottawa by five points for the Atlantic Division’s final playoff spot.

Clearly, the Sabres built off Saturday’s dramatic come-from-behind win, which felt like it could change their season.

“We weren’t as focused on kind of the Xs and Os and kind of what they were going to do. We just kind of said, ‘You know what? Let’s go out and play hockey.’ That’s kind of what we did right away.”

Sabres goalie Anders Nilsson got in groove right away, making 13 of his 39 saves in the first period.

“I felt really comfortable today,” Nilsson said. “I think we played a pretty good game. We played a solid game defensively. Even though they had 40 shots, they didn’t have too many Grade A scoring chances.”

Only Brayden Schenn’s power-play goal with 2:07 left beat the backup.

“He should’ve gotten a shutout tonight the way he played,” O’Reilly said.

Bylsma added: “A little bit disappointed we didn’t come up with a zero there for him.”

The Sabres’ offense, meanwhile, has finally found a groove. They’ve scored three or more goals in four straight games for the first time this season. Marcus Foligno scored an empty-netter.

Reinhart, who practiced as a winger Monday, had two assists. But instead of going back beside center Jack Eichel, who played his 100th NHL game, Reinhart stayed in the middle, centering Kane and Justin Bailey.

After a slow start – Kane cracked four ribs opening night, then didn’t score his first goal until Dec. 3, his 13th appearance – the eighth-year winger has quietly been among the NHL’s hottest players.

Kane has scored all 10 of his goals in the last 17 games and hasn’t gone more than two contests without scoring.

After returning early from an appendectomy, O’Reilly has three straight two-point games.

“Once that injury happened, looking at how many games I was going to miss, not sure, I just never had an injury like that,” O’Reilly said. “It was definitely nice to get back to the team quicker and be a part of this.”