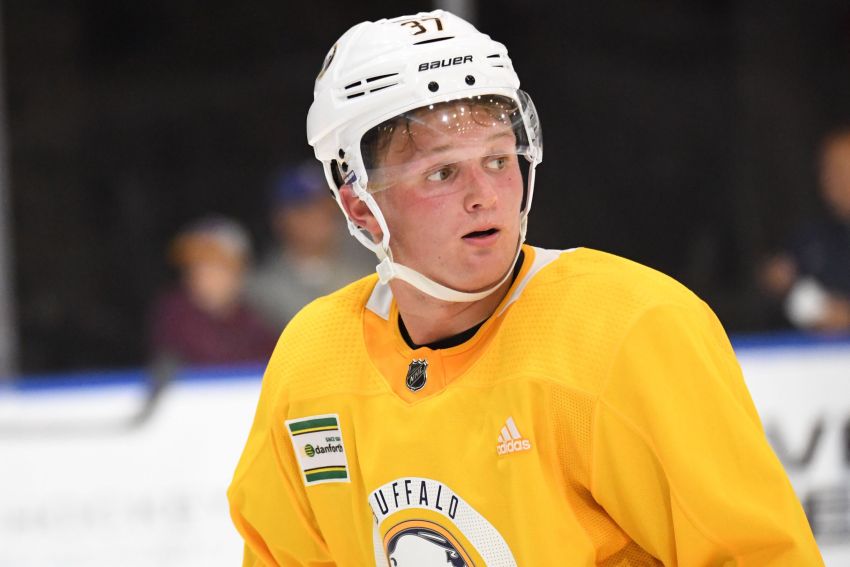 Casey Mittelstadt is one Sabres rookie who could contribute this season. ©2018, Micheline Veluvolu

To Okposo, a 10-year NHL veteran, the newcomer “seems to have all the tools” to succeed at hockey’s highest level.

“His release is, I mean, he scored a few goals just kind of in informal skates that just kind of make your eyes open, for sure,” Okposo said Wednesday following a late-summer skate. “What impressed me, obviously, was his release, how good it is, but how soft his hands are around the net, how fast he is. Like, he’s able to just get up and go. …

“I’m looking forward to see how he does in camp.”

So, Okposo was describing Rasmus Dahlin, the defenseman the Sabres drafted first overall, right? Well, no. How about Casey Mittelstadt, one of hockey’s top center prospects? Not exactly.

Try winger Victor Olofsson, the Sabres’ seventh-round pick in 2014 and the Swedish Hockey League’s reigning goal king. Olofsson, 23, is about to start his first season in North America.

When the Sabres open rookie camp this afternoon inside HarborCenter, all eyes, understandably, will be on Dahlin and Mittelstadt, two legitimate Calder Trophy candidates.

Dahlin, 18, might be the best defense prospect in decades. The Swede is expected to help transform the Sabres into a contender. Meanwhile, Mittelstadt, 19, played six late-season NHL games last season, compiling five points following a terrific freshman campaign at the University of Minnesota.

But there are other youngsters who could crack the Sabres and become notable contributors. They can take some big steps during the Prospects Challenge rookie tournament, which kicks off Friday.

Olofsson developed into one of Europe’s most lethal scorers a year ago, compiling 27 goals in 50 games as Dahlin’s teammate with Frölunda HC. Somehow, the Swede lasted until the 181st pick four years ago.

So the Sabres potentially have three or four rookies who could be big contributors.

“You don’t see that very often,” Okposo said of the deep rookie class. “But that’s the way the league’s going. You see how kind of what Toronto’s done the last few years and some of these teams with younger guys that are really taking the bull by the horns and just playing well.

“The game has changed a lot since I came into the league (in 2008). You really had to earn your stripes. You still have to earn your stripes here, you got to earn your respect, but these young kids are coming in with no fear. Their skills are off the charts. If they can kind of harness that, just play to their abilities, they’re going to play.”

Winger Rick Martin scored 44 goals in 1971-72, then a rookie record, yet lost out on the Calder to Montreal Canadiens goalie Ken Dryden. Phil Housley, now the Sabres’ coach, compiled 17 goals and 66 points as a first-year defenseman in 1982-83.

Dahlin certainly possesses the talent to enjoy a dynamic rookie season. But for Okposo, something else stands out more than Dahlin’s talent.

“First thing you notice is his off-the-ice stuff, his drive, his desire to get better and just work,” Okposo said. “He’s an extremely, extremely humble kid. (He’s a) good person, first and foremost. He does seem like he’s got a really good head on his shoulders, so from that standpoint, he gets an ‘A’ in my book.

“On the ice, he’s a special talent. I think everybody knows that, everybody saw that. Now it’s just going to be adjusting to the pro game and adjusting to the North American game. He’s a smart enough guy where he might be able to make the transition a bit quicker than a lot of guys.”

3 thoughts on “Sabres could have special rookie class”