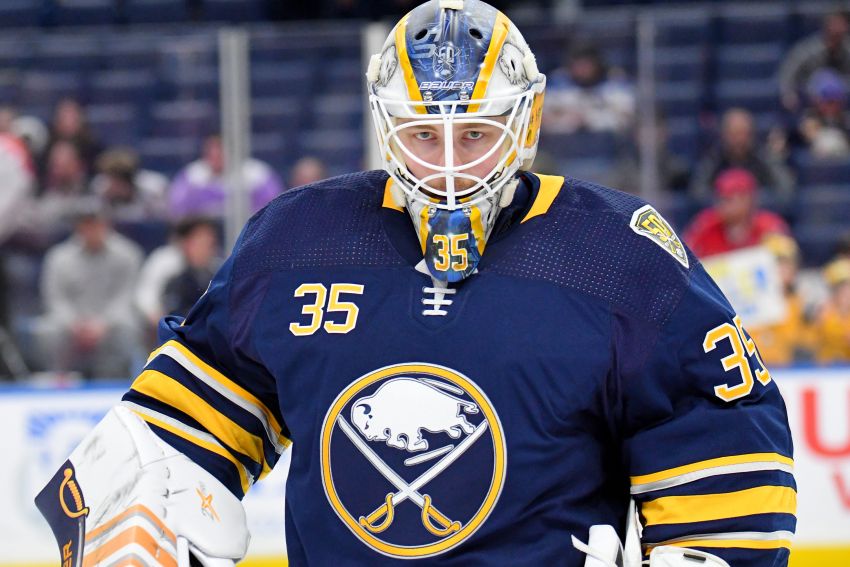 When Kevyn Adams took over the Buffalo Sabres and started gathering information on his team, he made it a priority to ask the coaches their feelings about the goaltending.

“One of the most important first conversations,” said the general manager, who will likely be busy Friday when free agency opens at noon.

Linus Ullmark, 27, thrived last season in his first prolonged run as an NHL starter, developing into the Sabres’ backbone. After beginning the year as Carter Hutton’s backup, the Swede stole the No. 1 job from the struggling veteran.

“Everybody feels really good about the steps that Linus took last year, and we’re excited about him,” Adams said on a Zoom call Monday. “If you look back at his track record on kind of where he came from and the success he had and the steps along the way, he’s had a good progression. He had a very good year last year.”

The sample size, of course, is small. The COVID-19 pandemic prevented Ullmark from cracking the 40- or 50-game mark. His stint as a workhorse – he started 13 out of 14 games at one point – barely lasted two months.

Still, Ullmark’s exploits generated optimism he could morph into a No. 1 goalie. It’s unclear if the Sabres will give him that opportunity.

Adams must address a slew of needs this offseason as he tries to construct the Sabres into a playoff team. Goaltending might rank at the top of the list.

“I am not sold on the Sabres’ goaltending as is,” said one scout who’s familiar with the team.

Ullmark is still a question mark. Meanwhile, Hutton, 34, is entering the final year of his contract after enduring a bizarre season.

After winning his first six starts, Hutton began a stunning 102-day stretch in which he compiled a ghastly 0-8-4 record while posting a 4.04 goals-against average and an .872 save percentage. After winning Oct. 22, he did not earn another victory until Feb. 1.

Following the season, he revealed to The Buffalo News he suffered from a vision problem that hurt his ability to track the puck.

After working to correct it, Hutton enjoyed a 6-2-0 run in February while Ullmark was injured. Still, the Sabres likely don’t envision Hutton as more than a backup in 2019-20.

So what should Adams do?

The Clarence native could find someone to compete with Hutton and Ullmark. He could get an established goaltender to be the starter for a year or two, perhaps until prospect Ukko-Pekka Luukkonen is ready to graduate to the NHL. He could also acquire a bonafide No. 1 in or entering his prime. Naturally, the cost would be steep.

Adams has interesting options he can pursue. The market is about to be saturated with notable veteran goalies. Others will be available via trade.

Khudobin, 34, Markstrom, 30, and Talbot, 33, are the best of that group. Khudobin just led the Dallas Stars to the Stanley Cup final.

It’s believed the Columbus Blue Jackets are willing to trade one of their 26-year-old goalies, Joonas Korpisalo or Elvis Merzlikins.

The Senators upgraded by adding a 26-year-old who backstopped two Stanley Cup winners. Adams might respond by bolstering his own net.

The Sabres could have a much different lineup in a few days. Rookie GMs often put their marks on their team right away.

If center Johan Larsson leave as a UFA, the Sabres must replace one of their longest-tenured players.

They also have an unbalanced defense corp – four right-handed shots and two lefties – Adams has mentioned.

The Sabres also need an infusion of scoring. There are a dearth of top-six forwards available in free agency, meaning Adams would likely have to grab one through a trade.

Winger Dominik Kahun figured to have a spot on the second or third line in 2020-21. Then the Sabres did not give him a qualifying offer Wednesday.

Adams said the Sabres could still re-sign Kahun, who can hit the open market at noon.

If Kahun bolts, Adams has another hole to fill.