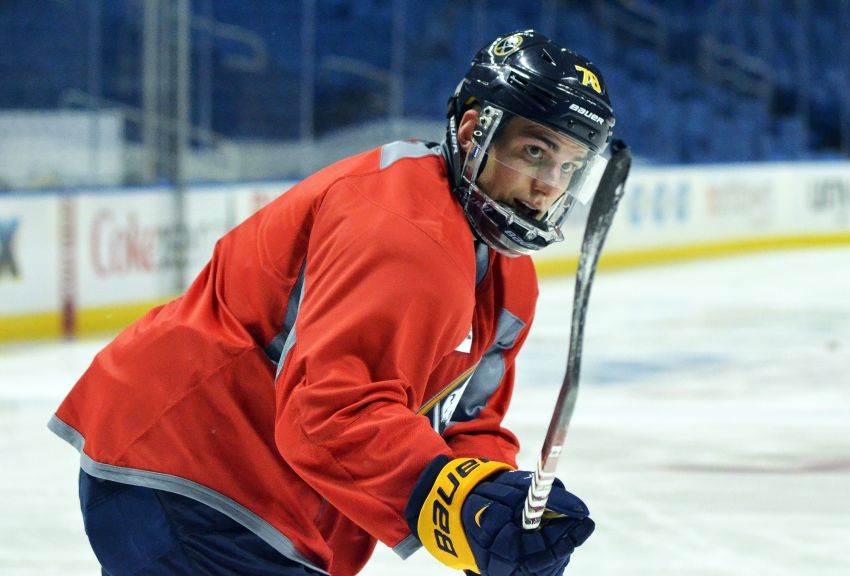 BUFFALO – Sabres winger Corey Tropp holds no grudges against Jamie Devane, the 6-foot-5 tough guy who broke his jaw during a Sept. 22 preseason fight in Toronto.

The scrap ignited a huge brawl and became the talk of hockey world. Sabres enforcer John Scott, who immediately went after Maple Leafs star Phil Kessel, has said Devane shouldn’t have punched Tropp a final time and driven his head into the ice.

But the gritty Tropp said Devane had no intention of injuring him.

“Obviously, he got the better half of me on that one. It is what it is,” Tropp, who began practicing with his teammates again today, said inside the First Niagara Center. “He’s a good player, and that’s all it is to it.”

Tropp said a “mutual decision” led to the fight. The broken jaw, well, that’s part of the job.

“If you do that type of stuff enough, eventually something like that’s going to happen,” Tropp said.

Tropp, who’s five inches shorter than Devane, said he simply lost his balance and Devane followed through on a punch.

“No matter who you are or what type of incident it is, there’s no intent to try to do something like that,” Tropp said. “It doesn’t matter if you absolutely hate the person. It’s an accident. I think you’ve seen it a lot lately where guys, when they fall, you can’t really control how they’re going to fall or what’s going to happen.

“I don’t believe it was his intention. He seems like a pretty honest fighter watching some of his fights. That definitely wasn’t his intention by any means.”

Tropp, Sabres coach Ron Rolston said, is still a couple of weeks away. Tropp skated in a red jersey today, meaning he hasn’t been cleared for contact.

The 24-year-old wouldn’t speculate on his return.

“Right now, that’s between me and the medical staff,” he said.

Tropp almost certainly would’ve secured a roster spot out of training camp. He also hurt his knee in the AHL opener last year and missed most of the season.

Tropp underwent surgery following the fight and had his jaw wired shut for 10 days. He still closes it with rubber bands when he’s not eating, skating or working out.

In other injury news, winger Ville Leino, out since cracking a rib opening night, practiced today and hopes to return later this week.

“It’s going to be now getting into practice and bumping and stuff,” Rolston said. “But he’s able to do that.”

Meanwhile, Cody McCormick practiced after swelling sidelined him for Saturday’s 4-2 loss to Colorado. The forward blocked a shot Thursday.

Update: To make room for Ristolainen on the 23-man roster, McCormick has been placed on injured reserve.

One thought on “Sabres’ Corey Tropp practicing again, not upset with Jamie Devane”