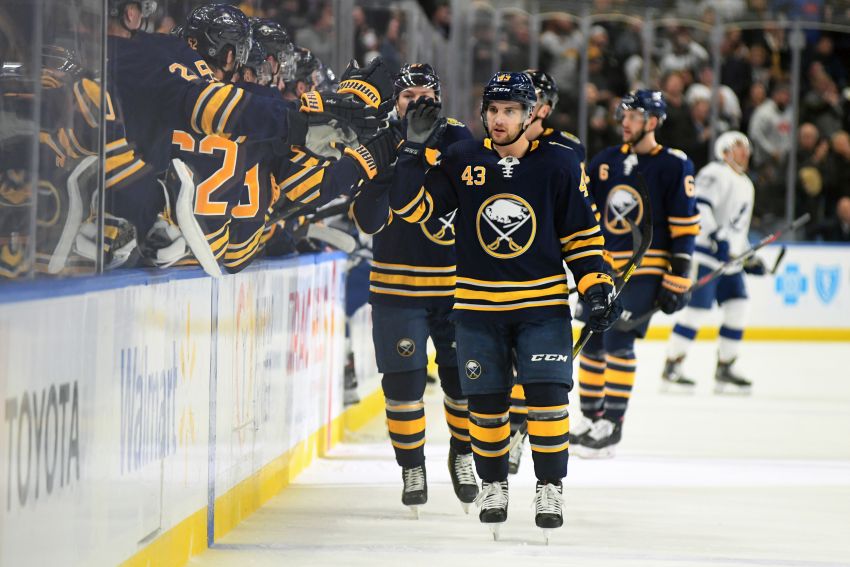 BUFFALO – In his five-year NHL career, Sabres winger Conor Sheary said he had never experienced being a healthy scratch until last month.

“That was something different for me,” said Sheary, who sat out three times over a six-game stretch.

But in his first half season as Sabres coach, Ralph Krueger has established he’s willing to scratch anyone.

Krueger benched forward Evan Rodrigues on opening night and has kept sitting him out for months. In his 12-year career, defenseman Zach Bogosian had never been a healthy scratch until Dec. 12. Bogosian has sat out seven of the last nine games before returning for Thursday’s 3-2 overtime win against the Edmonton Oilers at KeyBank Center.

“(The way) our coaching staff operates, it doesn’t matter who you are on our team, anyone can be in or out,” said Sheary, who won two Stanley Cups with the Pittsburgh Penguins. “You got to be ready when your name is called. It creates a good environment in the room, a competitive environment, guys want to stay in the lineup.”

Sheary was lucky to stay in the lineup as long as he did. After scoring twice opening night, he mustered only three goals in his next 26 games. He endured a 19-game goal drought before scoring twice Dec. 2.

Krueger yanked Sheary on Dec. 10. After sitting out twice, he played three times before getting scratched again.

“You can’t come in down on yourself, on the team or be mad at anyone,” he said of sitting out. “I think it’s part of the business. I think just coming in with a fresh mindset every day and just knowing it is a new day and you can prove yourself again (helps). I tried to approach it that way as much as it was difficult as times.”

In his last few outings, the speedy Sheary, 27, has looked more the player who scored 41 goals over a two-year stretch before coming to Buffalo.

The American scored in Tuesday’s 6-4 loss to the Lightning, part of a three-point, four-shot night. In Friday’s 3-0 loss to the Bruins, he pumped a season-high five shots on goal.

“I hope it grows some confidence,” Sheary said of scoring. “I think the last stretch of games I’ve been a little hard on myself, just in and out of the lineup and all over the place. But I think if I can find a consistent game, I can provide some secondary scoring for the team.”

It’s usually easy to tell if Sheary, who played with center Marcus Johansson and Jimmy Vesey on Thursday, is enjoying a good night.

“The telltale sign for myself when I’m playing my game is if I have my legs, and I think since we got back from Christmas break I feel like I’ve had that and I feel like I’ve been going pretty well,” he said. “I’ve created some good chemistry with some guys I’ve been playing with and that really helps.”

He added: “Another big thing is creating turnovers. I think, again, it all stems from how I’m moving. I think I create turnovers a lot and force defensemen to make plays they probably shouldn’t if I’m on them quick.”

“Conor very clearly now has a picture of the game he needs to play,” he said. “We’re excited to see him here the last handful of games. We’re really confident he’s going to be a difference-maker in the second half. He’s got a great spirit, he’s a sparkplug, he brings great energy on the forecheck and is deceptive in his offensive game.”

The tough guy made his NHL debut in Tuesday, skating just one minute, 26 seconds.

Smith, 27, stayed with the Sabres on Thursday, skating in the pregame warm-up before being scratched.

Smith had played on an AHL deal with the Rochester Americans the last three seasons.