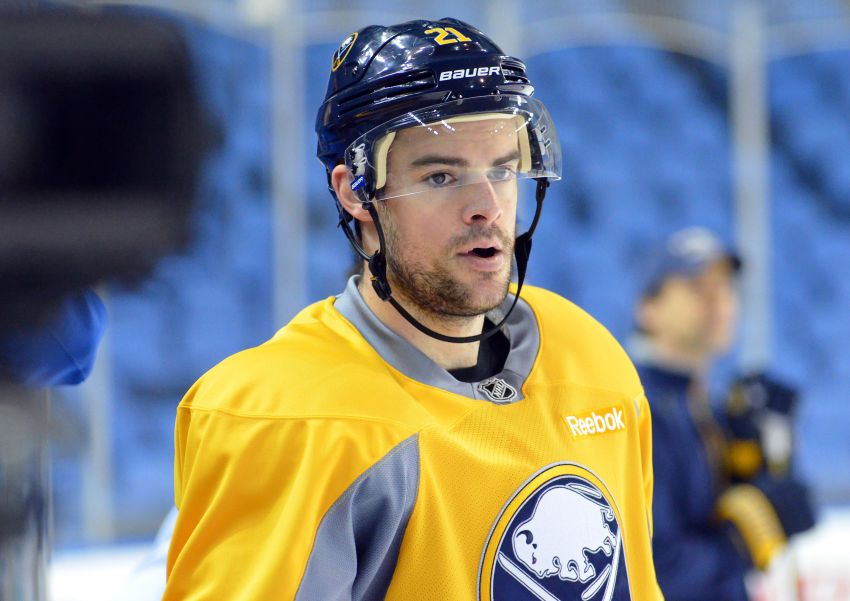 The 28-year-old missed the net on a glorious opportunity against a stickless goalie, drew a penalty after zooming to the crease and got stymied on a late breakaway by Craig Anderson with the Sabres down a goal.

No one embodies the Sabres’ scoring struggles more than Stafford entering this afternoon’s tilt against the Calgary Flames inside the First Niagara Center.

Thirty-two games into the season, Stafford has two goals on 77 shots, a 2.6 shooting percentage. The Sabres, meanwhile, have 50 goals as a team, just 1.6 a game.

But Stafford and the offense finally appear poised to bust out.

“It’s got to turn around sooner or later, and when it does,” Stafford said Friday, “it’s going to be pretty awesome.”

Despite scoring only two times in the last two games, the Sabres have pumped 77 shots on goal. They’re creating prime chances and sustaining an attack for probably the first time this trying season.

“There’s a point where you start getting shots, and then there’s a point of how to get the shots past the goaltender,” interim Sabres coach Ted Nolan said. “We have to get more net-front presence in front of him.”

He added: “We just got to get some people in front of the net, and good Lord willing the puck will start going in.”

Of course, they’re showcasing an alarming lack of finish. Still, when you’re on pace to become the worst offense in NHL history, you take progress where you can find it.

Eventually, players believe, the puck has to start going in the net.

“It’s statistics,” Sabres center Tyler Ennis said. “When you get that many good chances and create that much, they’re going to go in.”

Stafford has taken the attitude the offense will improve.

“Dwelling on things you’re not going to go anywhere,” he said. “Your tires are going to be stuck in the mud for a long time. I’m just trying to stay positive.”

The offense could be the last part of the puzzle. Goalies Ryan Miller and Jhonas Enroth have been strong all season. The defense has improved greatly under Nolan, trimming the shot totals dramatically.

“We’re not giving up 50 shots a game anymore,” Stafford said. “But at the same time, we’re not putting the puck in the net. That really is the last missing piece, and once that goes, I think we’re going to start winning a lot of games.”

The slick Ennis has finally started scoring, compiling three goals and four points in the last four games, including the lone score Thursday. He had four goals in the first 28 games.

Nolan often watched Ennis play in junior years ago, although he hadn’t seen much of the 24-year-old in the NHL prior to taking over the Sabres on Nov. 13.

“What I remember is exactly what I’m seeing right now, a dynamic player,” Nolan said. “He had some tremendous agility. … He’s starting to use his skill set to his ability. It’s starting to pay off for him.”

Ennis, who recently switched back to center, feels he “finally got that swagger back with the puck, flying around through the neutral zone with the puck and making plays.”

He loves that Nolan allows him to be creative instead of making him follow a rigid system.

“I still got to stay within the lines and play the system,” Ennis said. “I think with my creativity I need to be kind of free to do some different things, and Ted has kind of allowed me to do that. It’s a little liberating.”

Stafford, meanwhile, might be playing his best hockey since late 2011-12. He’s noticeable on the ice again, making two or three plays a game.

He hasn’t been rewarded on the score sheet, though. His career-long goal drought is 16 games.

“It’s tough because you want to get rewarded for your play,” said Stafford, who hasn’t scored since Nov. 5. “I feel as though my overall play has been there. I feel like I’m playing well. Unfortunately, the offensive side of things aren’t there.”

The law of averages, Stafford said, might help him start scoring.

“I’m a big believer in the percentages and the science behind it,” he said. “For myself, individually, it’s been about a year of getting a lot of shots and my shooting percentage is lower. Over my career I’ve been about a 10 percenter, and it’s always come back around. It’s just happened to be a lot longer than usual … for a lot of other guys in here as well. It’s not just me, it’s pretty much everybody.”