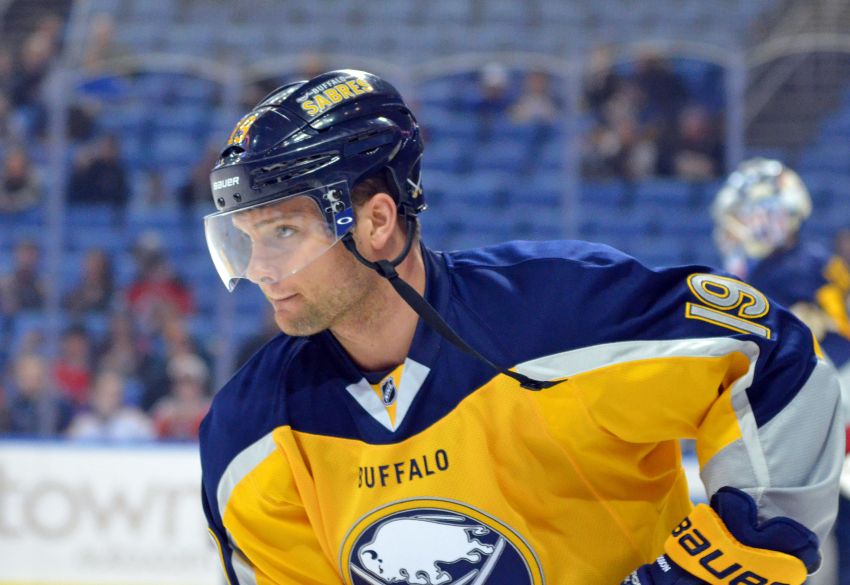 BUFFALO – Ted Nolan doesn’t want to project his lineup too far into the future. But the Sabres coach said he must evaluate his top six forwards these last two weeks so they receive enough ice time next season.

If Tyler Ennis and Zemgus Girgensons are his top centers, where does that leave Cody Hodgson?

For the time being, on the left wing, a position Hodgson had played once in his career before Saturday, during a 2008 exhibition game.

“I don’t think I was very good at it,” Hodgson joked prior Tuesday prior to the Sabres’ 3-2 shootout win against the New Jersey Devils inside the First Niagara Center.

Hodgson, the Sabres’ No. 1 center much of the season, said he likes the move. He’s been playing beside Girgensons and Brian Flynn.

Nolan told Hodgson moving would “allow you to get some different opportunities, different looks.”

“It’s worked out great, exactly what he said,” Hodgson said.

Hodgson ended an 11-game goal drought in his first appearance at left wing, tipping Christian Ehrhoff’s shot in front of the net. Nolan said following the 4-3 overtime loss to Tampa Bay it was possibly Hodgson’s best game since he took over in mid-November.

“We want to see where he best fits with the team moving forward,” Nolan said about Hodgson. “Maybe he’s a better winger. Also, you have to get him with the right people, get him the puck because once Cody has the puck within a certain footage of that net, he has a good chance of putting it in.

“He’s not known for his great defense, and we don’t want him to play great defense. We want him to score offensively. But you have to be reliable defensively. One thing about the wing position, it’s not as complicated as playing center ice.”

What’s different about playing on the side?

“I think it allows you to get a little more speed away from the puck,” said Hodgson, who played right wing briefly recently. “As a centerman, you kind of always got to be around it and controlled. Wing, you can take off and get going before the puck comes to you a little bit.”

Nolan, who discussed moving Hodgson with Sabres general manager Tim Murray, said the line has “hit it off.”

“They’re all good skaters,” he said. “They back the defense a little bit up with their speed. He’s an offensive threat once people get him the puck. We need some people getting him the puck. Last game I thought they complimented each other well.”

Meanwhile, Murray told WGR the Sabres are close to signing Wisconsin defenseman Jake McCabe, the 44th pick in 2012. The 20-year-old would report to Buffalo if he signs.

Nolan, who signed a three-year contract extension Monday, on if being the regular coach feels any differently: “The one thing that feels good is being wanted and being in the position that I am now. As far as my job goes on a daily basis, no.”