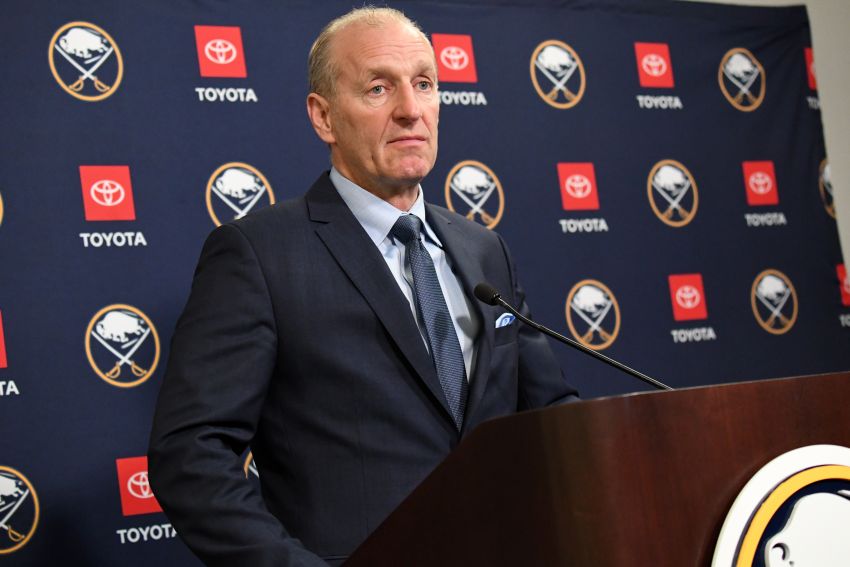 Ralph Krueger said the day the NHL suspended the season “was a blur.” ©2020, Micheline Veluvolu

The Buffalo Sabres occasionally enjoy a team dinner together, and they happened to be gathered for one in Montreal when word began spreading an NBA player had tested positive for coronavirus.

“Everything kind of started unraveling from there,” Sabres coach Ralph Krueger said on a conference call Monday. “We weren’t sure where that would take us.”

Still, the Sabres began the next day, March 12, like they would play their scheduled game against the Canadiens that night. But shortly after the coaches arrived at the rink, Krueger said they were told to return to the hotel.

That’s where general manager Jason Botterill informed the Sabres, who have 13 games left on their schedule, the NHL would be suspending its season indefinitely because of the COVID-19 pandemic.

“It was shocking at the time,” Krueger said. “We were high-intensity into the season and suddenly the ground just fell out from underneath us. We’re extremely disappointed that we weren’t able to play those 13 games to date and hopefully something still pops up here and we’re still hanging on to that hope.”

Krueger said the Sabres flew to Buffalo after the meeting and “everybody went into their own quarters and quarantined from the moment we arrived home.”

Last week, the NHL informed players they could go to their offseason homes and announced a best-case scenario for the season to resume would be mid-May. Krueger said he returned to his home in Switzerland early last week.

While Krueger has kept in contact with everyone during this period of social distancing – “Text messages flying around right now,” he said – he never had an opportunity to address the team before everyone dispersed.

“If anybody would’ve told me the meeting we had in the hotel in the afternoon of the Montreal game was going to be the last time we were going to be together in a group, I wouldn’t have believed you at that time,” Krueger said. “We thought we were heading toward practicing together in a short period of time. …

“We never did have that final conversation yet. But hopefully, that opportunity comes quicker than later.”

Clearly, having his first season paused as Sabres coached has hit Krueger hard. He said he’s “exercising in an extreme way” to clear some of the withdrawal he feels. He finds himself looking at the Sabres schedule he has posted in his office.

Remember, in 2012-13, Krueger’s other season as an NHL head coach with the Edmonton Oilers, the lockout shortened the schedule to 48 games.

“I do wonder should there be regular season games, what the combination would be and how many,” Krueger said. “We all know there are a lot of different possibilities out there, but yeah, for sure, I think we’re all going through a withdrawal. But the health of the world and the health of the people we all care about that are dear to us has certainly taken a priority in a shape, way and form that we have never seen in our lifetimes. It’s got to be a focus on that right now and that’s got to dominate.”

Krueger wouldn’t address some scenarios that could materialize if the season resumes. The NHL could forget about the regular season and start the playoffs immediately, meaning the Sabres would be finished. Under an expanded 24-team postseason format being bandied about, the Sabres would still miss out. They rank 25th overall.

So the Sabres would likely only play games again if the NHL picks up the regular season.

“It’s too early to do a season end, because I’ve just been trying not to let my brain go there until that plug is actually pulled on us,” Krueger said. “Again, we were in a painful spot knowing that the playoffs had slipped out of reach, but we also felt there was still a lot of opportunity for growth and a commitment by the players and a willingness by the players to stick to the plan, which I think was important at that point.

“It remains hypothetical right now where we would’ve gone the rest of the season.”

Krueger said he and his coaches are “in a ready mode if for some reason we get a chance to play some games.”

“We’ll be able to take the guys quickly into a mini camp and reactivate them,” he said.

Krueger said it’s clear from his contact with the players “they’re doing their best under the circumstances to train.”

“Some of them have excellent facilities at home, where they’re able to keep themselves in shape, some are in areas where it’s not even easy to go out for runs,” he said.

“At the moment, all of us feel out of control and we all feel uncertainty and we all feel discomfort. There is … all about taking care of your family, your friends, making sure the people of Buffalo – our fan base – are OK and doing the right things and for the world beyond, this challenge gets mastered before it creates and causes more damage.”

Whenever hockey returns, Krueger knows the sport will have special meaning for fans.

“Sports will be very important out the other end of this, I know that,” he said. “We just have to be ready when that call comes, that we do our part to get the world in motion in the right direction again.”

As part of a mentorship program from the NHL Coaches’ Association, Krueger will be delivering an online seminar to European coaches during the stoppage.