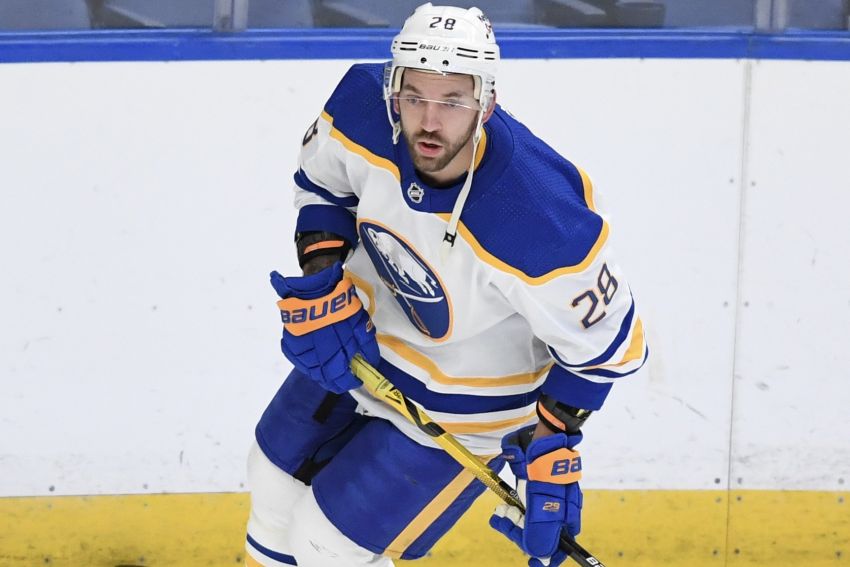 Granato wanted two veterans who possess the ability to make everyone around them better.

He added: “Two of our veteran guys that have a passion and love for not only the Sabres but Buffalo.”

The Sabres, a rebuilding team filled with 20-somethings, will use two alternates this season instead of having a captain. Jack Eichel, who refuses to undergo a neck surgery team doctors recommend, was stripped of the captaincy last month.

Okposo, an alternate captain last season and earlier in his career, expects some of the Sabres’ young players to grow into leadership roles this year.

Girgensons, 27, is beginning his ninth season. He missed all of last season after undergoing hamstring surgery during training camp.

“We missed him so bad last year,” Sabres winger Victor Olofsson said. “He takes so much responsibility, both five-on-five and on the penalty kill. Yeah, I think he’s probably one of the tougher guys to play against in this league.”

Girgensons has never worn a letter in the NHL. He said he recently wore one representing Latvia at an Olympic-qualifying tournament.

The affable Okposo, 33, is Sabres’ second-oldest player behind goalie Craig Anderson. The American is starting his 15th season.

Olofsson said Okposo is “probably the most professional guy I’ve ever played with.”

“He’s super humble,” he said. “He’s been in the league for a very long time. He just takes good care of everyone, especially the young guys coming in. He talks to everyone to make sure everyone feels good. He’s just a really good guy to have on our team and, yeah, I just appreciate playing with him.”

Girgensons said he has watched the way Okposo, who joined the Sabres in 2016, carries himself.

“He’s a pro on and off the ice,” Girgensons said. “I mean, everything about him, his leadership and just being around him for the years. It definitely has brushed off on me.”

Okposo said he tries to take a vested interest in his teammates and get to know them as people.

“If somebody’s down or whatever, I’m going to go say something. I’m not just going to avoid the conversation. And if I feel like something needs to be said, if I’ve got to give a guy a push, I will, too, or if I’ve got to comfort somebody, I will. I just try to have genuine, authentic relationships with everybody I interact with.”

Sabres winger Drake Caggiula hobbled off the ice during Tuesday’s practice after winger Jeff Skinner slid into him, knocking his feet out.

Granato did not have an update on Caggiula. John Hayden finished the session in Caggiula’s spot at right wing beside center Dylan Cozens and Anders Bjork.

“We need intense practices right now,” Granato said. “We’re preparing for a game, obviously, but we hope that the game feels easier because of the intensity of practice. So we’re trying to deal, put these guys in situations with very limited time and space to make plays and challenge them in that regard.

Based on Tuesday’s defense pairings and line combinations, defenseman Will Butcher and forward Arttu Ruotsalainen could be scratched for Thursday’s season opener against the Montreal Canadiens.