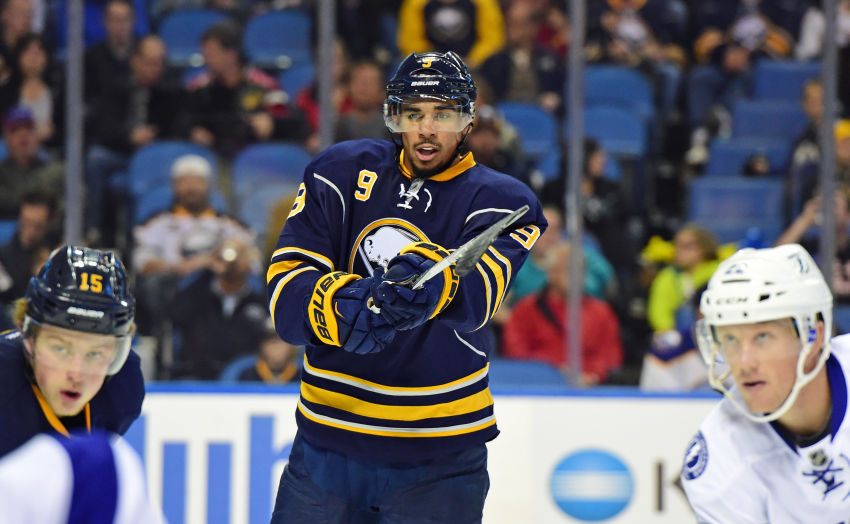 McGinn, however, didn’t last long on the second line.

Bylsma moved Marcus Foligno up beside Eichel early. Zemgus Girgensons, who practiced with Eichel on Friday, also received some time. So did Tyler Ennis and Sam Reinhart. Then McGinn went back late in the Sabres’ 4-1 loss to the Tampa Bay Lightning inside the First Niagara Center.

“We got to be thinking on the fly,” McGinn said. “We can’t worry about that. Whenever your name is called, you have to be ready to go.”

Bylsma has been trying to keep a center and one winger intact and change the third piece.

“I think for the most part you see pairs going on the ice and some other guys getting opportunities with those guys,” Bylsma said. “Sometimes we’re going to see players play more than other players. … I haven’t necessarily found exactly what we’re looking for with that piece yet.”

Some experimentation is expected. The Sabres have a slew of new faces and a new coaching staff. But Bylsma often breaks up trios after just a couple of shifts.

“It’s fun to have a set lineup that doesn’t move,” Sabres winger Nick Deslauriers said. “But at the same time, when you’re losing by a couple goals and trying new things, you can see what (you have).”

With No. 1 goalie Robin Lehner injured, the Sabres recalled Nathan Lieuwen, 24, from Rochester to back up starter Chad Johnson prior to the game.

“He won the opportunity with his play in training camp,” Bylsma said about Lieuwen, who played two preseason games.

The Sabres sent goalie Linus Ullmark, who had surgery on both hips during the offseason, to the AHL on Saturday. The Swede, 22, started for the Americans hours later, his North American debut.

“I think we’d like to see the possibility of maybe seeing some of our goalies play in net as well, if we can get that opportunity,” Bylsma said. “Ullmark would be one of those guys.”

Bylsma had no new update on Lehner, who suffered a lower-body injury Thursday. Lehner underwent an MRI on Saturday and was placed on injured reserve. He will miss more than a week.

Notes: Eichel skated 18 minutes, 56 seconds and was a minus-1 against the Lightning. He took his first NHL penalty, an interference call, early in the second period. … Center Ryan O’Reilly, who thought he was “pretty useless out there” in Thursday’s 3-1 loss to Ottawa, won 11 of 14 faceoffs. … The Sabres scratched captain Brian Gionta (lower body) and defenseman Matt Donovan. … The Sabres also sent defenseman Jake McCabe to Rochester.