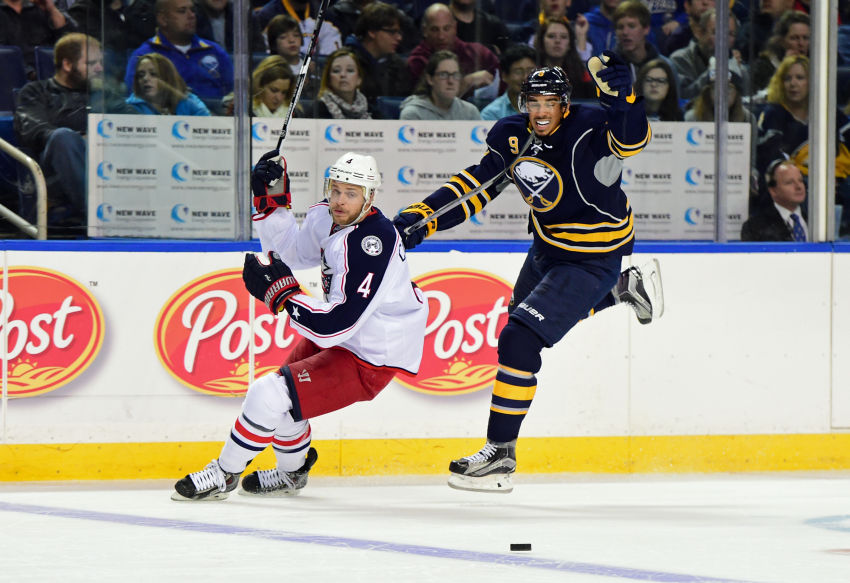 BUFFALO – For almost 40 minutes Friday, much of the optimism the Sabres created early in the preseason vanished as the Columbus Blue Jackets’ junior varsity squad throttled a lineup filled with stars and regular talent.

The Blue Jackets scored on two of their first three shots and led 3-0 after the first period. When they went up 5-0 8:15 into the second period, the Sabres had five shots.

“It wasn’t at all how we need to play, how we want to play, how we know we can play,” coach Dan Bylsma said after four third-period goals got the Sabres to within 5-4 before a late empty-netter.

Don’t let the 6-4 final score fool you. Six days before the season opener, a team using mostly AHL players and devoid of stars embarrassed the Sabres early on.

“You got to give it to them, too,” Sabres goalie Robin Lehner said. “They came in really hungry.”

At times, the miserable performance mirrored some from the past two seasons.

When the Sabres pumped their first shot of the second period on goal more than halfway through, some fans in the surly crowd of 17,578 inside the First Niagara Center responded with a Bronx cheer. Lehner, who posted a shutout Tuesday, received some similar treatment following an easy save moments later.

Lehner looked nothing like an NHL-caliber starting goalie most of the preseason. On Friday, he looked downright uncomfortable.

“I thought I was fighting the puck a little bit,” Lehner said. “I kept moving into shooting lanes … then I started making decisions that weren’t good for me. I started cheating a little bit. I made the wrong reads. I’ve been feeling good. I think we underestimated this team a little bit coming in. We got to learn from that.

“We saw in the third period how we can play. They just kept flying by us and they came with a lot of speed in the first half. I kept making the wrong decision.”

Remember, Lehner, a big summer acquisition from Ottawa, suffered a season-ending concussion in February. The Swede is still working his way back. He allowed 11 goals in 159 minutes of exhibition play, stopping 84 of the 95 shots he faced.

“I got to work on my details and just keep practicing, staying positive,” Lehner said. “You don’t want to let in five goals, but it’s still preseason. No worries.”

Some disjointed play around him Friday didn’t help.

As the game dragged on, pride might’ve kicked in for the Sabres. Jamie McGinn scored twice in the third period. Zemgus Girgensons and Evander Kane also scored.

“I don’t think much had to be said,” McGinn said. “That was not the way we wanted to start things. We knew we were a lot better than that. We’ll take the positive in the third period. That’s the way we were supposed to play.”

The Sabres finished the preseason 4-3. The good news? They scored 26 goals. The bad news? They allowed 27.

“Just the ease of which we have given them up is more of a concern,” Bylsma said.

Lehner added: “We’ve seen how we can play. Now, the next six days here, we got to tighten up a little bit and work on the details.”

With an assist, rookie Jack Eichel had two goals and six points in four preseason appearances.