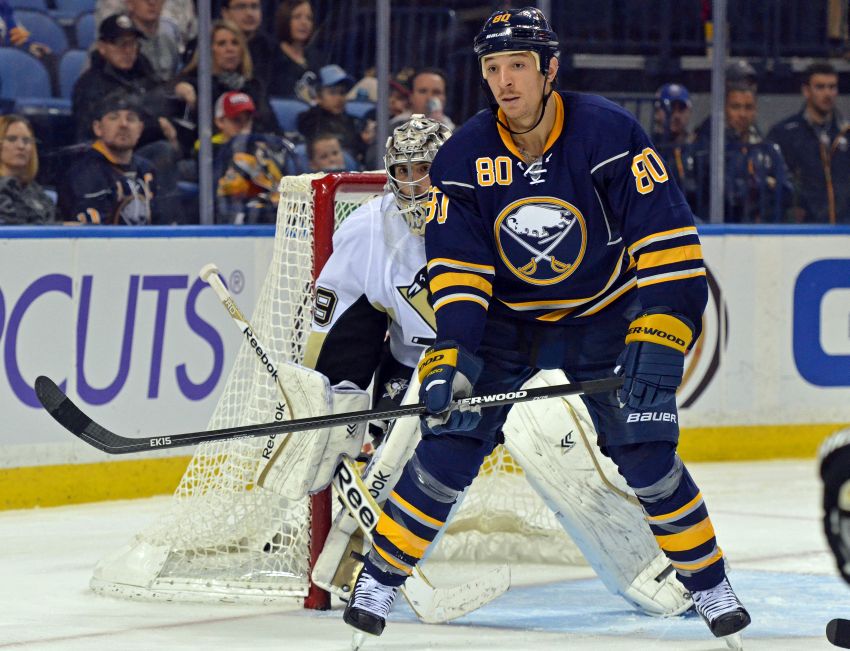 Still, a seething Stewart said getting scratched for the Sabres’ 1-0 win against the Los Angeles Kings on Tuesday was “a big surprise.”

“I’m not happy about it,” Stewart said Wednesday following a long skate. “I don’t agree with being a healthy scratch. But you take it on the chin like a man. I’m happy the boys got the win. That was a big two points. I put the work boots on and get ready for the next time I’m in the lineup.”

After beating an NHL power without Stewart, the Sabres host the Calgary Flames tonight inside the First Niagara Center. Will Stewart have to wait to return?

“Not necessarily,” Sabres coach Ted Nolan said. “That’s the toughest part, we had 20 guys that played their hearts out (Tuesday), played hard, hard.”

Stewart, who ducked the media Tuesday, is clearly upset Nolan accused him of “playing a soft game.” The 27-year-old has fought heavyweights Brandon Prust and Milan Lucic this season.

“I don’t think I’m a soft player,” Stewart said. “You can ask Prust, you can ask Lucic about how soft I am. I’m sure they’ll have a good answer for you.”

Stewart knows he must “contribute physically” if he’s slumping offensively.

“I guess I got to start looking for some big hits and chasing some hits and bringing that physical play,” he said. “I guess that’s what he wants from me.”

At times, Stewart showcases flashes of his old self. He bulled his way to the net for a late goal Nov. 2 against Detroit, his first score in 33 games going back to Jan. 9, when he played with St. Louis. He had two slick breakaway goals during a three-game stretch two weeks ago.

It appeared then Stewart had turned a corner.

“I thought so,” he said. “If I could bottle up what I’ve done in those two games, I think I’d be a pretty good player.”

Stewart was benched for part of last Thursday’s 5-0 loss in Tampa Bay, the “pirouette game.” He skated a season-low seven minutes, 48 seconds as a fourth-liner in Saturday’s 3-2 loss in Florida.

What has happened to Stewart?

“If I had an answer, I probably would’ve made changes a long time ago,” he said. “I feel like I’m working. I know some funny things happen in this game. I’m capable of getting hot and rattling off some goals here. I just got to wait for that opportunity.”

That opportunity could come somewhere else.

Despite all of his recent struggles, Stewart’s name keeps popping up in trade rumors. As an unrestricted free agent following the season, he might be a low-risk addition. This slump, however, could hurt his future.

“I can’t read into that,” Stewart said. “I can only take it one day at a time. Obviously, this isn’t an ideal situation to be in for my contract year right now. But I got to stay positive and you can’t really read into all that speculation. Since I’ve got here, as long as I’m a Buffalo Sabre, I’m just going to worry about being one.”

Nolan said he will chat with Stewart “shortly.”

“No words is louder than words sometimes,” Nolan said. “People get the message. The only thing with Stewy is get him to play hard like everybody else, and sometimes how you send a message to certain people is a little bit different than others. He’ll rebound. He’s a pro. He’s a powerful forward in this league. He’s a good player.”

Nolan on if Jhonas Enroth, who will start tonight for the eighth time in nine games, is the No. 1 goalie: “Calling a No. 1 line, a No. 1 (goalie), I think it’s just status. Jhonas is playing well. Whoever plays the best is No. 1.”

Former Sabres goalie Clint Malarchuk will sign copies of his book, “A Matter of Inches: How I Survived in the Crease and Beyond,” at the Sabres Store tonight from 6-7 p.m.