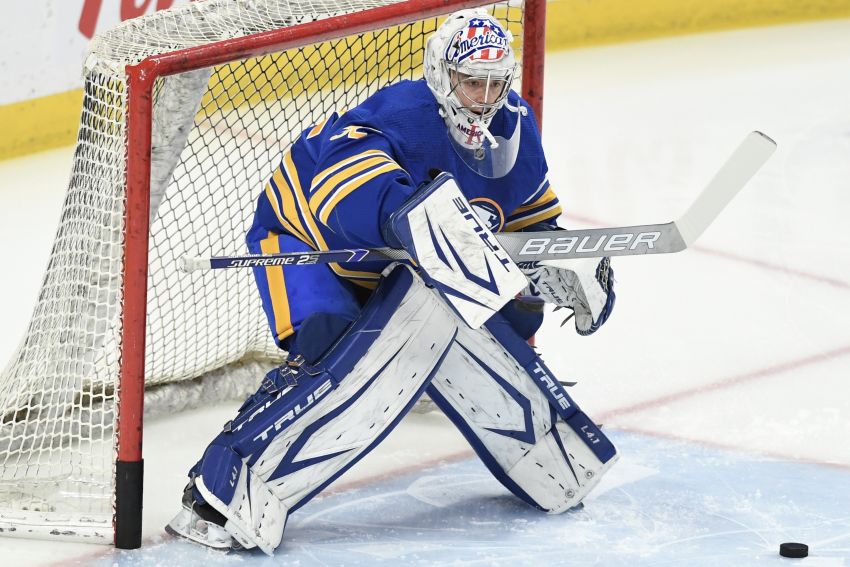 Tage Thompson cleared the NHL’s COVID-19 protocol last week and has played two games since exiting. Still, having tested positive for the virus less than 10 days ago, the Buffalo Sabres center can’t travel to Canada.

So Thompson, who has scored 12 goals this season, won’t play in tonight’s game against the Ottawa Senators, Sabres coach Don Granato said.

Granato also said the Sabres will be without winger Vinnie Hinostroza, who suffered an undisclosed injury in Monday afternoon’s 3-2 overtime loss to the Detroit Red Wings. Hinostroza played just one shift in the third period.

To replace the forwards, Granato said Mark Jankowski and Brett Murray will move into the lineup.

Houser, 29, was playing for the Rochester Americans on an AHL deal when injuries forced the Sabres to ink him. He has backed up Aaron Dell the last three games.

Late last season, Houser became one of the NHL’s feel-good stories, playing his first four NHL games. After beginning the year on an AHL contract, the Sabres signed him to a two-way deal and summoned him to the taxi squad.

When Ukko-Pekka Luukkonen was injured and Dustin Tokarski left the team for a personal matter, Houser started the Sabres’ last four games. He performed well, compiling a 2-2-0 record with a 3.46 goals-against average and a .901 save percentage.

“The confidence that you gain in Houser, you’ve seen him last year so you know how well he prepares for his opportunity,” Granato said on a Zoom call this morning. “And you put him in a game tonight, obviously, you want to support him as best you can as a team and from the team side, but you know he has been internalizing and visualizing and planning on and getting ready for a start. You also know that he knows how to do that. He knows how to prepare himself.

“I guess the feeling on the coaching side is he’s in as good as place as he can be and you could hope a player would be. He has hindsight, he has some experience certainly in this. He plays a very passionate game, so he gets the start.”

Meanwhile, COVID capacity restrictions in Ontario will force tonight’s game at Canadian Tire Centre to be played in front no fans.

The Sabres, of course, played in empty rinks or before very small crowds all of last year. This will be their first game in front of no fans this season.

“It’s something we haven’t experienced for quite a while,” Granato said. “We talk about it as coaches, even last night I mentioned it, even though there was only a small crowd (in Buffalo), it seems the smaller crowds you really feel the passion of people that get to the rink. They want to be there, they’re determined to get to those games, and you feel that energy.

“With nobody in the building, you just hear the music echoing, it is a different feel, it’s totally different. It’s a big adjustment, I think, for all teams. I know for us, when we got back to the buildings that had that vibrance of fans and crowd noise, it was something we had to get reacclimated to and control momentum and deal with that crowd noise. So it’ll be odd, probably a little bit surreal.”