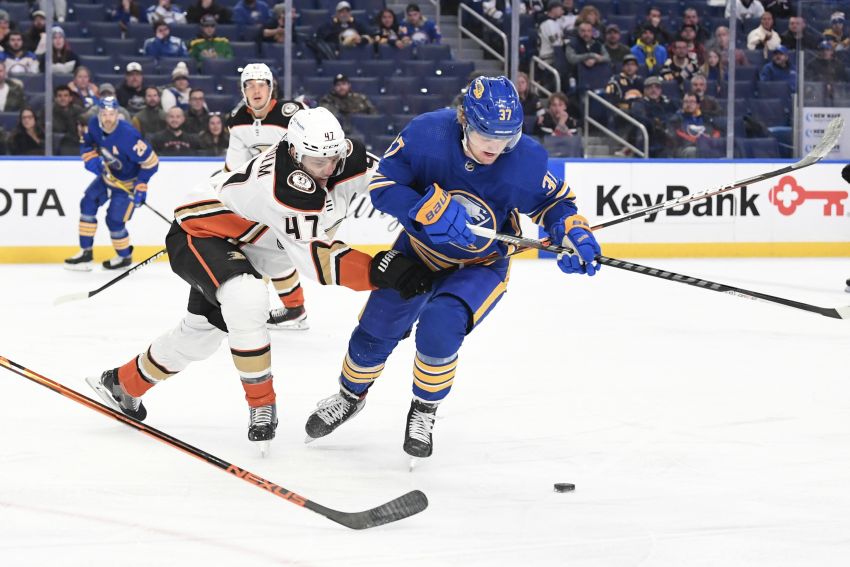 “We want to make sure we’re doing the right things with that,” Granato said on a Zoom call this afternoon from T-Mobile Arena.

Mittelstadt, 23, has suffered two upper-body injuries this season, limiting him to just seven games after he earned the No. 1 center job out of training camp.

In other lineup news, Granato said center Tage Thompson, who missed Sunday’s game with an undisclosed injury, will return tonight. Thompson, 24, was injured early in Saturday’s 3-1 win over the Arizona Coyotes but finished the game.

Granato said one unnamed player must come out of the lineup.

Krebs and Tuch, two pieces the Sabres received Nov. 4 in the blockbuster Jack Eichel trade, have never faced their old team. Eakin, meanwhile, played against Vegas in Winnipeg while a member of the Jets two years ago.

Naturally, the night will be special. Eakin and Krebs joined the Golden Knights in their inaugural season when they stunned the sports world by reaching the Stanley Cup final.

“I was looking forward to this date definitely coming back into the city that pretty much started my NHL career,” Tuch told reporters this afternoon in Vegas. “I really enjoyed my time here and Kelly (McCrimmon) and George (McPhee) were the ones who traded for me and I’m so thankful that they gave me the opportunity to play not only in the NHL but in front of a crowd and fans in a city like this. It’s something I’ll never take for granted and you know what, it was a really good time in my life.

“Now I started a new chapter but it was a date that I circled on my calendar and I was excited to play in this because I think it’s not only a big game for me, but I think it’s a big game for our organization. Obviously, it was a bigger trade. Buffalo traded away their former captain so that’s never a small trade when that happens, especially a player like Jack, unbelievable talent.”

Krebs said he would remember the game forever.

“But at the same time, I’m just excited to show ’em why, I guess, you’re a great player,” Krebs told reporters.

“We were all nervous for him,” Granato said. “His body after the game felt like he played a game but nothing with respect to the injury, which was extremely positive, the injury that he’s dealt with. So very good news, his normal soreness after a game. And I think you guys noticed, he was pretty excited that he got through the game. He was happy, felt back to normal.”