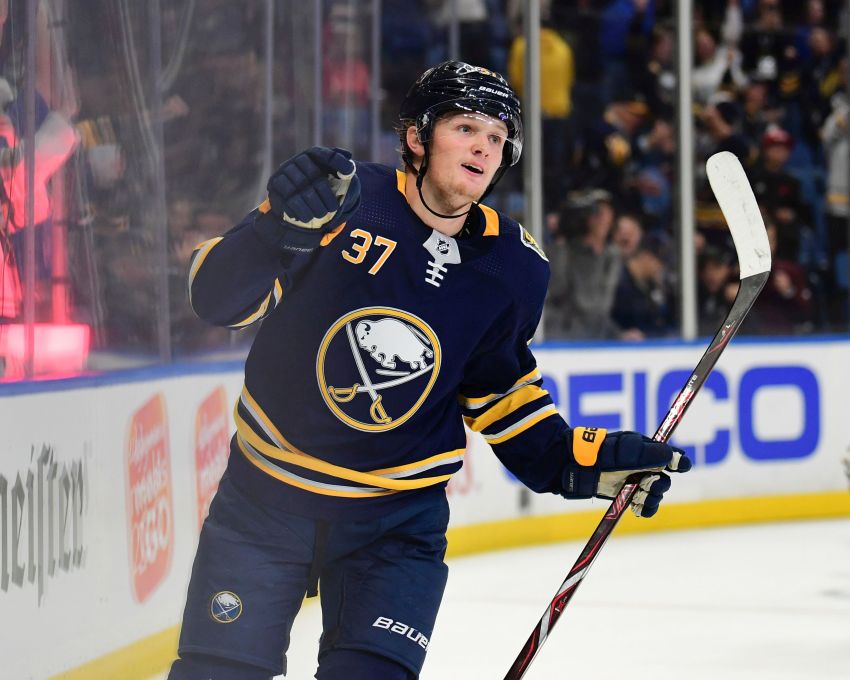 BUFFALO – The Sabres’ torrid start has created lineup stability not felt in these parts in a long time.

Through nine games, the 7-1-1 Sabres have dressed just 21 players, only making one change – Evan Rodrigues for winger Conor Sheary – when an injury forced them.

The lineup has essentially remained intact all season entering tonight’s home game against the San Jose Sharks, right down to the same lines and defense pairs.

Health, of course, has helped the Sabres. But coach Ralph Krueger has understandably been reluctant to mess with what has worked so well.

“If we can get a goal or two in a game, I think it’s a big difference for our team,” said Vesey, who said the line can be an “X-factor.”

“It took me a little bit, so it was a bit of relief,” Mittelstadt said of his first goal.

“We got all four lines that have been very stable in terms of combinations,” Vesey said. “We stayed patient and we’re finally getting rewarded.”

The Sabres have remained patient with Mittelstadt. While the former eighth overall pick possesses oodles of talent, he has often looked raw through his first 92 NHL games, especially defensively.

So it’s notable Krueger said the genesis of Mittelstadt’s recent scoring surge is the comfort he has developed defensively in the Sabres’ new system.

“He needed some time to understand that part of the game and he spent a lot of time on it,” Krueger said. “He’s worked really hard at it. He’s been coached off the ice, he’s taken a lot of video sessions on, and I think that now he’s understanding that that doesn’t take away from his time on the puck and what he needs to do offensively.

“He’s able to manage that switch in his head really well. Using his size, using his body, he’s positioning himself defensively better, which also creates some forechecking pressure.”

Mittelstadt said the defensive side has “slowed down quite a bit” for him.

“The system we play too is a little bit more aggressive,” he said. “It’s easier for me to read. I know … it works for me well.”

It’s no coincidence Sheary’s return from his upper-body injury Thursday boosted the line. After his goal opening night, the trio went six games without producing a goal.

But the line started improving with Rodrigues two games before Sheary returned, posting club-best Corsi For totals – the percentage of shot attempts by the team while the line is on the ice five-on-five – in back-to-back games, according to NaturalStatTrick.com.

After generating a Corsi For of 50% on Oct. 11 against the Florida Panthers, the line compiled a gaudy 80% last Monday versus the Dallas Stars.

“Probably starting with the Florida game we had the puck more,” Vesey said. “It seems like every game we’re having time in the other team’s end. I think all three of us are capable enough to make plays at that end and finish, and we’ve done that the last couple games now.

“It’s definitely a good feeling. Kind of a tough start, but I’m happy that the coaches kind of let us figure it out and get ourselves going. I think we can be an important line for the team.”

One thought on “Sabres’ Casey Mittelstadt, linemates starting to score after slow start”