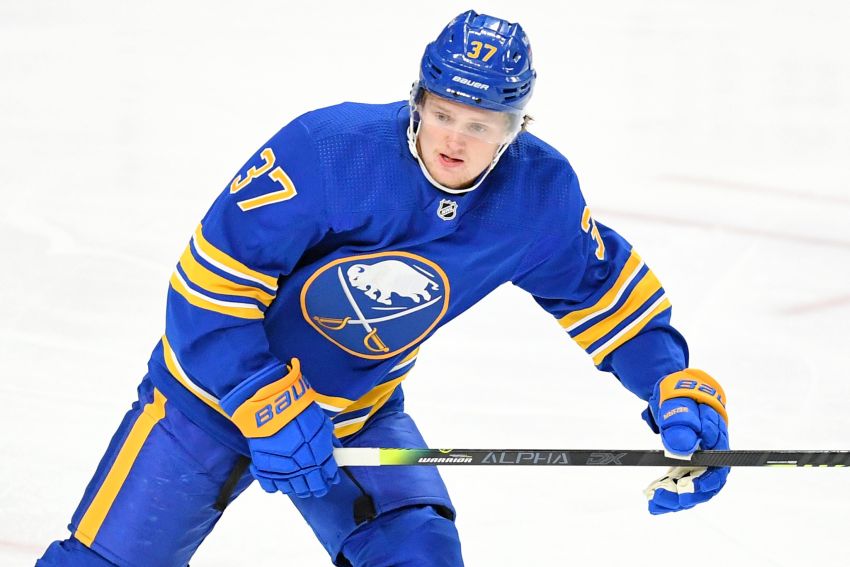 BUFFALO – Casey Mittelstadt likes to extract positives from difficult experiences. So the Sabres forward believes a trying, injury-riddled season in which he has missed 42 games and scored just four goals has also featured personal growth.

Recovering from two upper-body injuries has helped him develop patience – “That’s probably one of the things I struggled with most, I’m pretty impatient,” he said – and evolve as a person.

Mittelstadt, 23, had to do something with all his extra time at home, right? So he said he started cleaning his place and doing laundry.

“Sometimes it comes out of boredom, but just getting better habits away from the rink (are positives), and I’ve had a lot of time to kind of work on that,” Mittelstadt said of his homemaking skills following Tuesday’s practice at LECOM Harborcenter. “So there’s positives to come out of it. I think the biggest positive for me is it’s going to give me some motivation going into this summer to get right and get ready for next year.”

Mittelstadt arrived at training camp seven months ago hellbent on making an impact, and following a strong finish a year ago, he earned the No. 1 center job, a gig that lasted barely one period.

His difficult season has been well-documented. He suffered an upper-body injury opening night and missed 21 games. After returning Dec. 2, he played three times before suffering another upper-body injury for which he underwent surgery.

Following a 16-game absence, he came back too early, and after just three appearances he was forced to leave the lineup for another five games.

Slowly, the American has started feeling more like himself.

“There’s times maybe right when I came back I would kind of rush a play or rush the puck a little bit,” said Mittelstadt, who has compiled 17 points and a minus-13 rating in 36 games this season. “Now I find that I seem to be hanging onto it a little bit more and finding players, whether it’s in the D-zone, neutral zone or offensive zone.

“I think that’s the biggest thing, just trying to hand it off with a better play than you had it and go from there.”

But after missing so much time, it has been difficult for Mittelstadt to find a groove. Much like Sabres winger Victor Olofsson, who struggled after returning from a wrist injury, Mittelstadt was playing before he was truly 100 percent.

Mittelstadt has mustered just one assist in his last six outings. He enjoyed his best stretch this season in late March and early April, registering two goals and 10 points over a 10-game stretch.

“Like we talked about with Victor Olofsson, I sat here for 30 games and you guys were wondering why he wasn’t scoring,” Sabres coach Don Granato said. “You know as a coach, he’s not back to normal but he’s playing in NHL games. I think the same is going to happen with Casey. We’re not seeing the true Casey Mittelstadt; we’re seeing him push through the ripple effect of a long injury, and I think he’s doing a spectacular job in that.

“I’ve shifted him around, the first 10 games I didn’t have him on the first power play. He was exceptional with that. He knows and trusts that it’s a bit of a process, and he knows and we know as coaches that he’s going to keep getting to another level each and every day.”

For Sunday afternoon’s 5-3 road win over the Philadelphia Flyers, Granato shifted Mittelstadt to left wing beside center Peyton Krebs and Alex Tuch, a spot he practiced in Wednesday.

“These guys all have enough skill to play each position, and there’s enough intrigue with Casey on the wing and with Casey in the middle and vice versa,” Granato said. “So we’re going to keep that moving.”

Granato said defenseman Mattias Samuelsson, who has missed the last two days of practice for a family matter, will meet the team in New Jersey. Meanwhile, winger Kyle Okposo practiced Wednesday after having a maintenance day.