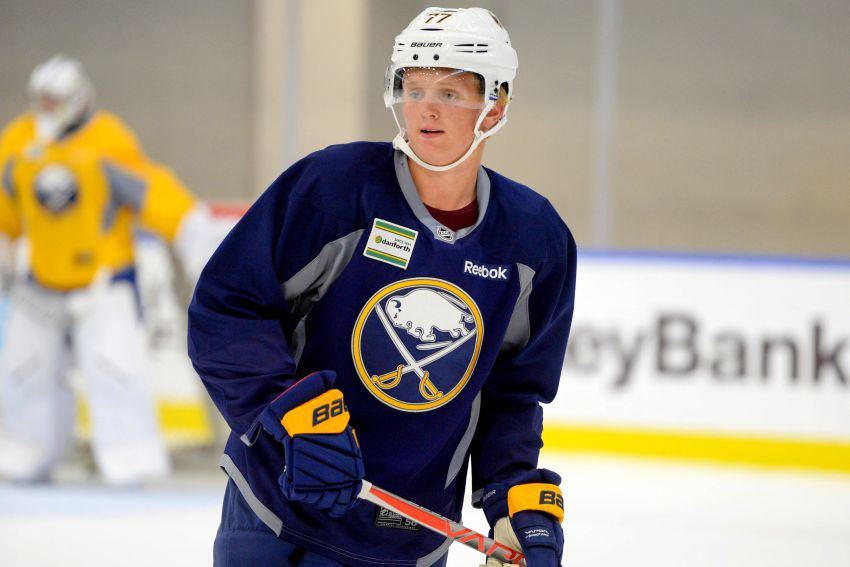 Then in the second week of April, everything stopped. When the season ended, Mittelstadt quickly became bored.

“You go from 100 mph to literally zero,” Mittelstadt said prior to Wednesday’s 4-3 preseason overtime win against the Columbus Blue Jackets’ junior varsity squad. “I think the weirdest thing for me was just kind of working out and skating and having the whole day when you’re done with that.”

Luckily for Mittelstadt, his local golf course in Minnesota opened.

Mittelstadt golfed a lot – “Six times a week at least,” he said – before more boredom set in.

“You start itching to get back and play again,” said Mittelstadt, who compiled 12 goals, 25 points and a minus-19 rating last season.

The 6-foot-1, 199-pound Mittelstadt needed to recharge following a draining season. He hadn’t played more than 47 games since 2013-14, when he scored 90 goals in 60 outings in bantam hockey.

“I’d probably be lying if I said I wasn’t a little (exhausted),” he said of how he felt after the season.

In another era, Mittelstadt, the eighth overall pick in 2017, likely would’ve been playing college or AHL hockey last season.

But these days, youngsters with Mittelstadt’s talents – he possesses ultra-soft hands and supreme vision, for example – often crack the NHL right away.

Mittelstadt struggled at times last season. Early in the year, he scored one goal in a 19-game stretch. The defensive side of his game was often suspect. On Wednesday, he lost a battle to Nathan Gerbe in the neutral zone before the former Sabres winger scored.

The five points Mittelstadt scored in his first six NHL games after leaving the University of Minnesota in March 2018 probably raised expectations too high.

He clearly wasn’t ready to fill the massive void the Sabres created by trading Ryan O’Reilly, their former second-line center.

Right now, it looks like Mittelstadt won’t assume that role early this season.

When the Sabres signed Marcus Johansson, he said he hadn’t spoken to the team much about shifting back to center. While Johansson played there as a rookie in 2010-11, he has spent the bulk of his time as a winger.

But a dearth of talent down the middle has forced Sabres coach Ralph Krueger to examine Johansson, 28, as his No. 2 center this preseason.

On Wednesday, Johansson, who scored 1:36 into overtime, centered Jeff Skinner and Evan Rodrigues.

Early in training camp, Mittelstadt struggled to grasp Krueger’s aggressive new system, which demands responsibility away from the puck.

“For young players, it will take a little bit away from their offense as they grow into that understanding,” Krueger said. “But the offense will follow.”

“Casey’s game has calmed down,” he said. “In the beginning, he was trying really, really hard and there were spurts in and out of what he wanted to be. …

“His confidence has gone up and his game has improved.”

Mittelstadt said the system is “a lot of reads and reaction.”

“I’m an aggressive player,” he said. “I like to play forward and play offense. I feel like it fits me as a player.”

Krueger called the Sabres’ win “not a pretty one.”

Gerbe’s second goal of the night 18:04 into the third period tied the game at 3.

The Blue Jackets recalled nine players from the Cleveland Monsters, their AHL affiliate, on Wednesday.

Olofsson’s third goal of the preseason 9:57 into the third period put the Sabres up.

The Sabres, who dressed most of their regulars Wednesday, are 3-2 this preseason.

Following the game, Krueger hinted Olofsson could start the season beside Reinhart and center Jack Eichel on the top line.

“We’re looking forward to seeing that group jell and grow,” Krueger said of Olofsson on the Eichel line. “But Sam and Jack just feed off each other. There’s an instinct there, there’s a synergy off of the last year that we continue to build on.

“We’d like to see that develop with Skins and Johansson, that we get a couple lines going.”