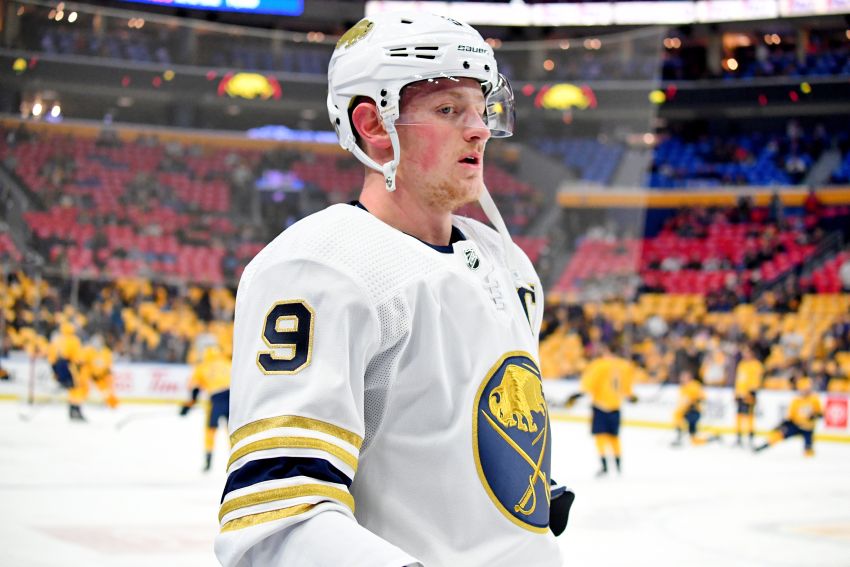 Jack Eichel has been piling up points. ©2019, Micheline Veluvolu

BUFFALO – If you ask Sabres captain Jack Eichel about his recent scoring exploits, he usually starts talking about his linemates or the rest of the team.

Eichel, 23, doesn’t want his success to overshadow the Sabres, so the ultra-talented center will heap praise on his wingers, Victor Olofsson and Sam Reinhart, and others.

“It’s tough to pinpoint one thing,” Eichel responded when asked how he has elevated his game over the last month. “The group’s been playing well.”

Right now, probably no one in the world is playing better than Eichel, who has a 17-game point streak entering tonight’s road contest against the Philadelphia Flyers.

The streak, the NHL’s longest this season, is one game shy of the franchise record the legendary Gilbert Perreault set early in the 1971-72 season. Eichel tied another Hall of Famer, Dave Andreychuk, on Tuesday.

Eichel started his streak in grand fashion Nov. 16 against the Ottawa Senators, scoring every goal in a 4-0 win.

Overall, Eichel has compiled 16 goals and 31 points while pumping a 67 shots on goal during his run. No one else had scored more than 13 goals or 25 points in that stretch entering Wednesday’s games.

Greatness, of course, was predicted for Eichel long before the Sabres drafted him second overall in 2015. So was this kind of torrid production.

The American has already scored 24 goals and 50 points in 35 games, putting him on pace for 56 goals and 117 points. With the Sabres standing in second place in the Atlantic Division after years of futility, he’s a legitimate Hart Trophy candidate as league MVP.

Naturally, growth was expected. Thirty-five or so goals and 90 or more points seemed very possible if he stayed healthy this season.

But Eichel, a two-time NHL All-Star, has reached an entirely new level. He’s starting to look like a superstar.

“He’s maturing,” Sabres coach Ralph Krueger said. “I mean, he went through four years in the National Hockey League, and I think the pain from last year was a big test of where his career was going to go. He has processed it like a winner, and in that adversity grew and he made a lot of decisions through the summer in the conversations we were having that showed that winner within him.”

What has changed in the past month? A lot.

Eichel, who possesses a lethal shot, is utilizing it more often. Following his four-goal night, he said his friend and former Sabres teammate, Matt Moulson, told him he wasn’t shooting enough.

“One of the biggest things is that he’s decided to shoot the puck more often,” said a scout who has watched Eichel regularly this season and throughout his career. “He is shooting more than passing. He has such an excellent shot. It’s an elite shot and an elite release. He gets it away very quickly and it’s very accurate. That is deadly.”

Eichel, who registered 61 shots in the first 18 games this season, is on pace for his second consecutive 300-shot campaign.

“I’m just trying to put more of an emphasis on my defensive game and being more responsible,” Eichel said. “I think through that I’ve had a little bit more success with the puck and offensively.”

The scout said Eichel “seems to be more committed to be playing a 200-foot game.” That helps give him more space to gain speed before the neutral zone.

“As much as the points and production’s great, you’re seeing him, going back to the St. Louis game (Dec. 10), protecting a one-goal lead,” Sabres general manager Jason Botterill said. “He’s taking the faceoff at the end of the game and trying to protect that one-goal lead and help us win the game.

“In all aspects of the game, he’s playing outstanding.”

So is Olofsson, a rookie whose shot ranks among the NHL’s best. The Swede has drawn attention away from Eichel. The two have played together most of the season at even strength and the power play.

“(He has) also benefited from having Olofsson on the power play because teams cannot key on Eichel all the time,” the scout said. “They have to be aware of Olofsson as well.”