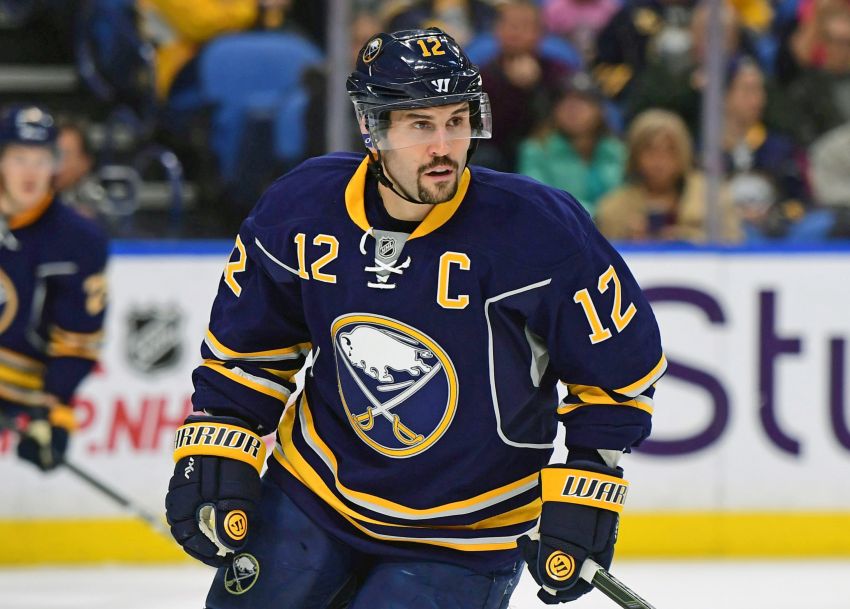 BUFFALO – Sabres coach Dan Bylsma can’t tell you how old Brian Gionta is, which illustrates how much he cares about his captain’s age.

“I don’t even know,” Bylsma said Thursday after the Sabres prepared for tonight’s tilt against the New York Islanders at KeyBank Center.

Gionta, for the record, is 37 years old, an advanced age when most NHL players are long retired, or, at best, reduced to a bit role.

Occasionally, winger Marcus Foligno will tease Gionta, his friend and linemate – “You call him ‘dad’ or whatever here or there,” he said – about his age.

“I don’t know if he likes it too much,” Foligno joked inside HarborCenter.

But, Foligno said, Gionta “has the last laugh.”

The diminutive Gionta is still thriving 952 games into his career.

“I take pride in getting myself ready, trying to be as consistent a player as I can,” said Gionta, who has scored twice in the last three games.

Gionta’s seven goals – all have come at even strength – are tied for second on the Sabres. His 12 points are tied for fifth. Gionta has averaged 17 minutes, 11 seconds of ice time through 28 games – the team’s sixth-highest total among forwards.

“At times, regardless of age, he’s leading the way with how we want to play and how we work,” Bylsma said. “I don’t put ages on that. It could be for as long as he’s going to do it that way, he can chase (Jaromir) Jagr down for the oldest guy in the league.”

Still, Gionta, a free agent after the season, has no plans to retire.

Gionta hasn’t changed his style much, either. The right winger has been a smart, speedy presence beside Foligno and center Johan Larsson all season.

The Sabres’ most consistent and reliable line in years – Bylsma put it together last winter – is technically a checking trio, although it has also combined to score 16 goals.

“The stability’s huge,” Gionta said of his line. “You get a comfort level, you know where guys are. You know how each other plays. You know where your support’s going to be. It just takes all the guesswork out of it.”

Gionta, who scored 12 times last year after a slow start, hit the 20-goal mark seven straight seasons earlier in his career, the last coming in 2010-11.

“How many did you peg him for at the beginning of the year?” Bylsma asked. “I’m not surprised at him being able to get that number of goals with the way his line played … not only checking, but playing in the offensive zone.”

Twenty goals would be a significant achievement. A Sabre Gionta’s age hasn’t hit that mark since Dave Andreychuk, who was 37 in 2000-01. According to local stat researcher Mike Haim, the oldest 20-goal scorer in franchise history is Don Marshall, who was 38 most of the Sabres’ first season in 1970-71.

If Gionta, who’s in the final season of a three-year, $12.75 million contract, finishes strongly, the Sabres would likely re-sign him for a 16th campaign.

Gionta said he thinks about his future “all the time.”

“I’m not quite sure what it holds, but I guess the exciting part is you enjoy the ride and when it’s over, you change the page and go from there,” he said.

Foligno believes Gionta can play at least three more seasons. The Sabres haven’t had a 40-year-old since Teppo Numminen in 2008-09.

“I hope he has a lot more years to go,” Foligno said. “It’s been great playing with him. He simplifies the game for myself and Larsson.”

Then Gionta was parked in front of the net on Falk's shot for the lead. pic.twitter.com/DRuZ0oSu54