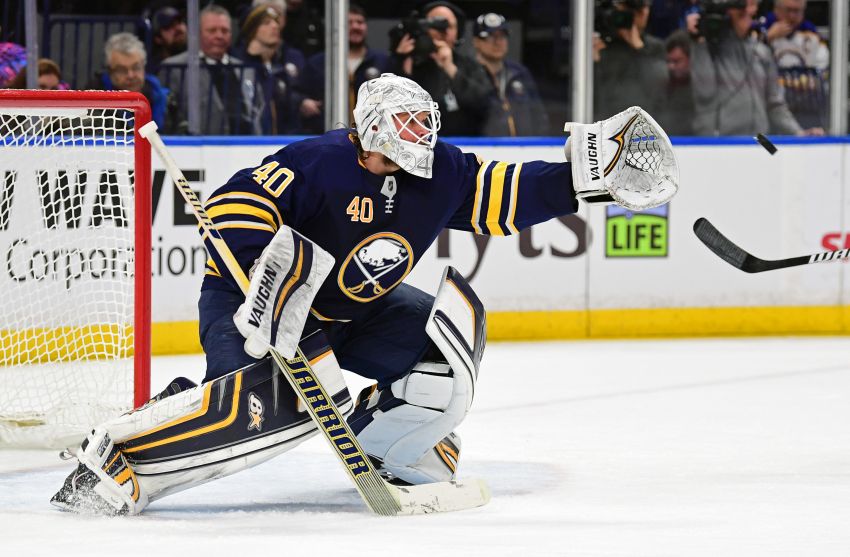 BUFFALO – In Robin Lehner’s 13 appearances at home, the goalie has morphed into the Sabres’ only consistent presence, providing the feeble club a chance to win most nights.

Lehner has performed splendidly at KeyBank Center this season, compiling a 1.94 goals against average (No. 1 at home in the NHL) and a .935 save percentage (tied for first).

But the hapless Sabres own the NHL’s worst offense, averaging 2.1 goals a game. Incredibly, they’re even more anemic with Lehner backstopping them at home.

After Tuesday’s 3-0 loss before 17,811, a game in which the Boston Bruins scored two empty-net goals, the Sabres have scored 17 times in Lehner’s 11 home starts.

That’s a pathetic 1.5 goals a contest. No wonder Lehner has four home wins all season.

“(He’s) been there all year for us,” Sabres winger Benoit Pouliot said. “He stands on his head, works hard. He’s just keeping us in games when we’re struggling. We can’t even find a way to give it back to him and get two points.”

Lehner, of course, has no margin for error. Tuesday marked the third time the Sabres have scored zero goals for him at home.

“I’m not trying to worry about anything else other than my game,” Lehner said. “My job is to save the pucks and that’s pretty much it.”

Lehner stopped 30 shots against the Bruins, only allowing a wicked Jake DeBrusk snipe from the right circle in under the crossbar 10:14 into the second period.

“He challenges our D (Marco Scandella) and he beats us both,” Lehner said. “It was a good shot.”

The Sabres actually generated chances, pumping 17 of their 36 shots on Bruins goalie Anton Khudobin in the first period.

Incredibly, the Sabres have scored 15 first-period goals all season.

“We’ve had really good starts recently, we came out (tonight), really liked the pace we were playing with and the speed and the execution,” Sabres coach Phil Housley said. “I can’t explain it, we had opportunities to score.”

After that scoreless period, the Sabres, like so many other times this season, deviated from what made them successful.

“Every time we sort of trend in a right direction … we get away from the things we did well,” Housley said. “In the first period, you saw the execution was there, the decisions were there, the simple game was there. OK, we didn’t score, but it’s not a time now going into the second period where you change. You got to stick to the game plan and eventually you’ll break through.

“It just seems that sometimes we’re taking things into our own hands and it just keeps coming back at us. We got to realize if we just stay with the course of our game plan, eventually it’ll break. You’ll get a good bounce, you’ll get a shot off the shin pad. …

The Bruins, meanwhile, stuck to their game plan and stayed true to their structure, Housley said.

“They’re not doing anything fancy,” he said.

Most teams trailing by a goal late in the game swarm late and push for the tying goal. The Sabres, however, fell meekly to the Bruins, who played at home Monday.

“In the third, on the road, in a back-to-back, usually a team’s going to have a push, and I don’t want to be disrespectful, I don’t know if they had a true sustained push,” Bruins coach Bruce Cassidy said. “They had some shifts in our end, but I thought we managed the game very well in the third, and if anything, had the better opportunities.”