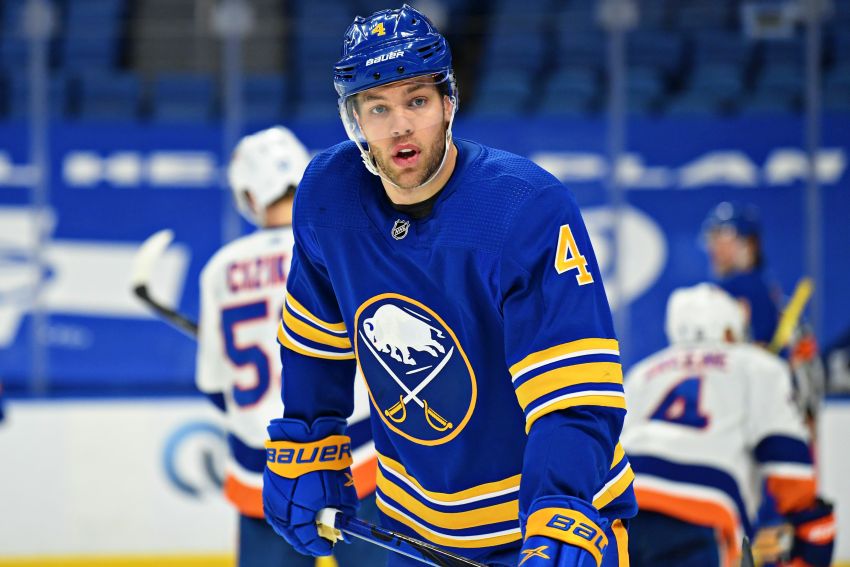 BUFFALO – Barely 20 seconds after the Sabres fell behind 2-0 early Tuesday, winger Taylor Hall roared in on goalie Ilya Sorokin with an opportunity to ignite himself and his reeling team.

Hall has struggled to score this season, registering just one goal way back on opening night. The Sabres desperately need the 2017-18 NHL MVP to exploit a rookie in a critical moment like that breakaway.

But Sorokin, who earned his first NHL win in his fourth game, stymied Hall, keeping the Islanders up two goals inside KeyBank Center.

“It’s been a struggle for me, personally,” Hall said on a Zoom call following the Sabres’ 3-0 loss. “I know I’d love to have four or five goals right now. I feel like I’ve had some bad luck a bit. But at the same time, when you’re not scoring, you got to change something, you got to find whatever is in your game that’s not allowing you to put the puck in the net.

“Right now, it’s been tough. I can’t lie to you. If I have four or five goals right now, you don’t really know what our season looks like, especially with how close a games we had and how much we’ve been in games right until the very end.”

The Sabres have scored just five even-strength goals in their last seven outings. Hall, who hasn’t scored a five-on-five goal this season, is hardly the Sabres’ only high-paid forward mired in a slump.

– Captain Jack Eichel has scored just two goals overall and one at even strength.

– Sam Reinhart has scored only one even-strength goal and three overall.

– Victor Olofsson has registered just one of his five goals at even strength.

The list goes on. At least Olofsson can score power-play goals. The Swede tallied the Sabres’ lone goal Monday on the man advantage.

Olofsson appeared to score another power-play goal 13:01 into the third period Tuesday, narrowing the margin to 2-1. But the Islanders challenged, and replays showed Eichel was offside. The goal was disallowed.

By then, Krueger had switched up his top lines, moving Reinhart and Tage Thompson beside Eichel and Skinner back to the fourth line, a place he has spent most of the season.

“I just didn’t like the way the Eichel and Skinner line was functioning and I did like the way Tage Thompson had stepped up in his game,” Sabres coach Ralph Krueger said.

He added: “We actually liked the lineup that we played the second half with.”

Hall, who signed a one-year, $8 million contract, in part, to play for Krueger, is often the most reflective Sabres player. He said he couldn’t pinpoint why they’ve struggled to score five-on-five.

He believes considering everything the Sabres have endured this month – COVID-19 problems paused their season – and the opponent they faced, the last two days weren’t a total bust.

“There’s a lot of good things, and I know that’s probably not what people want to hear and not the spicy headline,” Hall said. “But we are doing things that a lot of times are going to win you games, and right now, we just can’t find any offensive part, and that’s all it is.

“Defensively, we’ve been strong enough to be in games. Offensively, we have one goal in the last 120 minutes.”

The Islanders had two goals in the opening 11:58 on Tuesday. After Anders Lee beat Sabres goalie Carter Hutton at 4:58, Jean-Gabriel Pageau followed.

The Sabres’ opponent has scored first nine times in 12 games this season.

“We stuck with our game better after that,” Krueger said. “Going down two again was, of course, against the Islanders, a huge mountain again to climb.”

One thought on “Sabres can’t exploit rookie goalie, get blanked by Islanders”