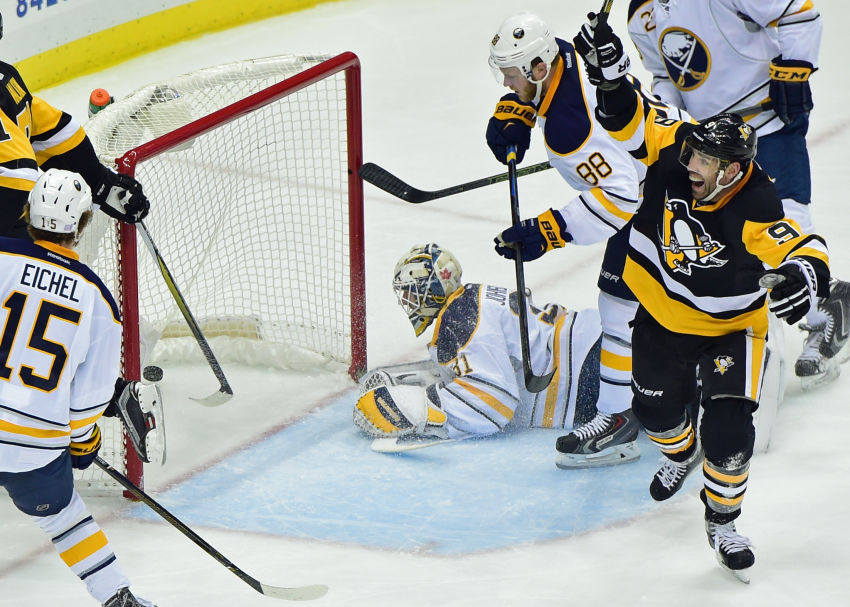 PITTSBURGH – A year or two ago, as the Buffalo Sabres rebuilt their lineup from the ground up, a game like their exciting 4-3 loss to the Penguins on Thursday would’ve turned into an utter annihilation.

But against a team that usually destroys them, the Sabres roared back from an early 2-0 deficit inside the Consol Energy Center, their personal house of horrors, tying it before the first period ended.

When the Penguins went up two goals again late, the Sabres pumped 24 of their 53 shots on net in a wild third period, putting constant pressure backup goalie Jeff Zatkoff.

“We just played,” Sabres center Ryan O’Reilly said. “We didn’t think as much.”

These days, even the Sabres’ losses can be fun to watch.

After he scored at 17:34, Matt Moulson narrowly missed the tying goal near the crease in the waning seconds with the Sabres up two skaters. Earlier in the period, Jamie McGinn’s shot stopped on the goal line.

“Even though it was a slow start, we stuck with it, and I think we’ve been in that situation before and we haven’t handled ourselves the appropriate way, responded the right way,” O’Reilly said. “That’s what we did. We came back, we started getting possession of the puck and getting it deep and shots on net.”

The Sabres, who have lost seven straight games to the Penguins, last had 53 shots on Oct. 13, 2007. They had 40 shots in their 4-3 overtime win Tuesday in Philadelphia.

The offense is primed to bust out.

Considering the Penguins had outscored the Sabres 25-3 in their previous six victories, Thursday showed some major progress. Last year, they throttled the Sabres 5-0, 6-1 and 2-0. The Sabres haven’t beaten the Penguins since a 4-2 triumph here April 23, 2013.

Back then, Sabres coach Dan Bylsma led the Penguins.

The Penguins honored their former coach in his first game back here with a stirring video during the first period. As the tribute played, the crowd of 18,415 fans roared and gave Bylsma, who won the 2009 Stanley Cup, a standing ovation. Players on both benches tap their sticks. A smiling Bylsma responded by waving to the crowd.

“It was obviously a nice welcome and a nice applause,” Bylsma said. “I was thankful.”

Was he choked up on the bench?

“I don’t know what choked up means,” he said.

Coincidence or not, the Sabres finally woke up shortly after the tribute, getting goals from McGinn and Nick Deslauriers before the period ended.

Pascal Dupuis scored 56 seconds into the game and Patric Hornqvist followed at 7:16.

“Sticking with it,” McGinn said. “You can’t get down. That’s why it’s a 60-minute game. They came out, the crowd was into it. But it’s one of those things we stuck with it.”

Ben Lovejoy put the Penguins up 3-2 in the second period before Evgeni Malkin scored the eventual winner on the power play at 14:57.

Penguins superstar Sidney Crosby, the greatest scorer of his generation, started the tilt with only three points in nine games, all of which came in one outing. The slick center assisted on both first-period goals. He now has a point in 20 of his last 21 appearances against the Sabres and 26 of his 29 career games.