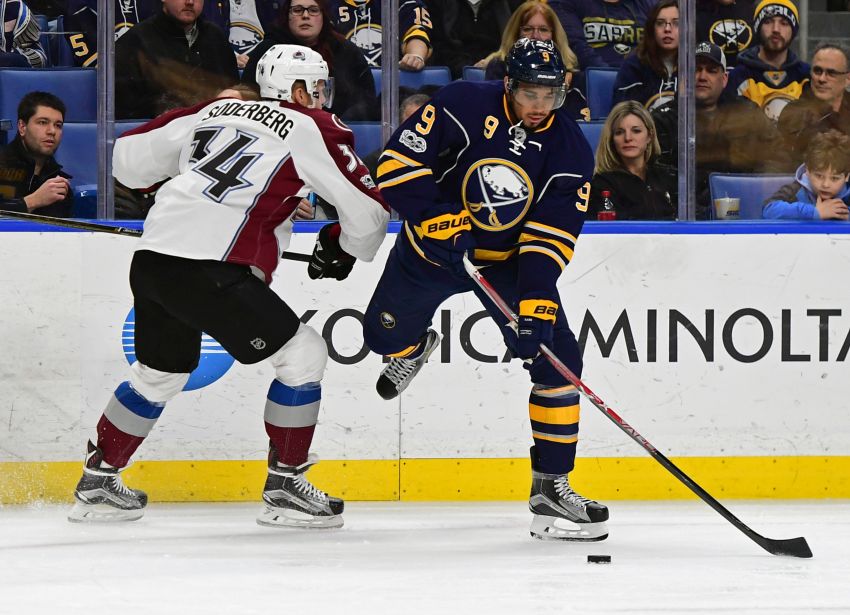 The club’s on pace to be one of the worst this century.

So it was hardly surprising the Sabres mostly had their way with the Avalanche. Still, after two periods, they had a 21-11 shot advantage but only a 1-0 lead thanks to Sam Reinhart’s power-play goal.

Colorado, which has 32 points this season, kept hanging around before the 18,335 fans inside KeyBank Center.

“It got a little scary,” Sabres coach Dan Bylsma said. “I think we had a good run of possession. We had a post here, a bounce there that didn’t go our way. After the first period, we’re talking about staying with it, staying with it, (the) game plan.”

But the Sabres needed needed put Colorado away. Imagine if they lost at home to a team with only 15 wins?

It came 15:46 into the third period, when Kane zoomed down the right wing, cut to the slot and beat Colorado goalie Calvin Pickard between the legs.

Kane continued his torrid scoring run he began Dec. 3. He has a team-high 19 goals and seven scores and 12 points in his last 12 games. He has 18 goals at even strength. Since Dec. 1, Kane leads the league in even-strength scores.

While Thursday’s tilt was boring at times, the Sabres showcased a style that will make them successful in the future.

“That’s the way we talk about playing,” Bylsma said. “That was probably the best example of it for us, for 60 minutes, is playing in the offensive zone, grinding a team down and continually doing it shift after shift.”

The victory – the Sabres have won two straight contests for the first time since a three-game streak Jan. 20-24 – moved them to within three points of idle Toronto for the second Eastern Conference wild card spot.

“It feels really good in a game in which you feel is really a must-win,” Bylsma said.

Sabres goalie Robin Lehner quietly made 23 saves for his second shutout this season. The Sabres hadn’t allowed fewer than 30 shots since Jan. 12, a 17-game stretch.

“It was kind of nice,” Lehner said. “I kind of started getting bored there in the second a little bit.”

Bylsma said: “We did a good job of letting Robin see the puck. A lot of those were in the glove or in his chest.”

The Sabres have performed terribly in the second period this season, getting outscored 63-41. But they played well Thursday, limiting the Avalanche to just four shots.

Reinhart finally opened the scoring on the power play 48 seconds into the second period, backhanding a shot between Pickard’s legs.

The Sabres earned a rare Thursday win, improving to 2-10-2. They earned their only other Thursday win on Dec. 1. Is it just a coincidence? They’re 10-3-3 on Tuesdays.

“I didn’t tell them our record on Thursday until after the game, that we finally got a win,” Bylsma said. “A little bit more like a Tuesday than a Thursday for this team.”

The Sabres lost another player to injury late in the first period when fourth-line center Derek Grant left with a shoulder injury. Bylsma said Grant left as a precaution and will undergo a CT scan today.

“He’s really shown quite a bit for a guy who is not a natural centerman, hasn’t played there in a while,” Bylsma said. “In every one of his games he’s shown his ability to play there, be responsible there, be good positionally there, manage the puck well … and still, at the same time, showing a little spurt of offensive ability when he has the puck.”