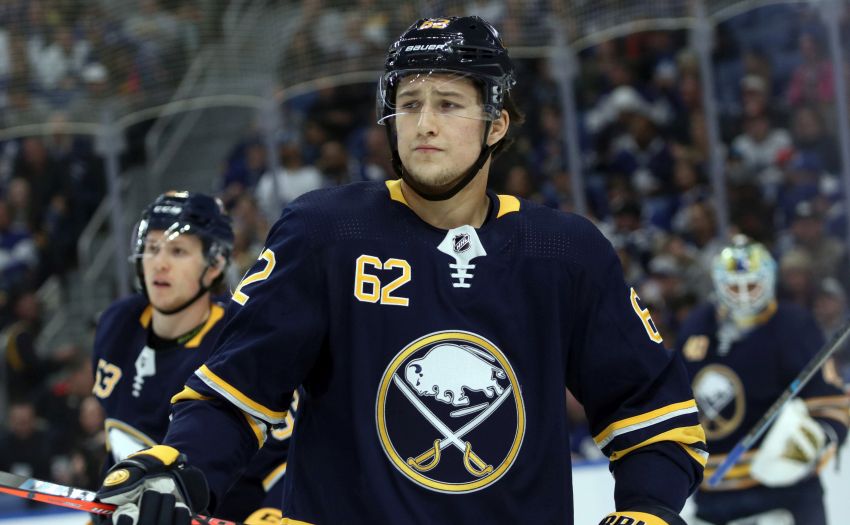 BUFFALO – For the first time this season, the Sabres have hit a rut.

At 9-3-2 overall, they’re still in terrific shape, mind you. But they’ve lost three of their last four games (1-2-1), getting outscored 14-7 by their opponents.

A day after allowing four goals in the opening 10:44 of their 6-1 loss to the Washington Capitals 6-1, the Sabres face the scorching New York Islanders.

The Sabres have utilized the same lines and defense pairs most of the season. Krueger, understandably, has been reluctant to tinker with what has worked so well.

But it wouldn’t be shocking to see him change things tonight. Krueger switched up some lines late Friday in Washington.

“I’m not going to give the lineup until tonight,” he said. “We’ve got a few things in our minds right now. We’re going to keep that close to us until tonight.”

The Sabres have responded well after losing the opening game of their first two back-to-back sets, winning the next night.

Krueger always takes positives from negative situations, and he believes a rough night like Friday’s can be a “big helper” for creating an identity.

“It’s an excellent confirmation of what we need to do,” he said. “So we’re expecting quite a reaction tonight for overall the way we played yesterday. That’s generally my approach is the really bad nights are there to use as a confirmation of habits that need to happen here to play, especially against the top teams in the National Hockey League.”

“They just have a very patient culture where they are willing to wait until you give them an opportunity,” Krueger said. “They’re as good as any team right now at playing as one. They put a lot of pressure on teams when the opportunity’s there, but they’ll wait and defend very well if it’s not.

“Offensively, they play simple, they play direct, they bring pucks to the net very quickly, aggressively. …

“It’s the perfect time to play a team that’s so well-structured and disciplined in their execution.”

Sabres defenseman Rasmus Dahlin, 19, might want to take notes watching the Islanders. The Swede struggled Friday and has often looked raw defensively this season, his second in the NHL.

The good news, of course, is the ultra-talented Dahlin is willing to listen to advice.

“He’s a very coachable player who has to go through a learning curve,” Krueger said. “It’s much more difficult to be a mature defenseman than a mature forward. It’s the pressure of the game in your own end and the opposition, like last last night against Washington, that comes at you as they’re among the best in the world, and to learn to play that side of the puck is something that gives our coaching room a purpose and a reason to be here.

“That’s our job, and we enjoy doing that with Rasmus. He’s going to come out of this one of the best defensemen in the league.”

Krueger said goalie Carter Hutton will start tonight, the Sabres’ final outing before a two-game trip to Sweden next week.