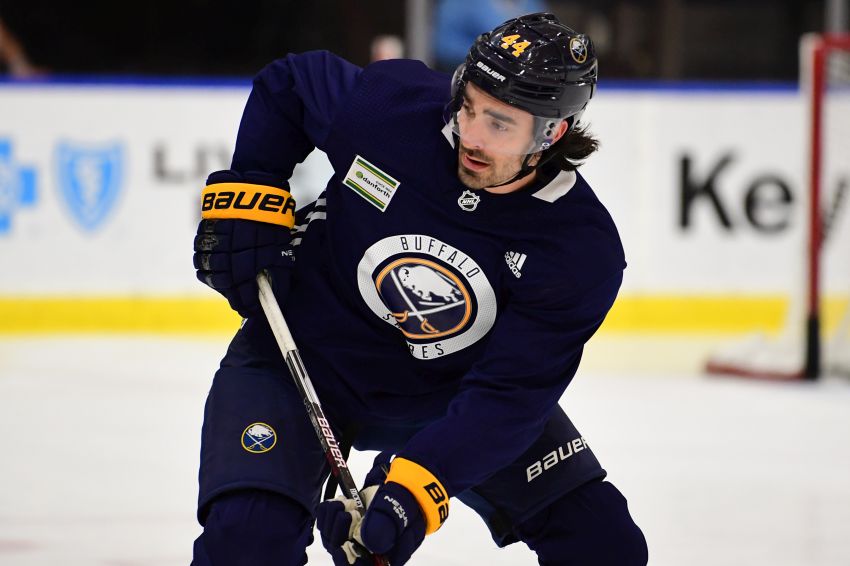 BUFFALO – Brandon Hickey attended his first development camp way back in 2014, so he knows what to expect this week at the Sabres’ annual summer prospect gathering.

This is the defenseman’s sixth camp with his third team.

“Two conferences, three time zones,” Hickey, 23, said of his travels from Calgary to Arizona to Buffalo.

While six players are older than him, Hickey’s long hair and beard make him look like the camp’s grizzled veteran.

A year ago, Hickey’s sudden presence here was intriguing. The Sabres acquired the Boston University product from the Coyotes just days before camp opened in exchange for winger Hudson Fasching.

“It was very exciting, a little bit of a whirlwind,” Hickey said following Thursday’s session inside Harborcenter.

Having earned a spot on Team Canada’s loaded World Junior Championship team in 2016 and captained BU as a senior in 2017-18, Hickey arrived with an impressive resume.

As an NCAA player four years removed from his draft, Hickey, a former third-round pick by the Flames, could’ve waited and tested free agency later in the summer.

But the 6-foot-2, 198-pound Hickey signed his entry-level contract with the Sabres. The Edmonton native received a long look during NHL training camp before they assigned him to the Rochester Americans.

“It was a challenge early on,” Hickey said of his rookie season.

Hickey couldn’t crack the Amerks’ loaded blue line, which went 10 deep at times. In only 38 AHL games last season, he compiled one goal and nine points. He sat out all three playoff contests.

Early on, Hickey said he struggled watching games as a healthy scratch.

Then, Hickey said, he “really started to study the game.”

“Try to use it to my advantage,” he said.

Hickey said the difficult experience helped him “grow as a player.”

He added: “As much as it (stinks) not playing, I think it kind of changed my mindset a little bit toward what I need to develop, how I need to develop and just my lifestyle on and off the ice.”

“I feel like since I was a younger guy, I really wasn’t as vocal with the coaching staff as I could’ve been,” Hickey said.

Hickey, who said he wants to be a two-way, puck-moving defenseman, plans to reach out to Taylor more often.

He added: “It kind opened my eyes to the way I can develop and the way I can help myself get back into the lineup, and I feel like he’s a part of that.”