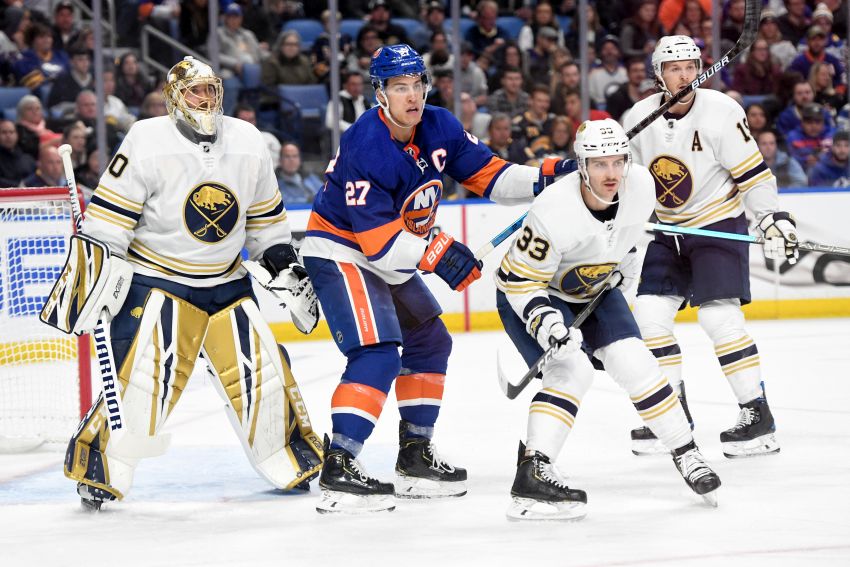 BUFFALO – Sooner or later it had to happen. Slumps are inevitable, and the Sabres, the NHL’s biggest early-season surprise, avoided one for nearly a month.

After winning nine of their first 12 games, the Sabres, having dropped four of the last five (1-3-1) games, are officially struggling.

Sure, Saturday’s setback, their final outing before their two-game trip to Sweden, wasn’t exactly an awful effort against a team that won its ninth straight game.

A night after an ugly 6-1 road loss to the Washington Capitals, the Sabres responded well, pumping 27 shots on Islanders goalie Semyon Varlamov.

“It’s closer to the kind of team we want to be,” Sabres coach Ralph Krueger said.

If Islanders winger Derick Brassard hadn’t scored a fluky goal from behind the net 5:19 into the contest, the Sabres might’ve grabbed a point or even won before the capacity crowd of 19,070.

“We played more the way we wanted to and just couldn’t get the puck in the net,” center Marcus Johansson said following the Sabres’ first regulation loss at KeyBank Center.

Eichel, who was visibly frustrated following the game, liked how the Sabres bounced back after Friday’s dreadful effort.

“It’s 1-0, it’s not like we just played a poor team game and they outplayed us,” he said after the first time an opponent shut out the Sabres this season. “I didn’t see it that way. I thought we came back after maybe our worst game of the year (Friday) put a lot on them. …

“You can talk about their defense, what they do, obviously they make it tough. It’s not easy. They’re one of the best defensive teams in the league for a reason, but we had our chances.”

Brassard scored the game’s only goal when his pass deflected off Sabres defenseman Colin Miller.

“I’m on my post and he goes to center it, and it hits off Miller and it redirects off the top of my pad and in,” Hutton said. “Just kind of I’m going to look out into the slot, it redirects and bounces in. Obviously, an unfortunate break.”

The Sabres, who leave for Sweden today, have a four-day break before playing the Tampa Bay Lightning on Friday and Saturday in Stockholm.

The opportunity to bond overseas, Eichel said, will be a special experience.

“It’s great for us to be able to get on the road together, just continue to get closer as a group off the ice,” he said. “This is a really unique experience that not a lot of teams get to do. For us, it’s really cool. We’ve got a lot of guys from Sweden and a (five) guys from Finland, a coach with some European background (Mike Bales).

“I think it’s going to be an awesome experience for us. It’s going to get us an opportunity to spend a lot of time together, play some games in an atmosphere we’re probably not used to, and something we’ll remember for the rest of our lives.”