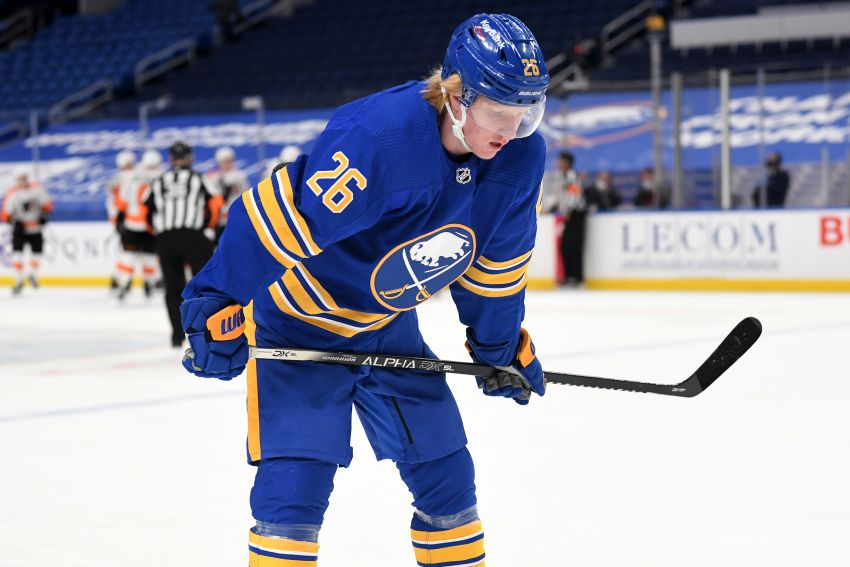 BUFFALO – After 34 days, more than 1,000 minutes of hockey and one coaching change, it appeared the Sabres would finally halt their winless skid Monday.

Instead, they suffered the most gut-wrenching loss of their 18-game streak, blowing a 3-0 third-period lead and falling to the Philadelphia Flyers 4-3 in overtime inside KeyBank Center.

Good grief. What happened late? How did the Sabres suddenly start chasing the game after dominating it for 40 minutes?

“Panic attack,” Sabres defenseman Rasmus Dahlin said on a Zoom call. “We haven’t been in this situation, we got panicked, the puck bounces their way and I don’t know.”

As the Sabres began imploding, it felt like only a matter of time before the Flyers roared back and tied it.

With Flyers goalie Brian Elliott off for the extra attacker, Sean Couturier tied it at 18:31. Ivan Provorov scored the winner 42 seconds into the overtime.

Right now, the Sabres are so fragile defenseman Brandon Montour said when Kevin Hayes scored the Flyers’ first goal 1:50 into the third period, a feeling of “Here we go” swept over the team.

Claude Giroux scored the Flyers’ other goal at 10:51, giving them more life.

“Every time the opposing team scores a goal it’s the same way,” said a dismayed Montour, whose goal 12:43 into the second period put the Sabres up 3-0.

He added: “I don’t know if the mood keeps cycling through our team here. Yeah, it’s 3-2, but you still got the lead, you know?

Montour said blame should be put squarely on the players on the ice.

“I know this whole stretch is embarrassing, but especially tonight, any team in the NHL, I don’t care who you are, that’s a win,” he said.

At least the Sabres are inching closer to that elusive victory under interim coach Don Granato. In Saturday afternoon’s 3-2 loss to the Boston Bruins, they led 2-1 entering the third period before wilting late.

“You’ve seen the energy, you’ve seen the jump and how positive those periods are,” Montour said. “In Boston we gave a good run there. Tonight, the first 40. But the third period, like, you just got to be desperate, and guys, I don’t know if they try to feel sorry for each other. … You just have to find a way there. That’s unacceptable.”

Granato refused to talk about the Sabres’ wretched stretch over the past five weeks.

Sabres defenseman Henri Jokiharju scored 17:41 into the game before center Cody Eakin’s second goal this season and first past a goalie made it 2-0 into the second period.

When Montour scored, it felt like the NHL’s laughingstock, which hasn’t won since Feb. 23, might finally pull one out. No. 1 goalie Linus Ullmark, who returned from his lower-body injury Saturday, and a commanding lead felt like two much for the Flyers.

But a pride factor clearly ignited the Bruins and Flyers, who had lost nine of their last 12 games. They don’t want to lose to the Sabres and be the team that ends their dubious streak.

Sabres rookie center Dylan Cozens suffered what appeared to be a left arm injury and left the game after Philippe Myers checked him into the left boards deep in the Philadelphia zone 11:43 into the first period.

Granato did not have an update after the game.

One thought on “Sabres blow three-goal lead, lose in OT to Flyers: ‘This … is embarrassing’”