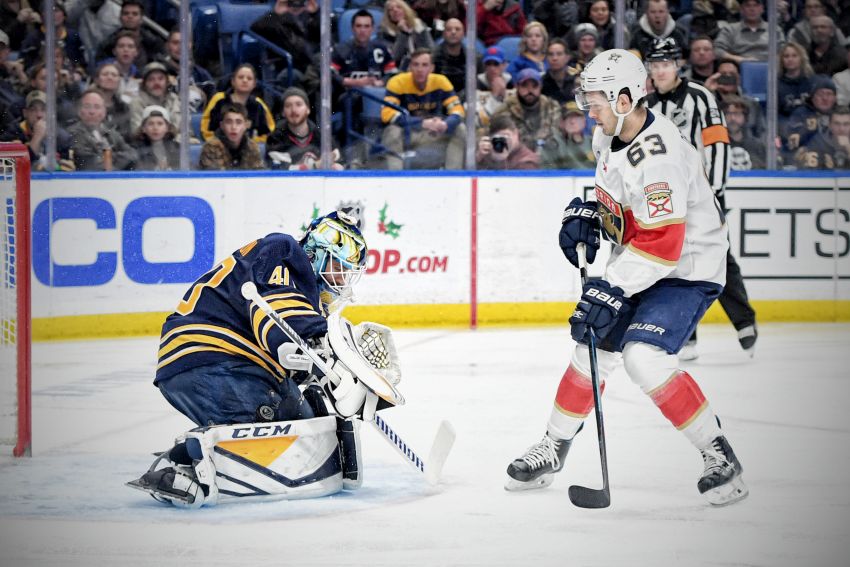 BUFFALO – Having earned 20 of a possible 22 points when leading after two periods entering Tuesday, the odds of the Sabres imploding against the last-place Florida Panthers seemed slim.

Ten weeks into the season, the Sabres had zero regulation losses – a terrific 9-0-2 mark – when up after 40 minutes.

So Tuesday’s 5-2 setback to the Panthers, a game the Sabres led 2-1 at the beginning of the third period, might be their most shocking loss of the season.

The Sabres completely fell apart early in the third period, allowing the Panthers to score three times in a span of 3:44 to go up 4-2 by 4:42 mark.

“We have an opportunity to close things out and it didn’t happen,” coach Phil Housley said of the scoring opportunities the Sabres couldn’t convert. “So we have to feel comfortable in that position. We don’t have to do anything special, take what the game gives us.”

Instead, the Sabres played perhaps their worst five minutes all season, leaving the crowd of 17,603 inside KeyBank Center stunned.

“We lost sight of our game maybe a bit there,” Sabres captain Jack Eichel said. “All of a sudden, you’re down a few goals. It just seems like we lost momentum. It’s frustrating, we’re at home, we’ve got to find a way to have a better third period than that.”

Incredibly, the Panthers have won seven straight games over the Sabres, their longest streak since entering the NHL in 1993.

To make matters worse, the Sabres lost winger Jason Pominville about six minutes into the third period when teammate Rasmus Ristolainen accidentally flattened him during a line change.

The defenseman is five inches taller and 35 points heavier than Pominville, who was racing out on the ice.

Housley had no update on Pominville, who was helped off the ice and looked woozy going to the dressing room.

By then, the Sabres were finished.

Housley warned Tuesday morning the Panthers, who must make a playoff push soon, would be desperate.

“I don’t think our desperation was there,” Eichel said. “They were definitely desperate. They played hard in their end, but I don’t think we outworked them. Give them credit, they played a really good third period. We weren’t good enough.

“They definitely stay back in the neutral zone and waited for us to turn it over. I thought we at times mismanaged the puck a bit, and there it is.”

Skinner added: “We had a good start but (we need) just a little more desperation in our game in the third. I think you just sort of saw it coming as the game went along. The goalie made some big saves and we’re sort of looking for that bounce when I think we should’ve been going after it and trying to sort of create it for ourselves.”

Skinner connected on Eichel’s feed 3:48 into the game, scoring his team-best 25th goal. After Troy Brouwer tied it in the second, Ristolainen put the Sabres back up later in the period.

Then things got feisty. Florida’s Keith Yandle thought Skinner slew-footed Barkov in the corner – it appeared he just fell – so he jumped the sniper and threw him to the ice, earning only a roughing call.

“I was kind of surprised,” Skinner said of Yandle’s response. “I don’t know if he mis-saw the play. I don’t know what he was going at, I was trying to lift a guy’s stick and he put his foot in front of his stick. I got his foot.”

Sabres fans then booed Yandle loudly whenever he touched the puck. It stopped when Barkov tipped Yandle’s shot past goalie Carter Hutton on the power play 58 seconds into the third period.

Evgenii Dadonov followed on a penalty shot after Sabres defenseman Rasmus Dahlin hauled him down. Frank Vatrano then gave the Panthers an insurance goal.

Considering they’ve been in the Atlantic Division for a few years now, the Sabres and Panthers aren’t exactly huge rivals.

But considering the Panthers own the Sabres and how feisty Tuesday’s tilt became, that could be changing.