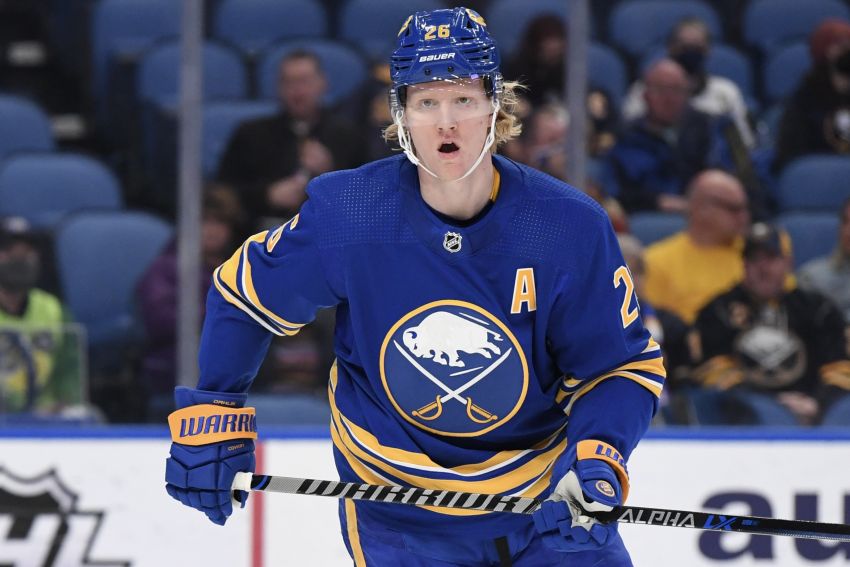 BUFFALO – The Sabres’ blueprint for success is no secret. For about 20 minutes against the Columbus Blue Jackets, they played confidently and loosely, opening up what felt like a commanding two-goal lead early in the third period.

“We got that 3-1 lead, we had a couple of good shifts afterward and then we started changing the way we were playing,” Sabres winger Alex Tuch said following Thursday’s 4-3 loss, a game Jakub Voracek clinched 16 seconds into overtime. “We were playing too much defense, sitting back. We just gave them opportunities that I didn’t think we did in the second period.”

Shortly after Tuch’s goal 12 seconds into the third period, the Sabres started frittering away the lead. While they limited scoring chances, coach Don Granato said, the Blue Jackets were opportunistic.

“We gave up the first goal of the third period five minutes in and that was the first chance we gave up … and then we didn’t give up another one in another 10 minutes,” Granato said. “And both of them ended up in the net. So it wasn’t like it was horrific.”

Brendan Gaunce scored from the left circle at 4:48, a soft goal Sabres goalie Dustin Tokarski likely wants back. Then after Sabres winger Kyle Okposo went off for holding, Oliver Bjorkstrand’s power-play goal tied it at 14:25.

After the referees failed to call penalties against Columbus earlier in the period, the crowd of 8,476 fans inside KeyBank Center howled in disgust when Okposo went off.

“At this point, we have nothing to lose in the third period,” Sabres defenseman Rasmus Dahlin said. “We just have to go out there and stick to our game plan and play loose in the third and just battle our butt off.”

Voracek’s goal from the right circle sent the Sabres to their third straight loss.

Dahlin said he got caught flat-footed on the winner.

Incredibly, the Sabres have lost nine of the 19 games this season they’ve been leading after the third period (10-3-6).

Dahlin’s goal 3:27 into the second period tied the game and ignited the Sabres, who looked sluggish early in their first game following an eight-day break.

“I challenged them in between the first and second saying you don’t have to feel good to play good,” Granato said. “Just fight through it. And I thought we did a really good job fighting through it. You saw lots of chances and the precision wasn’t there probably because of that.”

Dahlin said: “We played loose, we played with a lot of confidence, we battled hard. Yeah, we got momentum there going.”

Okposo scored 18:23 into the second period, putting the Sabres up for the first time.

“We were really hard to play against,” Tuch said of the Sabres’ best stretch. “I thought we were clogging up the middle. We didn’t give them any time or space. I thought our defensemen had really good gaps, our forwards were backchecking hard, we were creating turnovers. When we had it in their zone we were getting chances and putting pucks on net. We were outworking them.”

The line of Tuch, center Tage Thompson and Jeff Skinner buoyed the Sabres, generating a Corsi For of 72 percent (18 shots for, seven against), according to NaturalStatTrick.com.

“Their timing was off,” he said. “I don’t think they ever got into a rhythm tonight. But they were still good. They were still dangerous quite a bit in that game. They have a lot of confidence in each other and showing belief in each other.”

One thought on “Sabres blow late lead to Blue Jackets, lose in OT: ‘We started changing’”