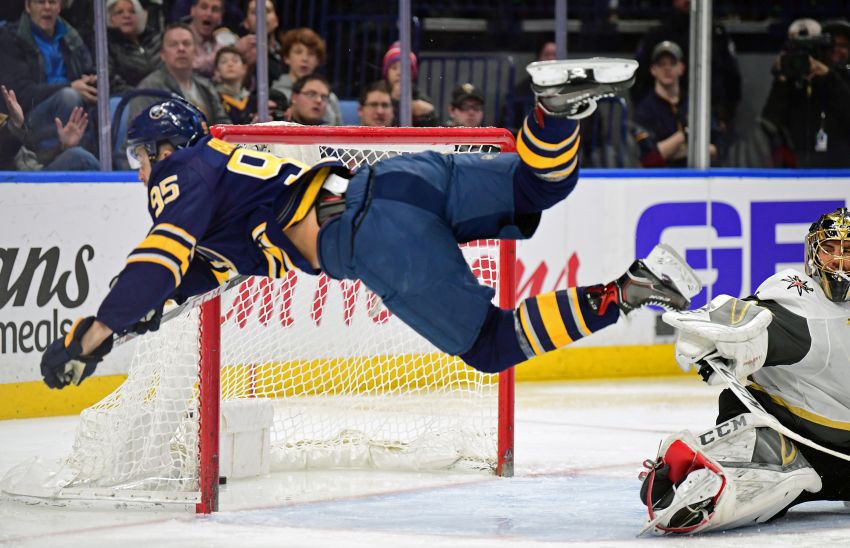 BUFFALO – Early in the third period Saturday afternoon, Sabres winger Benoit Pouliot roared into the Vegas zone, beat defenseman Shea Theodore to a loose puck and quickly dished it to linemate Justin Bailey, who was trailing the play in the slot.

Bailey tucked the puck past Golden Knights goalie Marc-Andre Fleury at the 2:47 mark, then went airborne after tripping on his right pad.

The Williamsville native, who was playing his first game with the Sabres since Oct. 28, celebrated his fifth NHL goal from the ice, pumping his arms.

For about 13 minutes, it appeared Bailey’s nifty score could hold up as the game winner against the Golden Knights, an expansion team with 93 points, 37 more than the Sabres.

“The first goal in this game was going to be huge because of the way the game was going,” coach Phil Housley said following the Sabres’ 2-1 shootout loss before a capacity crowd of 19,070 inside KeyBank Center.

The first-place Golden Knights, of course, are the NHL’s best story this season. Sixty-eight games into their existence, they’re already a legitimate Stanley Cup contender.

They find ways to eke out wins when they’re not at their best.

Sure enough, defenseman Deryk Engelland tied it from behind the net at 15:46, banking the puck in off Marco Scandella. The defenseman had spread out to cover for goalie Robin Lehner, who got caught out of position.

The Golden Knights then won a five-round shootout, getting the winner from center Erik Haula. Their 20th road victory set the all-time expansion record, breaking the mark the Mighty Ducks of Anaheim set in 1993-94.

“We definitely outplayed them in the second and third period,” Bailey said. “We’ve just got to figure out how to close games there.”

Pouliot said: “We played in their zone more than we did in ours, I think we cycled the puck well, we were on them, we kept it simple. … We played better than them and we should’ve won this game.”

While Housley wasn’t satisfied, he’ll take some consolation in the Sabres taking one of the NHL’s heavyweights down to the wire.

“We really didn’t crack at any time,” he said. “We played a pretty strong checking game, there wasn’t much going on. That’s what it’s going to be like down the stretch against really good teams. We didn’t give a lot of time and space. We can build off it.”

Bailey, 22, can certainly build off his performance.

“It’s been a season of ups and downs this year so it was definitely good to get one today,” Bailey said.

After a 21-game goalless stretch in the AHL, Bailey recently started looking his old self. Prior to getting summoned Friday, the former second-round pick had four goals and five points in the last five games with the Rochester Americans.

A high ankle sprain he suffered during his last recall helped derail Bailey’s promising season. He struggled to recover from one of hockey’s trickiest injuries, looking nothing like the youngster who scored 20 goals in each of his first two AHL seasons.

“Those high ankle sprains, they can be fickle,” Housley said Saturday morning. “You can tweak them, it’s a nagging injury. But he’s finally found his stride, and that’s why he’s going to get an opportunity.”

Against the Golden Knights, Bailey showcased physicality and utilized his speed to spark the Sabres.

“I wanted to get him out there more in the first period,” said Housley, who played Bailey eight minutes, 39 seconds overall. “I couldn’t find time. But when he did have opportunities, especially in the second and third, I really thought he brought his speed.”

Bailey said: “It’s definitely an adjustment coming up here, but I think those two things are things I can control, my speed and my size. I just tried to come out here and use both of those.”

“When you miss time like that, you forget how to play a little bit,” he said before the game. “Just doing the right thing, using my speed, using my size, making sure I was hard on the forecheck and letting my skill do the rest.”

Update: With four days between games, the Sabres have sent Bailey and center Danny O’Regan back to the AHL.