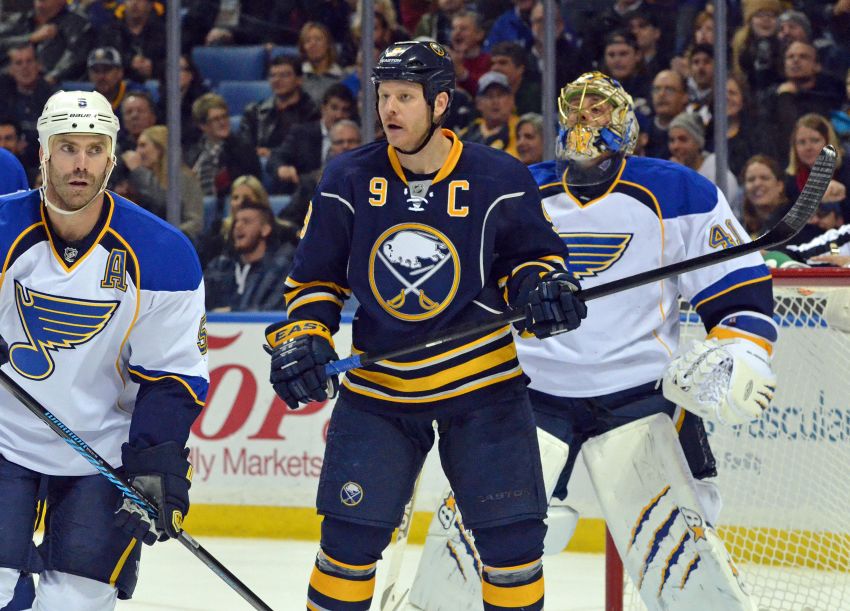 BUFFALO – It was a normal Sabres game night. Players were preparing for their warm-up Friday. Ted Nolan had held pregame his meeting and talked about his plan for the San Jose Sharks.

Then the interim coach saw Joe Battista, the team’s vice president of hockey-related business, coming around the corner.

Battista informed Nolan that goalie Ryan Miller, the scheduled starter, shouldn’t go out for the warm-up.

“I think we got a deal for him,” Battista told Nolan.

Nolan talked to Miller. Then Battista came back.

“Same thing goes with Steve Ott,” he told Nolan. “There could be a deal with him. Tell Steve.”

Nolan then discussed what was happening with the franchise netminder and captain.

“At that point we weren’t 100 percent sure if they were going for warm-up or not, and then about five minutes later Joe came back again and said, ‘It’s done. Both of them are traded,’” Nolan said.

The blockbuster deal with the St. Louis Blues rocked the dressing room about an hour before the Sabres’ 4-2 win inside the First Niagara Center.

“It’s never happened to me in pro hockey,” said Sabres defenseman Mike Weber, Ott’s best friend. “You go from everyone getting ready to get dressed for warm-ups to a little bit of mass chaos, trying to figure out what was going on.

“Obviously, boys were asking a lot of questions and not a lot of info was getting kicked to us. Obviously, we didn’t even know they were traded. We heard that they were getting held out because something was close.”

Still, Miller and Ott, who should make their Blues debuts tonight in Phoenix, stayed for the game. The two are highly respected and enormously popular. Some emotional goodbyes followed.

“You could really see it on Drew Stafford’s face the most,” Nolan said.

Defenseman Tyler Myers said he had never experienced a tougher day off the ice. Weber and Ott are so close they consider each other brothers.

“I grew up with Stevie,” Weber said. “It was a dream come true to have him traded here and to play with him for the last year and a half. But in the same breath, as a hockey player and a brother to him, it’s nice he’s going to be going to get that chance to compete for the Cup.

“Hopefully, he gets that experience and we’re able to make a good offer in the summertime and bring the boys back.”

The Sabres quietly won their third straight game Friday for the first time this season.

“It was a tough way to go into a game,” Myers said. “But the way we responded, it was nice to get a win on their last night.”

Weber acknowledged the trade was “in our mind all night.” When the Sabres honored both players with video tributes, it was “tough to hold back the emotions,” he said.

“It’s probably the worst part of the business losing a friend, teammates like that,” Weber said.

He added: “Right now, it’s nice to be winning with everything else that’s going on. That’s a nice distraction in itself. It’s tough.”